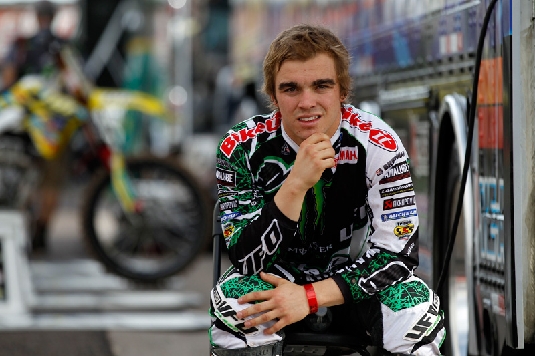 Zach Osborne: In expectation of a stellar season…

Monster Energy Yamaha’s Zach Osborne stands on the edge. The American is the sole waver of the Stars and Stripes in the FIM Motocross World Championship and after nearly four years as part of the Grand Prix circus the 22 year old is staring at his last possible chance to lay his hands on an MX2-GP world title. The fact that the Virginian has factory status as part of Yamaha’s six-rider-strong assault on both FIM Motocross World Championship categories in 2012 is further indication that Osborne is on the threshold of something very promising indeed. Two podiums from four appearances in the AMA West Coast Lites Supercross series this January adds to the sense of expectation for the coming months where he is likely to go head-to-head with names such as Herlings, Searle, Van Horebeek and team-mate Arnaud Tonus for the crown.

Thrown in at the deep-end mid-GP season during 2008 for the Utag Yamaha crew (now the Dixon splinter of the Monster Energy Yamaha set-up), foiled by injury in 2009 and partially in 2011, Osborne still managed to pack-in a comprehensive British Championship title in 2010, GP podium results for the last two campaigns and the prestigious Marty Moates Cup at Glen Helen for his home event in 2010 for best performing American. His victory at the Grand Prix of Turkey in 2009 is still a career highlight.

Osborne has been a Yamaha regular since his arrival in Europe where he has won fans and admirers for his approachable demeanour, dry sense of humour and a riding style that veers on the commendable side of ‘wild’. An electric starter, Osborne also makes the YZ250F work hard, showcasing the durability of the machine and its potential across the diverse terrain of the Grand Prix trail. Here @thereal338 speaks about his recent supercross adventure and the upcoming opportunity ahead…

Zach, it was a calculated risk to do Supercross during the GP off-season but what advantages did it carry for you?
ZO: Fitness, confidence and something I wanted to do, even from last year really. We had talked about it before but now the timing was right. In terms of the physical demands doing those races was about a maximum performance thing because your heart rate is so high and you are in an intense environment for such a short space of time. What we did in the U.S. will help with my intensity, my fitness and my sharpness coming into the season.

We’ve seen Gautier Paulin and Ken Roczen indulging in some supercross races pre-GPs and it seemed to do them good…
ZO: Yeah, I think so. For me, it was a good opportunity to get some time on the bike, good exposure for the sponsors and also nice to have the chance to race on U.S soil and in front of the Supercross fans again. We had some good help from Yamaha U.S.

Can you explain a little about how you set up your YZ250F for Supercross compared to motocross?
ZO: Well, the engine is identical. The only big difference is that here we were not allowed to use some of the carbon components that we can bolt on in Europe. The gearing is the same and the suspension is much harder than I would have for the GPs or motocross. Obviously you are pushing the bike all the time and with so many jumps on such a short circuit the set-up has to be different to cope with that. We worked a lot on the suspension and did a great job with Ohlins in the last couple of months. It has been a big effort, especially by people like Cosworth, but I have never been happier with the Yamaha than with the race bike I have now.

How long did it really take to get back into the Supercross ‘swing’?
ZO: It took me about six weeks to get my timing ‘down’ and get to a position where I could turn laps and then turn a lot of laps. It has been an intense process because I only started riding in the middle of October and that was after a two-month layout with a shoulder injury. It was a quick transition but it went well. During the last three weeks I felt like I was ready to go. I felt like I was up to 22-23 laps in my motos and felt solid at a good pace on what was a gnarly track.

Supercross is obviously a one afternoon-evening hit. Each event must pass pretty quickly…
ZO: It goes by really quick. At a GP you can be at a circuit for four full days. Here you arrive Friday afternoon, get the bike out, get Tech control done and then most of Saturday goes past so fast that you don’t get time to blink. You cannot beat racing in front of 60,000 people and be on the same stage as the big guys in the sport. It has always been a dream of mine to race supercross in the SX class, at the highest level. So it is motivating to be here. If you come into that stadium and see all the show…if it doesn’t get your blood going then nothing ever will.

The first lap of a main event seems crazy with many riders jostling for space and a myriad of obstacles to contend with. What’s it like?
ZO: If you are at the front then it is not too bad, it almost seems ‘quiet’ but in the pack it is chaos. Everyone is dicing because they don’t want to let the ones in front of them getaway and need to block those behind them. It is bedlam on the first lap when you have twenty guys hitting a triple all at the same time. It can get wild!

With the tracks being so tight can you still line up a pass or is it a case of banging bars to overtake?
ZO: A bit of both but it is more of a block-pass situation. You can’t really set it up a few corners before, you just know in the moment when it has to happen. When I was chasing Rattray in Phoenix there were a few places where he was a little bit faster than me and then some places where I was quicker than him so it was a give-take every lap and it was harder to line him up. Looking back now I should have been more aggressive in the first few laps than I was.