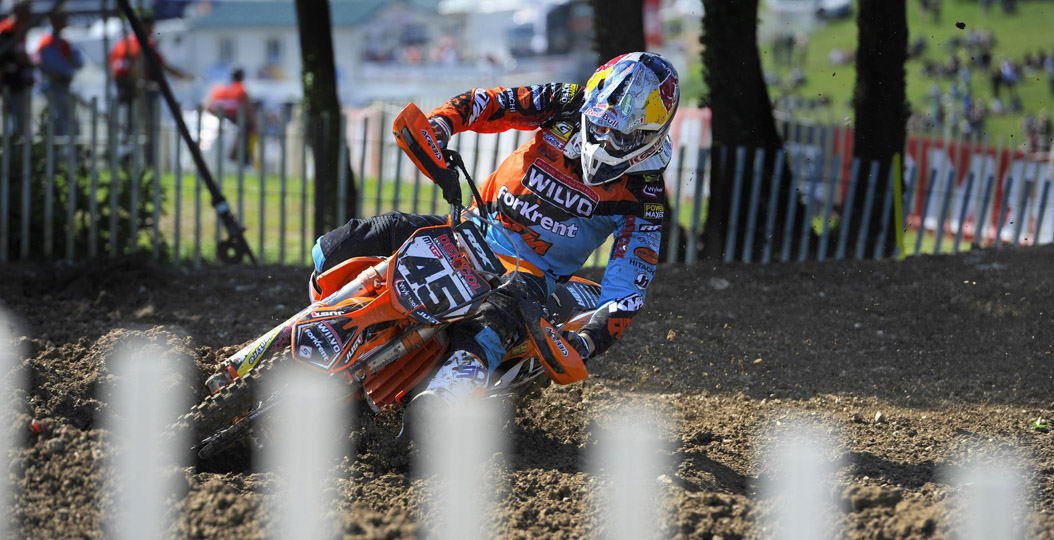 Jean d’ Angely, France – 2 June 2014: The Wilvo Forkrent KTM team made the 800km trip through France to the popular St Jean d’Angeley circuit for round nine of the World Championship. The track looked immaculate and the spectators descended on the circuit in their droves on both Saturday and Sunday, creating the customary mix of French excitement and anticipation.

Qualifying race:
Both Matiss Karro and Jake Nicholls made shocking starts during qualifying with Nicholls in 19th and Karro in 21st. With the track being so difficult to pass on it was going to be a tough race for both riders.

Karro taking a more aggressive approach, managed to force his way through into 12th by lap six but as he attempted another pass he came together with Guarneri and hit the deck. After remounting in 18th he could do nothing more to gain places during the remainder of the race.

Nicholls rode a sensible race, gradually making passes on the narly hard-packed track and with consistently fast laps he eventually progressed all the way up to 11th at the flag.

Race 1:
Karro followed last week’s holeshot at Matterley Basin with another great start, rounding the first turn in 2nd place behind Cairoli. Teammate Nicholls had unfortunately crashed at the end of the start straight and was in last place when he remounted.

Chasing hard and closing in on the pack and passing Leok for 19th, Nicholls lost the front wheel in a tight left hand turn and crashed again, dropping back outside the top twenty. With much of the field lapping at a similar pace, it was tough to make up the lost ground. Managing to make a couple of passes towards the end of the race, he had to be satisfied with 20th at the flag.

After losing a couple of places in the first few laps Karro looked steady and comfortable in 4th place. Then on lap seven he made a small error that left him on the deck. Rejoining in 10th and hoping to make up some time, just a couple of laps later he then accidentally hit neutral and gave up another two places. Although managing to gain one place back he was left to cross the line in 11th, ruing the error that cost him a much better result.

Race 2:
Karro didn’t make such a good start in race two and was down in 13th. Nicholls run of bad luck continued with a clutch problem forcing him to retire after just two laps into the race.

Karro was lapping at a good pace and gradually picked off one rider after another and by mid-race he was in the top ten. Not quite finished yet and after passing Teillet for 9th he started to chase down 8th. On lap thirteen he was handed the position by Pourcel and still pushing hard, the Latvian held his nerve for the last few laps to finish in a fantastic 8th place, giving him his best result of the season with 9th overall.

Commenting on the weekend Matiss Karro said: “This track is not really my sort of track but I have good memories from last time we were here. First race I had a mega start and was running top four but just couldn’t relax and went down and ended up 11th. The second race I didn’t have a good start but the main goal was to finish the race with no crashes, which I did. I found a good rhythm and finished 8th and then 9th overall, which I am happy with. It was a good weekend – I just need to focus on not crashing and I will have even better weekends.”

Jake Nicholls added: “That was a nightmare weekend, very frustrating. The first race I clipped the gate and it disengaged my holeshot button and then I went down at the end of the straight. Then I dropped it again after making a pass on Leok, which really ruined my race. The second race I had a problem with the clutch and also got a stone stuck in the front brake. I now need to put this weekend behind me and focus on Maggiora in two weeks time.”

Summarising the weekend, Team Manager, Steve Turner said: “A good weekend for Matiss but a disaster for Jake. Matiss had another superb start in the first race but had another silly crash which prevented him getting a top ten. In the second race he rode really strong and kept it on two wheels to take a hard-earned 8th, which is his second in two weeks.

“Jake had a bad first race with two crashes, but the DNF in the second race completely destroyed his day. The whole team works so hard to make sure we have no reliability issues and this problem has kicked us in the teeth to be honest. We have the rare luxury of a weekend off now, after which we will be back 100% focused in Maggiora.”