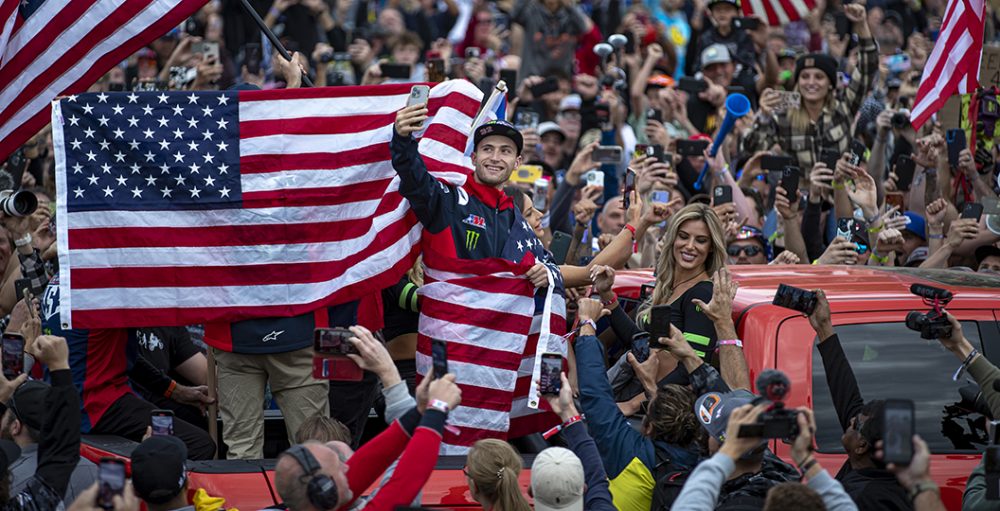 The 2022 Monster Energy Motocross of Nations is a crucial outing for Team USA. Starved of success at such a historic event, a streak of losses could end in less than forty-eight hours. Running Eli Tomac, Justin Cooper and Chase Sexton on home turf is a true statement about Team USA’s desire to get the Chamberlain Trophy for the first time since 2011.

The miserable outing that Team USA had at RedBud at the 2018 Motocross of Nations will only fuel the trio this weekend – they’ll be desperate to avoid falling into that same pit of despair. There is no reason to think that the United States would struggle again, as they are fielding their two strongest 450F riders who pushed each other to an incredible level in the 2022 Lucas Oil Pro Motocross series. Such speed could see Eli Tomac and Chase Sexton sweep the individual motos and remove all of the pressure from Justin Cooper, who may only need to post a single solid result.

Playing the ifs and buts game is difficult at the Motocross of Nations, as one unforced error can completely change the dynamic. The dirty little secret about this event is that the depth is not exceptional though and thus one would presume that both Tomac and Sexton will perform remarkably well as individuals. Consider that some of the strongest Grand Prix stars, like Tim Gajser and Jeffrey Herlings, are not even there and it feels as though everything is slotting into place for the host nation. Crucially, the riders seem to be in good spirits as well.

“It’s great to have a redemption round if you want to call it that,” Tomac stated in today’s pre-race press conference. “2018 was not good at all. We are here and I have a lot of confidence in our team. For myself personally, it was a great year both indoors and outdoors. We are as ready as ever. It very well could be [my last appearance for Team USA] because, as of right now, I only have a supercross-only contract signed. We are just going to give it our all and that is all that we can do. That is the mindset that I have got [entering the weekend].”

“I do not think there could be a better storm for me, with it being my first Motocross of Nations and just two and a half hours from where I grew up,” Sexton stated whilst radiating the same positivity as Tomac. “The weather looks good. I think that there might be a bit of rain on Sunday, but everyone has to ride the same thing. I think that we will be able to come together this weekend and, if we can ride like we have been riding all summer, then we should be in a good spot. I am super excited, overall, and thankful to be up here with these two guys. We have a goal at hand and that is what we are focused on.”

It was obvious that Tomac and Sexton were going to fill the MXGP and Open berths for Team USA, but that MX2 position was a source of debate for many. Christian Craig and Justin Barcia were very much in the mix before Roger DeCoster eventually settled on Justin Cooper to fill the role. Cooper impressed in his very first appearance back at the 2019 Motocross of Nations though. Not only did he win his qualifying heat by some margin, but he also pushed through a broken bone to salvage valuable points on Sunday. Reflecting on that weekend indicates that he is ready for whatever the seventy-fifth edition of the event may throw at him.

“I think that this weekend will be a little bit easier on us, just because it is in the USA,” Cooper stated in the media event. “I definitely took a lot away from Assen, both good and bad. It was an up-and-down weekend. With it being my first time at the ‘Nations, I learnt from everything that I encountered there. I am looking to take that experience into this weekend and start on the right foot tomorrow. It is going to be one of the biggest races, yeah, and it is in the USA, so we are going to have a lot of the fans behind us. We are going to try and keep our focus on the track and the task at hand.”

There are very few reasons to bet against Team USA, to be really quite frank. Concerned about the previous form? The 2018 Motocross of Nations was a horrific showing in every sense of the word, yes, but the other losses involved some cruel luck. There were injuries in 2019, 2017 and 2014. What about 2016? The nation was in line to win before a freak finish-line incident put them in a compromised position and the year prior to that, 2015, they posted an incredible score of sixteen, only to be beaten by the French who were slightly better (they scored fourteen at the end of the event).

The past does not seem so bleak all of a sudden, huh? It’s that fact that every fan should bear in mind when watching Sunday’s motos. If Team USA do win, it will make the emotion and sense of occasion even greater. The 2022 Monster Energy Motocross of Nations is hours away and I, along with every other fan, can hardly wait.