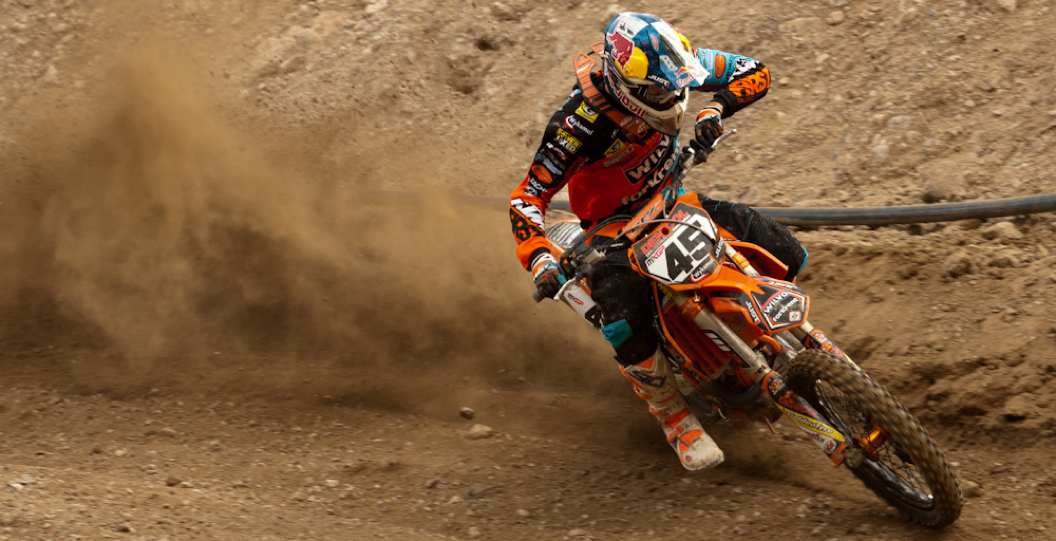 Jake Nicholls hasn’t had an easy rookie season on the 450F, but despite this he has obtained some great results. Various niggling injuries have beset him since the beginning of the season, but he has plowed through the pain barrier each week. However, a health issue has finally ruled him out, as he sustained a nasty finger injury at the fifth Maxxis British Championship round (Whitby).  After coming together with Brad Anderson, it was unknown if Jake would be able to keep the finger, but luckily surgeons saved it. With a tedious recovery process ahead of him, it is unlikely that he will return before the end of the season, which also takes him out of the running for a spot on our Motocross des Nations team.

In a PR, team manager Steve Turner had this to say: “It was a really nasty break and although many people think ‘it’s only a little finger and can’t be that serious’ that’s obviously not the case. Jake’s proved in the past that he has what it takes to fully recover from setbacks like this and I’m sure he will show the same determination again this time.”

The prestigious Red Bud national has tempted a few riders back to the Lucas Oil Pro Motocross series, fortunately, as Nick Wey and Christian Craig will be lining up for the first time this season. Christian retired at the end of last year, and has been working for his father-in-law’s company ever since. However, Craig still rides for fun, and the opportunity to contest a couple of nationals on the Geico Honda team (the squad that his father-in-law owns, also) was too hard to pass up. Nick Wey’s private team was on a supercross only deal, but they picked up a sponsor that will help them to get to Red Bud and Budds Creek, so he will be at those rounds.

When Justin Barcia bowed out of the Lucas Oil Pro Motocross series with an injury, the Muscle Milk Honda team began actively looking for a replacement rider. Many names were chucked into the ring, as Ben Townley, Nick Schmidt and Tommy Weeck were all considered. All riders currently have ties to Honda, so it would have been a seamless switch. However, in the end the Dan Betley managed crew elected go to with Swedish rider Fredrik Noren, who has been the top privateer in the 450MX class thus far on a KTM. Noren will only get to ride the bike once before Red Bud, so don’t expect him to set the world alight. But over time we expect him to get more accustomed to the bike, and make more of a splash.

The FIM announced the provisional 2015 FIM Motocross World Championship calendar earlier today, which has some intriguing changes, such as the inclusion of two Argentinian GPs. We expect this calendar to change a lot before the start of the new season, so don’t go making any plans based off of the below schedule. But, this gives you an idea of what to expect: