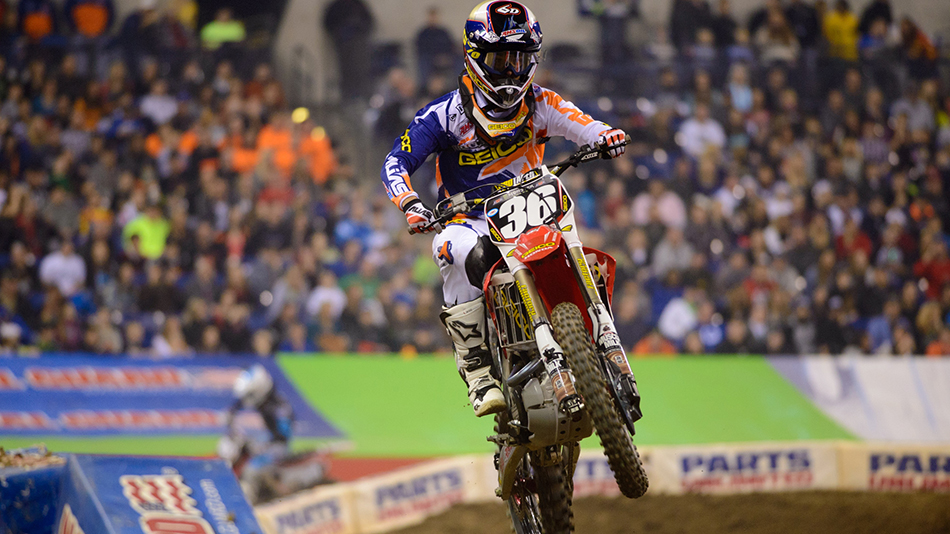 With the British motocross season now in full swing, the news has been coming in thick and fast from all across the globe. Unfortunately, some riders have already succumbed to injuries, whilst others are still struggling with their problems from the beginning of the season. You can catch up on all of the news from the world of motocross by reading this edition of the ‘Weekly Wrap Up’.

Before the first round of the 2014 Maxxis British Championship, a lot of people had tipped Martin Barr to challenge for the MX2 title. However, his title aspirations went up in smoke at round one, as he got taken out in race two and hit his hip and head, which proved to be very painful. So, rather than continue, he sat out instead of risking further damage. Fortunately, some x-rays have shown that there are no broken bones, but there is muscle and ligament damage. It is unknown at this time whether he will return for round one of the MX Nationals or not.

Unfortunately, the poor season that the Geico Honda team has had is not getting any better, as Blake Wharton is going to be out of action for the next two weeks. Blake tweaked his knee in the days prior to Detroit; the damage caused will require surgery. Wharton will definitely miss the next two rounds, but then plans to return for the two rounds in New York and Las Vegas. In more Geico Honda news, Eli Tomac is still questionable for this weekend, as he continues to struggle with his shoulder injury from earlier in the year.

The Pro Nationals Calls It Quits:

It was not exactly surprising to hear that the Pro Nationals had been reduced to just one round for this year, as rumours have been circulating for months. However, it is unfortunate, as a lot of riders have now been left scrambling trying to find somewhere else to ride this year. Matt Bates has stated that other federations have made it impossible for him to continue; so this was his primary reason. He also alluded to the fact that there are not enough top quality venues in the UK to host the events. It isn’t all bad news though, as there will be a ‘Pro Nationals Festival’ at Weston Super-Mare in early June.

The Monster Energy Supercross season will roll across the border, and into Canada, this weekend for the twelfth round of the title fight. At the moment, the 450SX title fight is not as entertaining as it once was, as Ryan Villopoto now has a thirty point lead in the championship over Ryan Dungey. With this in mind, the Red Bull KTM rider has to start cutting into that gap immediately. James Stewart and Ken Roczen are out of the title chase, to be honest, but they will be contenders for the main event victory, undoubtedly.

In the 250SX East class, Adam Cianciarulo has a comfortable gap of seventeen points at the moment. However, the title fight is far from over, as his two accomplished teammates, Martin Davalos and Blake Baggett, will be nipping at his heels until the very end. However, if the rookie can steal another win this weekend, it would be great for his confidence moving forward. Remember to keep an eye out for Justin Bogle, the Geico Honda pilot is on the rise at the moment, and will want to build on his Detroit performance, and challenge for another win.

MX Nationals, Round One – Culham:

Finally, after months of hype and intrigue, the inaugural MX Nationals series will fire into life on Saturday at Culham. Obviously, everyone is interested to see how the event goes, as a new series will always generate a lot of interest. With tickets costing just six pounds, you would think that there will be a strong crowd on the Culham hillside. Of course, the main draw for the crowd will be the Kristian Whatley/Max Anstie battle, which should be very exciting.