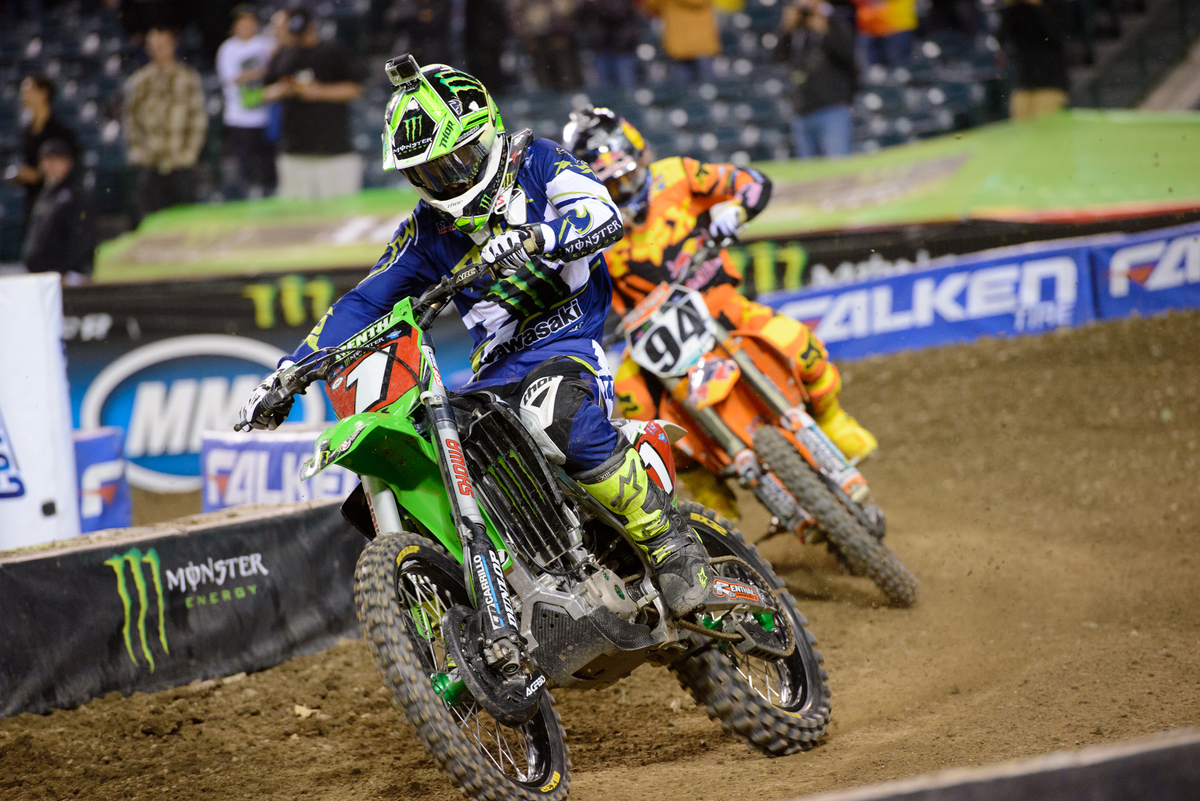 AURORA, Ill. (January 24, 2014) – Discount Tire Racing/TwoTwo Motorsports’ Chad Reed said that his previous 41 450SX Class Main Event wins came much easier than his 42nd. In Saturday’s Monster Energy AMA Supercross, an FIM World Championship, race that saw three different leaders, Reed emerged victorious after early leader Ryan Dungey crashed and handed the lead to James Stewart. Reed moved from fourth place to third with Dungey’s departure and then picked off Ken Roczen before setting his sights on Stewart. Late in the race, Reed took over the lead, passing long-time rival Stewart and rode to his 42nd Main Event win. In doing so, Reed became the first rider in the sport’s history to win on four different bikes: Honda, Yamaha, Suzuki and Kawasaki, and he became the first rider in history to win a Main Event in 10 different seasons.

“In Anaheim, I felt good,” said Reed. “For me it was a solid day and the fact that I was on the board in both timed qualifying practices was great, normally I’m happy with a top 10, and we just carried that momentum into the night. I didn’t get the best of starts in my heat, but was able to get fourth. I got a better start in the main and sat about sixth off the line. I was just happy and relieved to finally ride to my full potential, which is what I’ve been striving for in the first two races. To do it and to actually get a win while doing it was awesome. Now I’m just going to have a good solid week and hopefully carry that momentum into Oakland and try to get a back-to-back win.”

Reed turned the page on another compelling chapter in the parity-driven Monster Energy Supercross, becoming the third different winner in as many races, setting the stage for this weekend at Oakland’s O.co Coliseum.

Reed was winless in 2013 and had not won in Anaheim since February 2, 2008. Is he back? The wily veteran has been on the podium twice this season and currently sits third in points.

Roczen, who won the season opener in Anaheim, moved into the points lead, edging out three-time defending Monster Energy Supercross Champion Ryan Villopoto by one point. Through the first three races, Dungey, Reed and Roczen have been on the podium twice. The top five riders are separated by just five points heading into tomorrow night’s race.

Yoshimura Suzuki Factory Racing’s Stewart celebrated his first podium finish of the 2014 season at Anaheim last weekend. Although Stewart still struggled with lingering illness, the Yoshimura Suzuki rider pushed through it and raced his Yoshimura Suzuki RM-Z450 to a well-earned second place at the second of three Anaheim rounds.

Although Yoshimura Suzuki’s Stewart wasn’t 100 percent all day, he still qualified third fastest in the premier 450SX class in Anaheim. He went on to get a good start in his six-lap Heat Race and pulled into the lead right off the bat. Taking advantage of a clear track, Stewart pulled a gap and rode six perfect laps on his Yoshimura Suzuki RM-Z450 to claim his first Heat Race win of the season. In the 20-lap main event, Stewart again got a good start on his and slotted quickly into second place. He went on to lead the race and fend off aggressive attacks from the competition before eventually finishing second.

“In all honesty, I was just a tick off all day,” said Stewart. “I was happy to win my heat race and I rode pretty good in the Main Event. I led for a little while and the Yoshimura Suzuki RM-Z450 was running great. But then a guy got by me with about three or four laps left. It’s frustrating to lose like that, but I’m happy to be on the podium for the first time this year. I’m still fighting this cold but I’m getting stronger. So right now, it’s about limiting my mistakes, not throwing it away and getting what I can get. I’m just looking forward to going to Oakland and making things happen.”

Three-time Monster Energy Supercross Champion Villopoto came into Anaheim with the points lead, but a fourth-place finish dropped him to second overall, just one-point behind Roczen.

“We continued to test this week and are looking forward to Oakland,” said Villopoto. “We lost the red plate again but there is still a lot of racing left, and we look to leave Oakland with them back on.”

Team Honda Muscle Milk’s Justin Barcia dropped to seventh in the points after a less-than-favorable race last weekend but is determined to make his way to the podium this weekend.

“Today didn’t go anywhere near how I wanted,” stated Barcia. “The track was pretty challenging and I ended up going down during both practice and the main event. Luckily I got third in my heat, but after the start of the main I was riding tight and making a lot of mistakes. My front end tucked in the turn at home plate and I lost a lot of time. I’m disappointed in how this season has gone so far but am determined to get on the podium.”

GEICO Honda’s Wil Hahn knows he can tap into the speed and style he had last year when he won the 250SX Class Championship, but he’s quickly learning that the 450SX Class has a steep learning curve.

“I think I made a lot of progress tonight speed-wise, and even though the results didn’t show it, I feel like I fixed most of the little things I’ve been struggling with,” Hahn explained. “I had another mediocre start but made some good progress up through the pack. But I tipped over at one point and lost some spots. I need to ride like I did last year when I won the championship and get back to having fun.”

“The weekend was decent, track was really tricky and it took me a while to figure it out,” said Tedesco. I was still figuring it out even in the heat race and the semi. I made it through in the semi and then in the main I got a bad start once again. I was kind of struggling with my starts all day. I kind of had to fight for it. I battled through for a 13th which is not where I want to be, but with the bad starts and stacked field it’s kind of tough. I need to work on my starts this week and gain a little bit of speed to hopefully get into the top 10.”

Monster Energy Kawasaki’s Jake Weimer finished 10th in Anaheim and expects to move into the top-10 in points after tomorrow night.

“I really focused on my starts this week,” said Weimer. “I’m happy with my speed but I need to be up front with the guys from the get go and avoid the carnage.  If you don’t get the start it can be tough to move through the pack quickly. With a clean start we should have a good result in Oakland.”

Despite leading 40 of the 45 laps in this year’s Western Regional 250SX Class Championship, Troy Lee Designs/Lucas Oil/Honda’s Cole Seely has only manufactured one win. That came last Saturday night in Anaheim when he turned in 15 perfect laps en route to the fourth win of his career. In the first two races of the season, Seely was well on his way to victory but was passed on the last lap by Rockstar Energy Racing’s Jason Anderson. Seely put together 20 solid laps and not only picked up his first win he moved into the points lead.

“It was an awesome night for our team,” stated Seely. “We have done so much testing before and during the season and spent countless hours at the track, so it is nice to have the hard work pay off. I had some breathing room on the last lap, which was nice. We are going to keep the momentum going headed into next week.”

In Anaheim last week, initially Anderson followed Seely across the finish line in second place, losing just three points. However, he was later penalized two positions for jumping through a wheels on the ground cross flag for a downed rider. As a result, Anderson fell to fourth place and lost the Western Regional Championship points lead. Rookie Cooper Webb was credited with second place, the first podium of his career, while Troy Lee Designs/MAVTV Honda’s Malcolm Stewart moved up to third.

“Today was alright, I salvaged a 2nd but received a penalty and was docked 2 positions,” said Anderson. “I felt like I still dodged a couple bullets tonight and I need to keep my momentum going. I want the championship at the end of the year.”

Webb secured the first podium finish of his career and sits fourth overall.

“It was a good race for sure. The day started off kind of rough, but I put that behind me. Went into the main and got the holeshot, tried to stay up there and did for about eight laps. I tried to stay right there with but I got little nervous and just wanted to get on the podium so bad! I kind of just focused on staying up. Those guys are riding good so it felt great to get on the podium!”

Just a week after earning his first podium of the season, GEICO Honda’s Zach Osborne finished in eighth place in Anaheim.

“It was a bad deal, but I should not have been in that position to start with,” said Osborne. “I had another bad start and I don’t know why. I’ve done everything I know to get better. After the crash I didn’t ride well. I was tight and just let it get away from me. I didn’t have a great week leading into this race—I only rode one time—so maybe that hurt me. I’ll get back to the regular schedule and just keep working hard. That’s what I need to do.”

An optimistic Dean Wilson hopes to rebound after suffering a crash while riding at the front of the pack in Anaheim dropped him back to 15th place. He rallied and finished seventh overall.

“We’re giving it everything we have,” said Wilson. “No shortcuts are being taken and I’m really not happy with anything short of the podium. We’re down in points but that can change quickly. I’ve been in the hunt before and know what I need to do.”

Monster Energy Pro Circuit Kawasaki’s Justin Hill, who is in his sophomore year of professional racing, finished fifth in Anaheim after staging a late-race comeback.

“Anaheim was really disappointing,” said Hill. “I almost had the holeshot and know I have the speed to run up front. I poured my heart into that ride to come back to fifth. With a start in Oakland I expect to be on the box.”