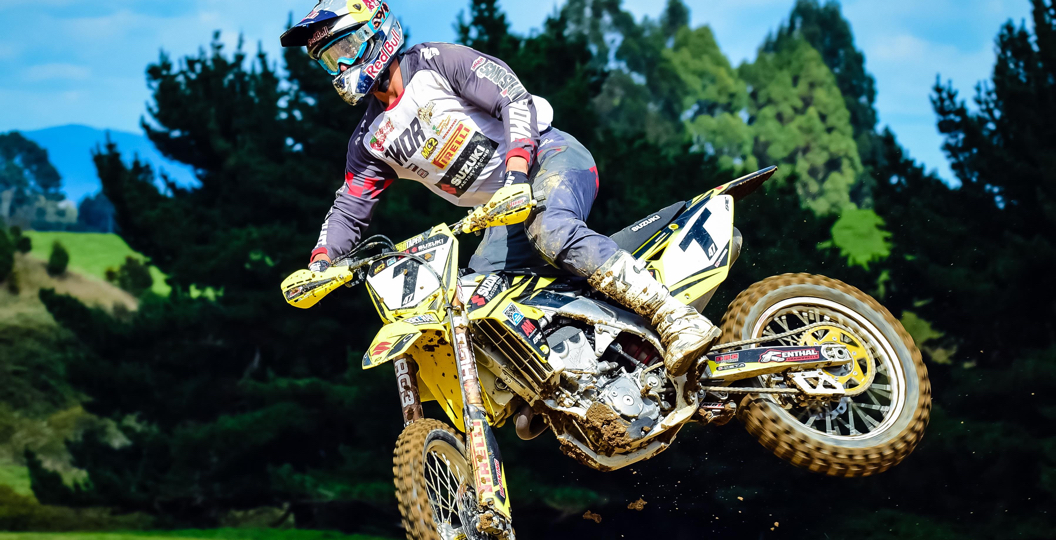 Australian Todd Waters has climbed to within three points of the New Zealand MX1 Championship lead following a strong performance at Sunday’s third round of four near Rotorua.

The 25-year-old MC2 Suzuki Racing Team RM-Z450 rider began the day 14 points behind series leader and fellow Australian Dean Ferris, but, with a 2-2-3 scorecard, he finished the day runner-up to defending national champion and current series leader Cody Cooper, putting him well within strike range for the title with just one round and three races to come.

Said Waters: “It’s going to be a good final round. Cooper and Ferris are on top of their game and I will need to step it up. I nearly won the day at round two and I was again runner-up today, but behind a different rider. Perhaps I’m saving my best for last. Hopefully I can pull something out of the bag at the last round.”

Waters’ team-mate Brad Groombridge was also impressive on Sunday, finishing the day fifth overall. He is also fifth in the series standings and will be looking forward to racing on home turf at the final round next weekend.

MC2 Suzuki Racing Team Manager Andrew Hardisty said: “It was a fantastic day for Suzuki and the progress today was extremely valuable. It comes down to three races now and we know how to win. It’s just a matter of converting the right amount of speed into the right amount of points.”

Riding for the parallel 3Twenty3 Suzuki Racing Team, Rhys Carter also celebrated a podium finish at Rotorua: The 26-year-old crashed out of the day’s racing at round one near Timaru in February and was under doctor’s orders not to ride at round two in the Manawatu a fortnight ago, but he was back to his best on Sunday to achieve his career-first podium finish in the MX1 class at the nationals.

Carter finished 4-3-6 in his three races and, despite scoring no points at the previous two rounds, he is now 14th in the series standings.

“My fitness was not the best because of my time off the bike and that perhaps explains my result in race three, plus I had a couple of close moments, but my aim now is just to achieve some personal milestones, like being on the podium was for me today.”

The fourth and final round of the series is set for the Digger McEwen Motocross Park facility, on the outskirts of Taupo, on Sunday March 20th.