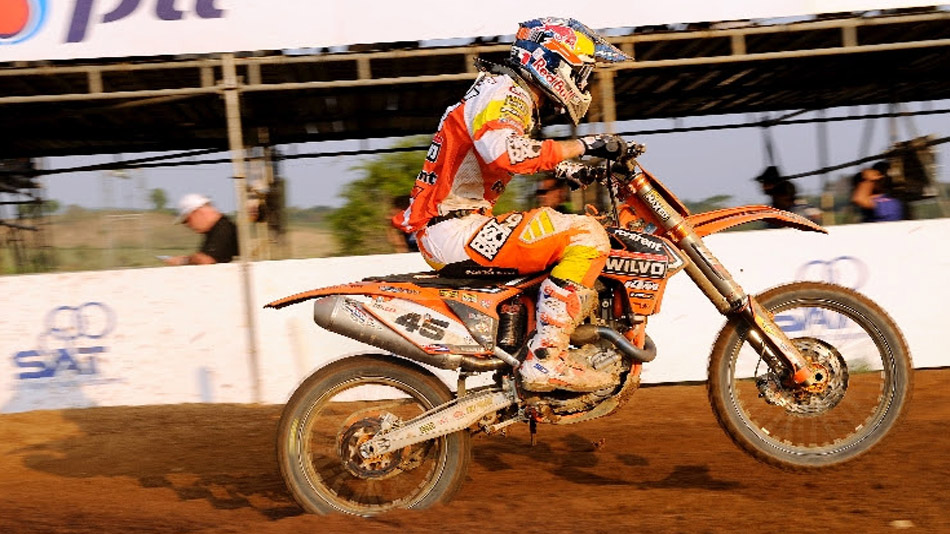 War of Attrition in Thai Furnace

Si Racha, Thailand, 9 March 2014: After the relatively mild conditions in Qatar the previous week, the team headed to the heat and humidity of Thailand for round two of the FIM Motocross World Championship.

Jake Nicholls came into the weekend feeling more comfortable on the bike than in Qatar and was rewarded with 13th place in the qualifying race.

Matiss Karro had to contend with a 26th position gate pick after eventually having to pull out of qualifying with an electrical fault. Having run in 5th place for the first half of the session, it was a major disappointment for all after looking so strong and confident.

Race one escalated into more misfortune for the whole team with Karro colliding with a fallen rider just after the second corner which resulted in teammate Nicholls ploughing into the back of him and ending up with both riders on the ground.

Nicholls was soon back in the action but Karro had to return to the pits for repair to damage sustained to the front of his machine. A lap later, Nicholls had to come in too after suffering a massive crash. After a brief inspection, it was evident that there was no possibility of him continuing the session.

Returning to the track, Karro was fighting to find any pace on his damaged bike and was later forced to retire too.

After a heroic attempt by the mechanics pulling out all the stops to repair the damage to both bikes, Karro and Nicholls were back on the line with 35 minutes of sheer torture to follow.

The track and weather conditions were so severe that many of the riders and bikes would not make it to the finish and it was literally a feat in itself to complete the race.

Neither Wilvo Forkrent KTM riders enjoyed a good start with Nicholls starting in 18th and Karro in 20th, but by the end of lap one both riders had improved to 15th and 16th positions respectively with Karro on a charge and up to 12th by mid race.

Then disaster struck again with Karro landing dangerously short on a big double. The impact was so hard that it damaged the headstock bearings forcing him to completely back off and nurse the bike to an eventual 13th place finish.

Nicholls, still riding in a lot of pain toughed it out to the end of the race and was rewarded with 15th place.

Overall classification from round two in Thailand saw Matiss Karro finish in 17th and Jake Nicholls in 19th position.

Commenting on the race, Jake Nicholls said: “The Thailand GP wasn’t so kind to me for the second year in a row. Saturday went well and I was feeling a bit more relaxed on the bike and qualified well. But Sunday didn’t go quite so well with an unavoidable first turn crash followed by a big tumble three laps later on my own. I hit my head very hard and couldn’t see straight. I wanted to continue after gathering myself together but the bike was too badly damaged.

“In the second race I rode fairly conservatively for 15th place as I was in a lot of pain with my back, elbow and head after the first crash. I want to say thanks to the team for their hard work at this GP. My back will be OK, and once I’m home I will get more physio ready for Landrake.”

Matiss Karro added: “Shame about the bike on Saturday which was bad for my qualifying race and gave me a disastrous start pick for Sunday. My first race start was amazing but from outside you generally don’t get a good start and I ended up crashing into some fallen riders after the second turn. The bike was all bent and I lost position trying to straighten it up resulting in a retirement.

“In the second race I had a bad start but got through to 13th place which was alright, but could have been better if I hadn’t damaged the bike when I landed short on the double. The heat was unbelievable and destroyed me but I managed to get a result.”

Team Owner and Manager, Steve Turner commented: “That was just about as hard as it gets for the riders and mechanics. The heat and humidity is hard to describe and you can’t underestimate the resilience of the riders to be able to race for 35 minutes in those conditions.

“The first race was total carnage with both bikes needing major chassis work, especially Jake’s with the mechanics going through their own hell trying to fix the damage in time for the second race. It was a relief to see both riders finish race two and get some valuable points on the board.

“It’s been a difficult trip to Qatar and Thailand but we can still take many positives away with us; Jake managed to get through the races despite his back injury and even after his huge crash in race one and after two weeks off, I’m confident he can be even more competitive in Brazil. Matiss has had some fantastic starts on his KTM 350 and displayed some great pace at both GP’s.  He has showed that he can ride inside top ten pace when he gets amongst them.”

The team go into the MXGP of Brazil on 30 March with Jake Nicholls in 18th place and Matiss Karro just behind him in 19th in the Championship.