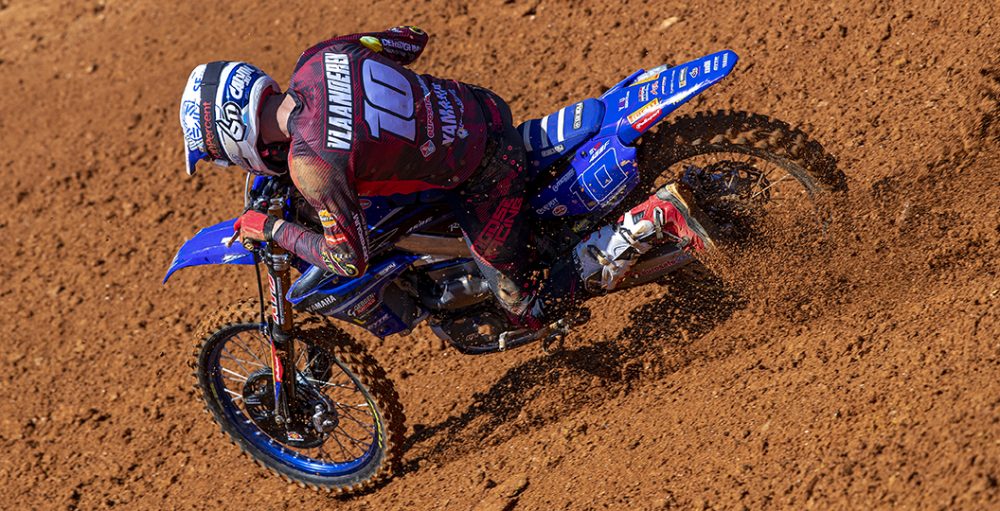 The world is certainly getting smaller, as proven by the fact that there are now Star Racing engines being used in the FIM Motocross World Championship. Gebben van Venrooy Yamaha’s duo, Calvin Vlaanderen and Arminas Jasikonis, are using engines from the American powerhouse in the premier division this season. How does that process work and what are the benefits? Vlaanderen discusses that at length in this exclusive MX Vice interview from the Grand Prix of Portugal.

Vlaanderen is coming off of a season-best finish in Portugal; he logged an eighth and a sixth for seventh overall. Most importantly, he proved to himself and pundits that he does have top-five speed after a wayward start to the term. The Star Racing engine has seemingly had a significant impact on his programme and competitiveness in the class, as he gushes below. This interview was released as an MX Vice post-race podcast, presented by FLY Racing.

MX Vice: Another very positive weekend. If you start at the back then you make passes, then the second moto proved that you have top-five speed. Happy days.

Calvin Vlaanderen: You say another good weekend like this has happened before, but this is the first good weekend that I have had.

I was impressed at Mantova. I even text you and said you rode well…

I was the only person watching you at Mantova, but I was impressed.

The results do not show that though, so a lot of people do not see it. You see it though! It was solid day today. I am really happy with the steps that we made in the couple of weeks that we have had off. I think that not going to Argentina was a blessing in disguise, because I could get some extra bike time in that I needed. We did a little bit of testing and definitely improved. This is where I should be. I should have been battling inside of the top ten from the very first Grand Prix. This is where Calvin should be, so I am happy and satisfied. Now it is just about making that next step into the top five.

I was a bit worried that missing Argentina, seeing as it has been a month since Mantova, was going to make you a bit rusty. Did you feel that a little bit?

I think so. I do not want to use that as an excuse though. I struggled in the first moto today, just with the fight. I could follow the guys easily – I felt like I was faster than them, but did not have the fight to pass them. I do not want to use not going to Argentina as an excuse, but race time definitely helps with race rhythm and fight. I had that in the first couple of laps during the second moto. I made some good passes and almost got [Pauls] Jonass on the last lap.

It sounds like you have not been happy with how things have gone up until now. I guess that second moto was nice validation that everything is there though?

One hundred percent. The beginning of the season was not great for me. I think that I was outside of the top ten at the first two rounds, so it was not really clicking. I did not change anything in the programme – I just kept doing what I was doing. I knew that once I started having more bike time and getting more comfortable, then things would improve. That is exactly what happened. I will continue like this and just try to get better. I want to get better starts and run up front. That is the next step.

Speaking of starts, you need an engine to do that. Speaking about engines, Star Racing! You have got a Star engine in the bike this year. What are the differences and benefits? What are you working on? I want everything!

It is a really awesome opportunity that we have got this year. I was pushing hard to make this happen at the end of last year, because we really struggled with the engines last year. I literally had one engine and that was the setting for the whole year. I just had to run like that. There are a lot more things that we can change and improve this year. One thing that is tough is communication, because they are on the other side of the world. When we do want to change something then it is a phone call. Sometimes, you can really explain it better when you are face to face. There are some small things that we still need to improve. Honestly though, the bike is awesome. I cannot complain about the power. There is no reason why I should not be winning races and fighting for podiums with the bike that I have now. It is really good to have Star behind us and have their experience helping us.

How does that communication thing work? Do you have a meeting every Monday? If you wanted to talk to someone after free practice, could you have called them then? How does that actually work?

I try to do all of my testing during the week, so that I do not have any contact with them on the race weekends. We do have an engine mechanic this year, who is the middleman between me and Star. Sometimes I like to explain what I need myself, so I will pick up the phone and call Brad from Star to explain what I need. Gareth Swanepoel too, because I have known him for years and he is also the test rider there. That means that he can help me with what I need.

Do you feel like a bit of a factory rider with this engine? Are you that flexible where it is almost like being on a factory team?

It is still not like a factory team. I am trying to make it like a factory team, to be honest, but I have everything that I need to perform. There are still some things within the team that we can improve on, regarding structure and communication. Just being more professional. That is not really my job, but it is definitely like a factory bike. I cannot complain about that.

What is the biggest benefit of the Star engine compared to last season? Where is it a lot better?

It has a lot more power. For me, I do not really need that much horsepower. I just like controllable power and a little more bottom power. Being able to change what I want and really… I was really in a box with what I could do with the bike last year. There are so many things this year and they are improving their bike all of the time. Whenever they improve, they help us improve as well. There are not many weeks where we do not try new things on the bike. We are really just trying to improve all of the time. That is probably the biggest difference.

Are the changes that they make in America immediately effective here? The tracks are very different in MXGP. Do you have to try and bridge the gap to make it perfect for tracks like Pietramurata?

The American riders do like their bikes a little different to me. That is also for them to learn what I like. They have been trying to learn what I like this year – it is new for them as well [the situation]. They are trying to get me exactly what I want. Going to Trentino or something, they do not have any experience with tracks like that. I will just have to use my knowledge to set the bike up perfectly.

If you went to America to do a week of testing with them, it would actually be useless. They would have to come here. You going and testing on an American track would not do anything for you here, huh?

Yeah and there are still some differences. They use different fuel to us, which we are not allowed to use. They use fuel with really high octane that we are not allowed to use. This helps the bike and there are some small differences, like altitude when you are there and things like that. The best thing would be for them to fly here, but that is not going to happen with them being so busy there.

Last thing. Well, you kind of answered it there. Are you expecting to have someone from Star at any races this year? Is that the plan?

Honestly, I have not even discussed that with anyone. It would be really cool and good for me. It would be good to have someone from Star here to help us.