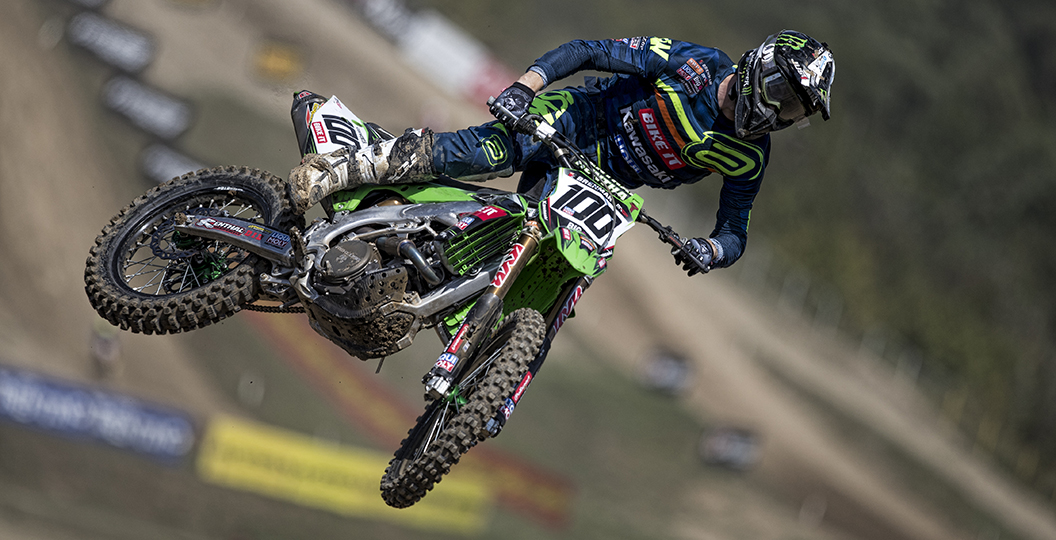 The Grand Prix of Bulgaria, round seventeen of the FIM Motocross World Championship, was good for Tommy Searle. The previous event in Switzerland was full of uncertainty, as he did not have the energy to fight until the end of the motos, but things appear to be on the right track now. All of that is discussed in this exclusive interview from Sevlievo, plus the ongoing debate about the Motocross of Nations.

MX Vice: Solid weekend for you. I do not actually really remember much, as that second moto really stood out. I was just following the leaders and I was like, “He is in eighth.” You actually passed some good guys to get there so, based on how Switzerland went, you are moving forward.

Yeah, it is a big step for me this weekend. I have had a poor last few GPs. In the first race I was actually riding really well and came through. Obviously yesterday I crashed on lap one, so I was in gate eighteen and it was quite difficult to come across here. Even if you get a good jump you sort of got pushed out. I did not have the best of starts, I think around twentieth. There were only twenty-six of us out there, so it could not have really been too much worse than that. I came through and then I got to, I think, thirteenth and I was feeling really good.

Then a huge stone came through my goggle lens and popped it out. I had a lot of dirt coming into my goggles, so it slowed my progress. I did not move forward anymore. I actually dropped a position after that because I was struggling and then I ended up fifteenth I think. In race two it was better. I got a little bit better at the start and then I was riding good. I was following [Gautier] Paulin and then I had [Jeremy] Seewer behind me.

I know that at a lot of races this year I have followed Paulin for the first ten minutes of the race and then I think, “This is good. This is good. I am settled here.” Then I get passed, because I am just not… I just thought, “That is not happening this one.” The team said, “Okay, get him” and I just put the hammer down and passed him, then I put consistent laps in and I actually set my fastest lap of the race with two laps to go. I felt a lot better this weekend compared to last weekend.

I actually passed Shaun on about lap four and then I closed up to Monticelli and Lupino and that is when the stone came through my lens. Then I was just struggling. I kept having to blink all the time to try and get the rocks out. That was why I slowed my progress, really. Look over to there and you can see the lens just hanging out the top. It was a huge rock, so the goggles did their job, but I unfortunately struggled after that.

Obviously last week you mentioned that you were feeling run down towards the end of the races and you said you were going to have tests. I presume you did that. What were the results? Obviously, it did not show this weekend.

No. I had a test last Tuesday. It is difficult to get one in England done, but I had one done and I get the results tomorrow I guess. I just bought some Berocca’s at the airport and I feel a lot better this weekend.

That must be a bit sh*t. Waiting for the results and coming to a race like this. You must have been sat here thinking that you could be really ill and going to struggle or just fine. Just not having that closure must have been a bit stressful.

Yeah. I think last weekend was just a tough weekend in general. I had a little bit going on with the contract stuff. I was probably thinking and just using my energy elsewhere rather than the track. I think it was a physical track. I could have set my bike up a little bit better on the Saturday with how grippy it was and mellowed the power. I did that a lot this weekend. We made a change to make the engine a lot less powerful and then again before second moto made it less power. I think I need to leave it like that, because it is a lot easier for me to ride. I feel less aggressive. The 450s are so fast anyway that with how it was last week… I had it way, way too aggressive. I think that alone was tiring me out.

That second moto was obviously great. How much of it do you credit to Steve Dixon? Would you give him ninety-nine percent of that? He pretty much carried you.

Yeah, Steve pretty much does everything. Other than actually racing, he does it all. He actually mixed up my energy drinks before race two as well, because I was struggling. He did not want me to spill powder on his worktop, so he even mixed my energy drink up for me. He has been helping this weekend. I call him Master Dixon now. He likes me to address him as that. It was a good weekend. Steve is happy with everything. Our MX2 rider, Gustavo, he done well as well.

I think the second race, even I felt when I was riding around… I thought, “I am really riding so much better than I have done.” A lot of times in the races I think I just struggle. Not make mistakes, but I just do not feel myself out there. I actually felt pretty good. I was hitting turns and actually thinking, “Yeah, that is nice. You got that nice.” Normally I do not feel like that in the races.

I don’t know if you want to tell us anything, but ‘Nations? People are literally losing their mind over this. Do you know anything? Anything you want to share? Just tell us something.

No, I do not know. I spoke to Mark and he said he is going to release the team Tuesday, but he has not said what Tuesday. Might be this Tuesday, might be next Tuesday. Might be the following Tuesday. I think it is difficult for him. We will see. Personally, I do not probably think I will be in the team. I struggled the last GP, but we will see. I would obviously love to ride for Team Great Britain. I always do. It is one of the best events of the year. It would be great to be in it. We will see when the team goes out. Either way, I think it would be a great team. I think they have a great chance at the podium.