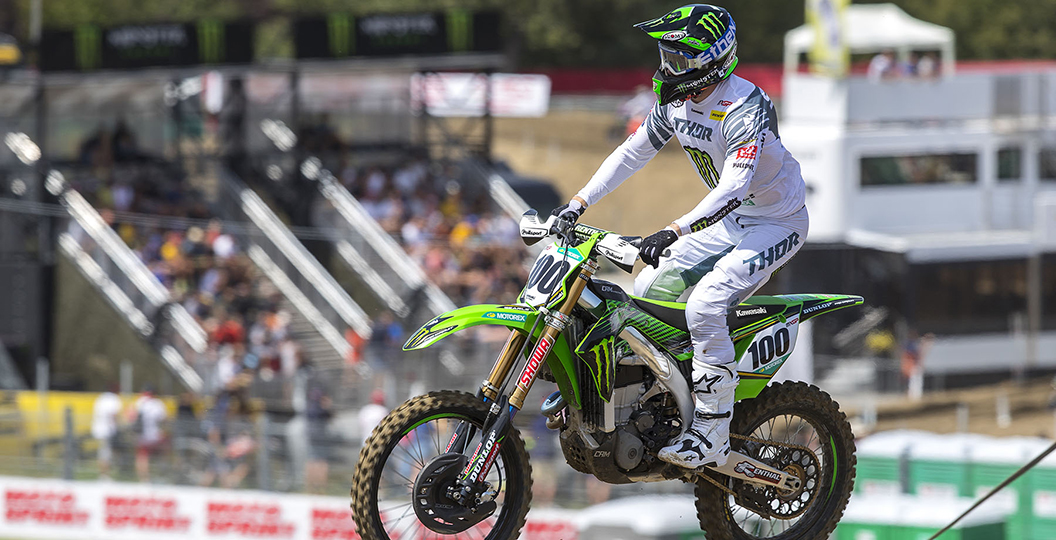 Another week and another positive result for Tommy Searle and the Monster Energy KRT outfit! Searle is really making the most of his time beneath the factory tent, despite the fact that he is struggling with some injuries, and recorded a sixth overall at the Grand Prix of Italy. What did he have to say about that, the Motocross of Nations and 2020? It’s all in this exclusive MX Vice interview from the event.

MX Vice: Who cares about anything other than the fact that you actually get good starts now! Not once, not twice, but three times. I don’t really know where this has come from. I don’t know if this is going to continue, but let’s just enjoy it for now.

Tommy Searle: No, I don’t reckon it’s a coincidence either that I haven’t had a good start in five years and then I get on a factory bike and I’ve almost holeshot three out of three races this weekend. Happy with that. Happy with my starts. Makes my life a lot easier, so good on that front.

I definitely feel like by the second race, obviously that was your third good start, you were a bit more used to it and held your ground a bit more. Looked like you were more comfortable up there.

Yeah. I’m not really comfortable at the minute, because the last eight weeks I haven’t ridden. I haven’t practiced. I haven’t done any testing on this bike. I went back to England for two weeks after Lommel and didn’t ride the week before Lommel. Actually, I haven’t really done any testing with the team and also adjusting myself. I came here just to pretty much do my job for the team, because they employed me to fill-in.

I just thought I’d come here, fill in, but also not do myself any favours, because of the way I’m feeling. To come away with sixth overall, I couldn’t expect that at all. Last week I got fifth at the British Championship… This week I got sixth at the GP. I am feeling a little bit better and getting my confidence back, but it’s really unexpected with the way I’m feeling at the minute.

We said it at Loket, but it’s amazing what a factory bike and factory team does.

No. It’s massive. It’s easy to say, but if I had this bike for the past four years then it would be a completely different story. I’ve got three good starts out of three this weekend and I haven’t had starts like that in the last four years. I got sixth overall probably feeling the worst I’ve felt physically and mentally in my past four years, just because I knew I had this opportunity. I was so excited and then, all of a sudden, I broke my ribs.

I’m racing with broken ribs and I broke my hand. I only broke my hand three weeks ago, so I couldn’t ride at Lommel. It was impossible. I have just been really down about it, because it was just an opportunity that I have but I couldn’t do anything about. At times I was thinking, “I wish I wasn’t even on the team.” Just because I have a good opportunity but I can’t do anything with it.

How are your ribs, hand and everything else now? Obviously not perfect, but can you see a big improvement?

Yeah. They are getting there. I still struggle in the week and on the fast lap… You saw this morning; I was twenty-second in times. Yesterday I was twenty-second in timed qualifying. I just don’t have any intensity and I cannot really push for a lap, but I can get a start and ride my own race. This track was good, because it was quite technical. I felt like almost the less you tried, the faster you went. It played into my hands a little bit, because I can’t really push at the minute. You didn’t have to on this track.

Second time here obviously. Better or worse? On a scale of one to ten, how much do you like it?

The track was a lot better this year, I thought. Maybe it’s because I’m on a better bike. Last year I nearly had a lot of big crashes here, because some parts are really grippy and other parts are really slippery. Overall, I’ve enjoyed the weekend. I’ve got a decent result… Obviously that helps. I’ve got good starts as well, so I didn’t really have to take much risk. I just did my own thing both races and I’ve come away with a pretty good weekend.

How amazing was it on Friday when the ‘Nations team was announced, and you didn’t get one bit of grief? There was not one comment slagging you off. No one was angry. You were just living your best life, I guess.

Yeah! It was quite nice, to be honest. Like I said, the way I have been feeling… I spoke with Mark [Chamberlain] before and I just said, “Don’t even put my name forward.” If there is a problem, I can fill-in sort of thing. I will if they need me, but I’m quite happy at the minute. I’ve been really struggling. I haven’t practiced in eight weeks.

Mentally where I have been at the last three weeks, or six weeks, the ‘Nations was the last thing I wanted to do. I just couldn’t. I have done it plenty of times. I love the race. I was saying this weekend how much… I was even talking to [Adam] Sterry a little bit ago saying, “It will be the best race you ever do.” I do love the race, but it was nice to not get any grief. I was happy for the team to be picked. I think there’s a solid team and they all did really good this weekend as well [laughs].

This is my joke of the day. I have said it to pretty much everyone. Ben [Watson] is injured. Can you imagine if instead of putting Sterry in MX2, Mark puts you on a 250? Can you imagine? The world would literally collapse. Sterry would be setting all of this on fire. The fans would walk to Sweden to set you on fire.

That was good. Thierry [Chizat Suzzoni], the boss here, said he is getting a 250 ready, so we’ll see what happens.

Last thing, do we even want to talk about 2020? Obviously, that is all happening. You are doing good now so are people looking at the results and going, “I forgot about him.” Are they starting to talk to you now?

I don’t know what’s happening next year. I’m quite happy at the minute. I’m not stressed about it. I haven’t really spoken to many teams in the MXGP paddock. I do know that I don’t want to be racing GPs if I’m on a team and I’m struggling all year. I don’t enjoy that. I work hard to get good results, but even more so now when I’m on this team I see that it’s almost impossible to do well unless you are on a factory team. That’s just how it is.

The riders on the teams, the factory teams, are good already. I feel like I’m one of the best riders and, if I had the support, I could race with the best of them when I’m healthy. If I don’t have a factory bike or am not on a semi-factory team with proper support, I’m not going to bang my head against the wall for another two years racing GPs in that sort of environment. Just because mentally it’s not fair on myself. I don’t enjoy doing that. I prepare to do well at the races, but when you have no chance of doing well it’s hard mentally more than physically.