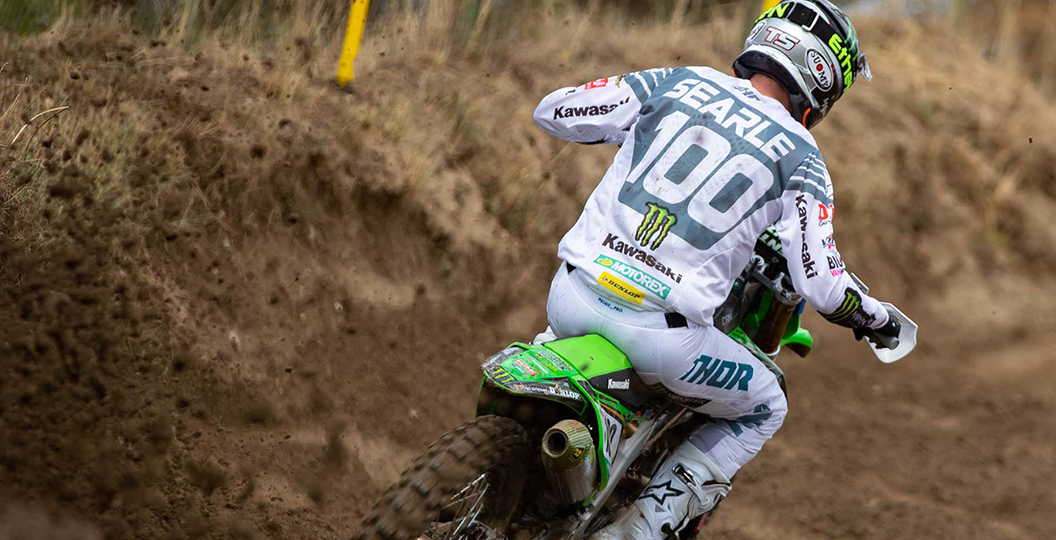 Following a couple of seasons on satellite teams, Tommy Searle finally got on a factory bike again at the Grand Prix of Czechia over the weekend. Loket marked his debut as a fill-in guy for Monster Energy KRT and there were countless positives to pull from the event, despite the fact that he is battling a rib injury. Setting some of the fastest times was a step in the right direction and a good sign of what is to come once he hits one hundred percent at the Grand Prix of Italy in just a couple of weeks.

MX Vice: KRT debut. Big things, lots of focus on you and all of that. A lot of attention and a lot of predictions. I feel like it was successful. Yesterday was the highlight of the weekend, but then the first moto was good. You set the fastest time in sector one on the last lap. Again, positive. The second moto was looking good too until you picked a fight with a fence. Let’s not focus on that though.

Tommy Searle: The weekend, as a whole, had a lot of positives. I have just been struggling with myself. I broke my ribs three weeks ago. Last week I was battling for a top five at the Maxxis [British Championship], so coming in it was just frustrating. I have been frustrated for the last three weeks, because I have had a big opportunity to come here. I think I have one of the best bikes on the track, the best team, and I have not been able to make the most of the situation coming in.

Yesterday I could not have asked for anything better. I struggled a little bit in practice and timed qualifying, but I got a good start in the race. I just sort of rode my own race there. The track was not too bumpy. I did not feel myself on the bike, but I was surprised how easy the race came to me. This bike is a lot, lot better than what I have been riding. They have obviously got a great bike. The way everything works is amazing. It comes a lot easier on that bike. There were some things, like I got the second-fastest lap of the race yesterday, that were great. It was a lot more positive.

Coming into the day I did not get the best of starts in the first race. I came through to twelfth. The race was a lot harder. I didn’t feel as comfortable as the track was getting rougher, but I think I had the fourth-best lap of the race. Again, there were positives. In the second race I got a good start, my best start of the season, and I think I was fifth. I dropped a couple of places. I think I was seventh and then I crashed. I just had no strength. I had no strength in my core, because I couldn’t use my core riding round.

I am just in a bit of a difficult situation. I did not ride coming in. I have done two days on this bike and I was not riding fast enough to even change anything. They said, “What do you want to change? What do you want to change?” I said, “I am six seconds a lap slower than where I should be. What is the point in changing something?” Yesterday was a surprise though. In the first race I was alright, then the weekend didn’t end well. A bit gutted about today but I honestly cannot really expect much more from the weekend.

You have not ridden a factory bike since 2015, which was obviously a KTM, but did you forget how much of a step up it is to get on one? Did you jump on this and be like, “Holy sh*t? This is what the other guys have got?”

No. Actually when I jumped on it the first day… It has been difficult. The first time I jumped on it I already had pain in my ribs. Then it was the second day where I went to strap up my boots and then my rib cracked. That was it, really. I just walked around to the team and said, “I cannot ride today.” They were all sort of stood there afterwards looking at me. I just felt a twat really. They said, “Why can’t you ride?” I said, “I think I broke my rib. I cannot breathe.” Since then I have not been able to ride it properly.

I was surprised in the race how much easier it does come on that bike. You can go fast on a normal bike in timed qualifying, that sort of thing, but over the duration of a race it does make your life a lot easier on a better bike. That is the main thing I found, particularly yesterday. There have been races where I have ridden up front for four, five or six laps and then I sort of make a couple mistakes and they start edging away where everything comes a little bit easier.

Before you know it, you are just riding with them. I set the second-best lap of the race on lap nine. Not without trying, but just by getting in my groove. That would have never happened before. Little bits. I think it is a lot of little things that make your life a little bit easier.

Across the two practice sessions yesterday, were you just like throwing the kitchen sink at the bike? Making massive changes one way, then the next way, and everything trying to get comfortable?

We made some changes with the suspension, yeah, just because the track was a lot rougher than what I have been riding or where we rode. I went riding on Wednesday at a flat track, because I just wanted to try and get a bit of confidence up again. We did change a little bit, but not massively. It was just a little bit with the front, because of the hills. We had it set quite low to turn tight, but we raised that a little bit and then I sort of rode with that set-up for the rest of the weekend.

What happened with the fence in the second one? Did you just overshoot the corner because you didn’t have the strength to stop?

Yeah. Just a stupid mistake, really. I don’t have the strength or the confidence to just lay it in to that corner. The next thing I knew I was over the berm and in the fence. Just a really stupid crash. Disappointing. I actually crashed again, which was even worse. I genuinely just looped out coming out the corner and landed on my hand. Both things, I just do not have the strength in my core. I just got an x-ray on my rib now and they are saying it is where it is for three weeks.

I have not set it back at all, so hopefully I can start moving forward. My goal is to be up there in Imola. That is three weeks from now. I should be able to start training a bit better now and hopefully have a good last four races since Lommel is going to be difficult for me. I have not had a chance to ride in the sand yet. That is just going to be a case of get through that weekend and then the last four is our goal.

There were two lines saw from you… In the corner behind pit lane after that little step-up, the long one, I could not see what you were doing because of the banners but you had a sick inside line where you squared off [Pauls] Jonass and [Arnaud] Tonus. I don’t know what you were doing there, but it looked pretty sick.

I guess it is just a part of the sport, but it is really frustrating at the minute. Like I said, aim for Imola. Get there and try and end the season positive for myself really. These guys, they are putting no pressure on. I am just a bonus really to ride for them. They have no riders. It is not like they have put all their eggs in one basket with me. I am just there to sort of show up, have the team in the paddock and ride. They have been really understanding with the whole thing from the start. There are no real expectations on me.

Another line: Coming up to pit lane you were literally the only MXGP rider who kept doing the step-up on the inside all day. You did not feel like changing at all?

No. I thought it was alright. I lost about six seconds setting up to do it.

The style in the air was nice. I feel like it was worth it.

It was just smooth. Honestly, I just was trying the smoothest lines. I didn’t want to hit the bumps. It was so jittery on the track out of every corner. I thought if that is one place I can rest and give my ribs a break, then I do not mind if I lose a couple seconds. Actually, the first race I set the best first section of the whole race on the last lap doing the step-up.

I did wonder how the hell you managed that on the last lap.

Yeah, I got the step-up.

Is it quite nice? There is a lot of love for you on social media at the moment. I have been talking to people about the Molson days and the under-21 championship. I feel like the world has come together to have a Tommy-appreciation weekend. That has got to be quite nice.

Yeah, that was nice to get a bit of love. Normally I just get hate.

I haven’t looked since you hit a fence, to be fair.

I doubt there will be as much today. You have the other people like, “You are useless.”

I don’t know if they got the loop-out on TV either. If they got that, we might have a problem.

I really hope they have not got that on there. It is a bit embarrassing. I expect I will get a bit of hate today. I cannot really expect much more. I am happy with yesterday. There were some positives, but I sort of knew I was not physically ready to be out there. It just is what it is. You have just got to push through.