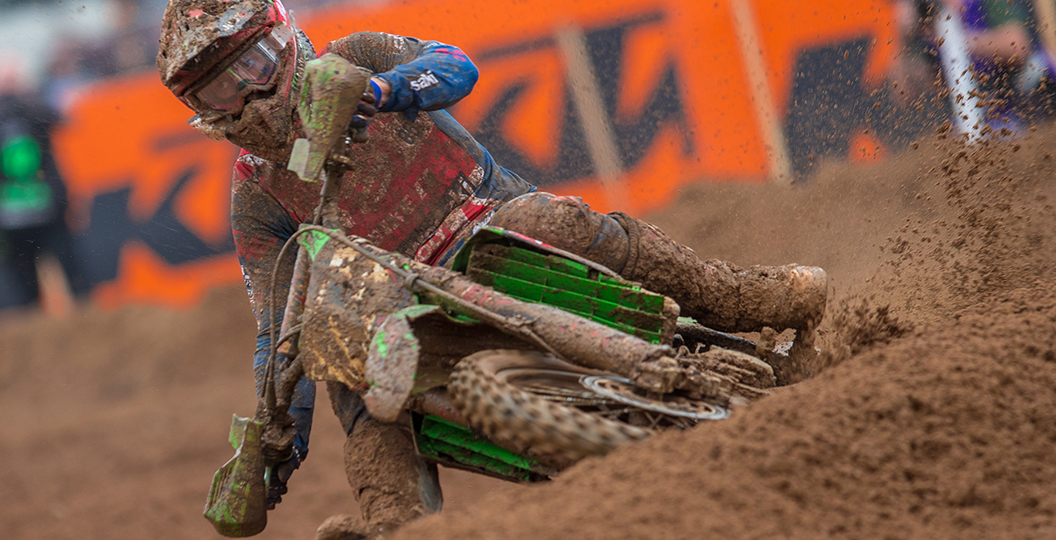 Tommy Searle was arguably one of the most impressive riders at the Motocross of Nations, although the results do not exactly reflect that. A mechanical failure in moto one left him crushed and desperate for redemption, which is something that he got with a stock bike in moto two. That is discussed in this exclusive MX Vice interview from RedBud.

MX Vice: It was a really good day from a riding point of view, and it should have looked that good in the results column, but obviously the first race kind of wrecked that for you. But apart from that, it was all positive.

Tommy Searle: Yeah, it’s been a positive weekend. I felt good from the get-go, from first practice. I was happy. I have been relaxed and rode well all weekend. Obviously it’s disappointing that we had a problem with the bike. I think a lot of other riders also had problems, a lot of mishaps. The whole race was so up and down with different riders, so that’s really disappointing because I felt like I rode really well. I’d done what I needed to do. I stayed out of trouble. I tried minding the bike to make sure it didn’t get hot. From my side, I thought I’d done everything but the bike got hot with the conditions. It’s one of those things. It’s just a real shame that it happened at this race.

The bike was obviously smoking from quite early on. Could you feel it going or was it kind of just an instant thing?

No, it was getting slower and slower and slower. I could feel it. Then I could see the water coming out. That’s why I sort of was trying to ride smoother throughout the race to save the bike. Then as I was actually riding smoother, I got a nice groove. I knew [Eli] Tomac was behind me. I felt really confident. It came quite easy to go that pace, but just really unfortunate that I wasn’t able to finish the race in that position.

I guess if you want to put a positive spin on it, the fact that you had to slow down, smooth out a bit, and still held fourth quite comfortably, that’s a bit of a statement.

Yeah, I have rode well but I can ride well. I don’t have any doubts about my riding. I think now out of this race I have got a long winter now and a new team and something I need to knuckle down with. It’s just one of those things. Over the years I have had a lot of injuries so I’ve had a lot of setbacks. I keep trying to come back. You’re up against it because you don’t have the results, you get less support. It spirals. I feel like I’ve done a good job this weekend and now I can have a good winter. But obviously really disappointed because I think with that fourth we would have got on the podium. Saying that, a lot of other people had bad races. It’s easy to say, “If, but…” That is the case, but a lot of other teams can also say that same thing.

Did you do anything different with the bike going into the last race or was it kind of just do the same thing and hope it makes it?

The last race we had a brand-new stock bike and we pulled the full standard engine out to put it in the bike. The second race I rode a completely stock engine with a pipe. That’s that. I was racing all the other guys with a bone-stock bike. That’s what we had. It actually felt good. The bike’s obviously good from a standard. It didn’t really feel that much difference to my race engine all season, to be honest. It is what it is. Moving on. Disappointed that I didn’t finish for the other riders, because Ben [Watson] rode his heart out that second race. Max [Anstie] again in the last race, he rode well. So hats off to Ben for his first ‘Nations and having such a good ride.

Obviously this is the first time you’ve ridden here in eight or nine years. Was it as good as you remembered? Did you enjoy it?

I really enjoyed the track all weekend. I liked the conditions. I liked it from first practice, but obviously it’s not the same as when I was raced here before. It was nice and dry, more fun. I think if it had been dry it would have been such a nice weekend and such a fun track to ride. But it was what it was. I enjoyed it nonetheless. Obviously disappointed that I didn’t help get Team GB on the podium.

Finally, what’s next for you? I guess you are going to do Lyng, but I know Bobby is testing with BOS on the Kawasaki this week or next. Are you going to get straight into that?

Yeah, I want to start moving forward for next year already. Try the suspension. I think we can make massive improvements. Just while I’m still race fit and feeling well I’ll get a bit of testing in so that when we test later on, we have a solid base to start from rather than being a bit lost that first test and get things moving. But I’ll race Lyng. I always like racing Lyng. We’ll see what happens there. Hopefully I can get a couple of wins and end the season on a positive note.