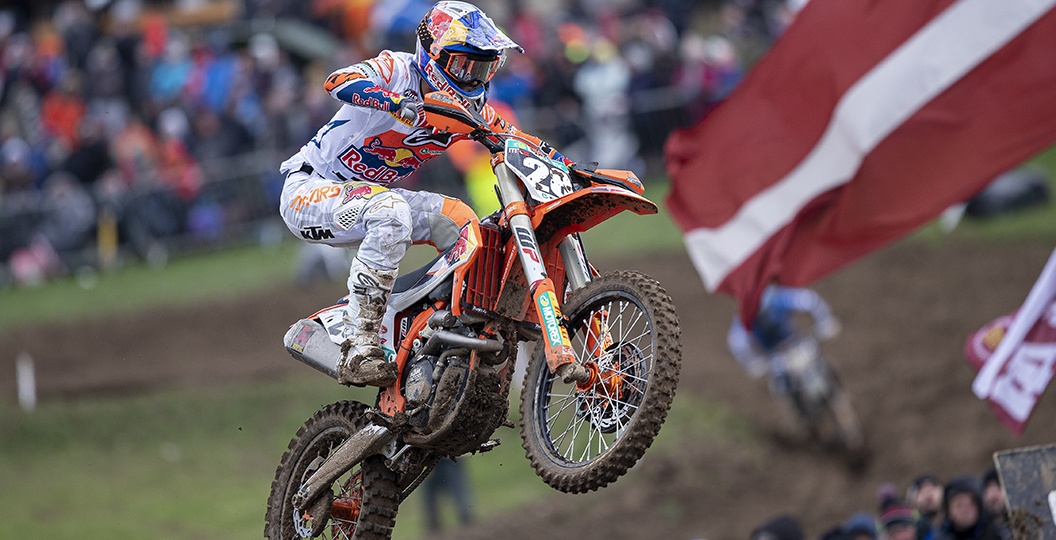 For the first time since Valkenswaard in March, Tom Vialle rolled up to a starting line on Sunday. The opening round of the Czech national series was tackled by the current series leader in the 2020 FIM Motocross World Championship. Coverage of the race was limited, unsurprisingly, so MX Vice editor Lewis Phillips called Vialle up to get the lowdown on everything that went on and how the race was run.

MX Vice: You raced in the Czech Republic on Sunday, but obviously no one could watch that or find out too much about it. Talk us through your two motos.

Tom Vialle: Yeah, it had been a long time. I do not know exactly, but it was like three or four months since Valkenswaard. It was quite a long time without racing, almost like a winter. It was really nice to race again. We did not actually know whether we were going to go and do this race, to begin with, because we still do not know when MXGP will start. It was difficult to make the decision, but we saw that the track was really nice and a little bit like an MXGP track.

It was a good opportunity. There were also some good riders, like Jago [Geerts] and Rene [Hofer], so it was almost like an MXGP round. I really enjoyed the track and my bike, because I rode with my race bike. It had been three or four months since I last rode that bike – it was nice to be back on it again.

It was only a small national championship race, but did it feel quite weird with all of the COVID-19 restrictions? Did it just feel like a normal race once you got there?

Well, the result was not that important. It was obviously not an MXGP round. I still like to be at the races, no matter where it is, and completely focussed on riding good. That is important for me. The track was nice, with good lines and everything that you need for good training. If you have a small crash or something then it is not important, like it would be at a GP. It was just a nice race.

I could only see bits of the track on Instagram, but it looked like Loket – hard-pack dirt with a bit of elevation.

You have been riding for a while now, so did you feel rusty at all once the gates dropped? It was not an MXGP round, like you said, but there was good competition.

Yeah, Jago was there and we are fighting in the world championship. It was important to ride quite good. I think it was good for both of us to see where we both are, after three or four months without racing. The start was actually on the dirt, not on the grate. I have never actually started on the dirt with the factory bike – I have never even tried it. It does not matter, because even the pre-season races like Hawkstone or LaCapelle have the metal grate now. We never train on dirt starts. It was a bit special, but I started first in the first race and second in the second race. I passed first in the second corner though, so it was not too bad.

I know there are a few more Czech races coming up. Have you got any plans to do those? The French series starts in August as well, so do you have more races planned before the season starts up?

Yeah, we are staying in Czechia this week and will ride the second race at Chapels. We will ride there, and the track is nice so it is good. After that I will go to France, just to take one or two weeks of holiday, and then we wait. We still do not know when there will be an MXGP round. We are hoping that there will be some races in August, but otherwise it will September and quite late. It all depends on the calendar and when the season restarts. It just depends.

Am I right in thinking that you stayed in Belgium through lockdown, rather than going back to France?

Joel is a big part of your racing, huh? I get the impression that he is right behind you at all times and you lean on him for help.

You have been practicing in the last month or two, so is there anything specific that you have tried to improve on?

We stopped for two months to begin with, but kept going with our physical training. We took a month to ride a bit after that – we just tried to get back to riding the bike quite fast and smooth. It was a little bit difficult to find the rhythm again, but we are back to a normal training programme now and it is going pretty well. It got a bit boring to train… Not for nothing, but we do not know when we are going to race again. It is a difficult time for everyone, because no one knows anything.

You will have the red plate for the first time in your career when MXGP starts up again, and after last year I think everyone expected this. Did you believe you could get to this level so quickly when you first started with Red Bull KTM though?

It is good [laughs]! When I first started in Argentina a year ago, the objective was to finish the championship in the top twelve or maybe top ten. Finishing in the top ten would have been really good and maybe getting in the top five sometimes. It went really fast though, because I did a podium at the second round and then at the fourth one in Italy. It really started going fast and now, one year after, I have the red plate. It is a completely different life – I did not expect this.