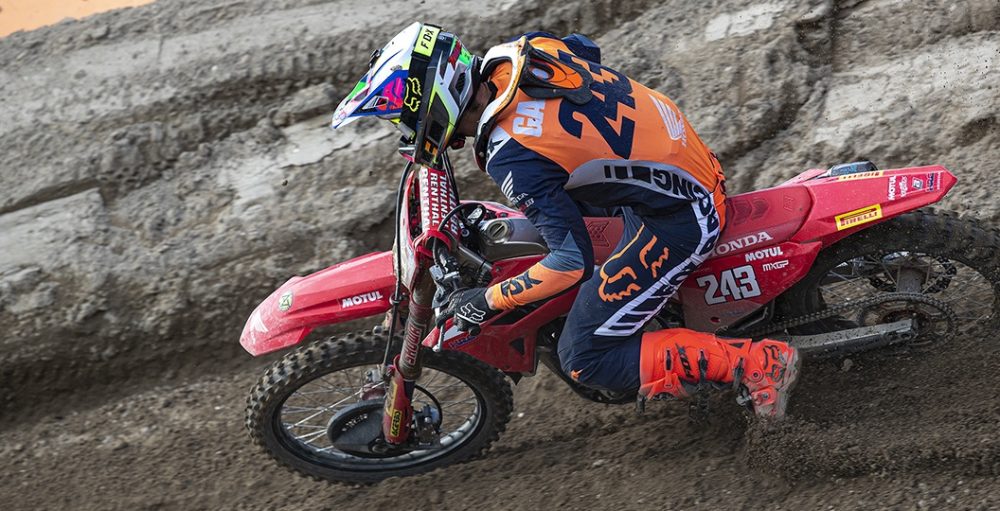 Tim Gajser finally got the monkey off his back and clinched an overall victory in the 2020 FIM Motocross World Championship, as a 1-2 scorecard gave him the win at the Grand Prix of Europe. Gajser discusses that triumph, his battle with Dylan Walsh, improving his starts and more in this exclusive MX Vice interview. It’s worth noting that Team HRC announced that Gajser has signed a multi-year contract hours after this interview was conducted.

MX Vice: Your first overall win of the season! Kind of a long time coming. Who would have thought you would have to wait until October? Nice to get that one under the belt. Really, it was quite a dominant day.

Tim Gajser: Yeah, exactly. I’m super happy for myself and the team to finally get the first overall of the year. We won many heat races, but not an overall yet. I’m glad. The day was good. Two consistent motos. It is just a shame about the little mistake that I made in the second race. When I was leading I lost the first place, and then tried to regroup as soon as possible. It was not easy, because the pace was quite high. I managed and stalked Tony [Cairoli]. I was behind him, following him and then in the end I found some nice lines where I could really catch him in the first sector. It was not easy to make a pass and I didn’t want to risk it, so I settled for second and first overall.

I guess that’s the thing. Maybe you could have caught Tony in the second race and gotten right on his back wheel, but where were you going to pass? We have had three rounds here and no one has really been able to make any passes.

How was it being sat behind Dylan [Walsh] in that first race? Obviously, he bunched everyone up pretty good. I think you back to thirteenth behind him, all in a nice little queue. I heard screams from you. I did hear some screams [laughs].

I was faster than him, but it was difficult to pass. He was just using inside lines. After ten minutes I get frustrated. I did not want to take risks, because I could park him somewhere. It was a risk that I would crash as well. He did a good ten minutes and after that I think everybody passed him. He’s also here to make a good result. Nothing to say about that.

You got quite close in the second turn one lap, didn’t you? I thought you had the pass made and then he wasn’t braking [laughs].

He did not back off! He just pushed me wide. That’s how it was.

How does the Mantova triple header compare to Kegums and Faenza? Did you get bored of this track? Was it better or more enjoyable? How does this compare?

It was quite the same. Three races at the same track. It’s getting boring, but it is what it is. Same for everyone. Just a shame that they did not change the layout, because they were planning to change for the third day of racing. I think they were afraid of the rain, as the forecast for the weekend wasn’t the best. Same track and same jumps. It was kind of boring, but anyway it was the same for everyone. It was okay.

We have talked about your starts a few times lately. I feel like they are getting better. The jump was not great in the first moto, but you still came out top three I think. Then obviously the second moto was great. I guess you have made improvements there.

Yeah, exactly. We were working a lot during these days that we had between the races. Yeah, I improved a little bit. I got that feeling back. It’s paying off immediately.

Obviously, the series lead extended today. All good at the moment, huh? No worries. Happy with where you are at?

Yeah. Red plate is in our hands, so I’m super happy. There are still many races to go, so I’m just trying to focus   on each GP. Try to be consistent. Try to be in front all the time and enjoy as much as possible. That makes you faster when you enjoy it.