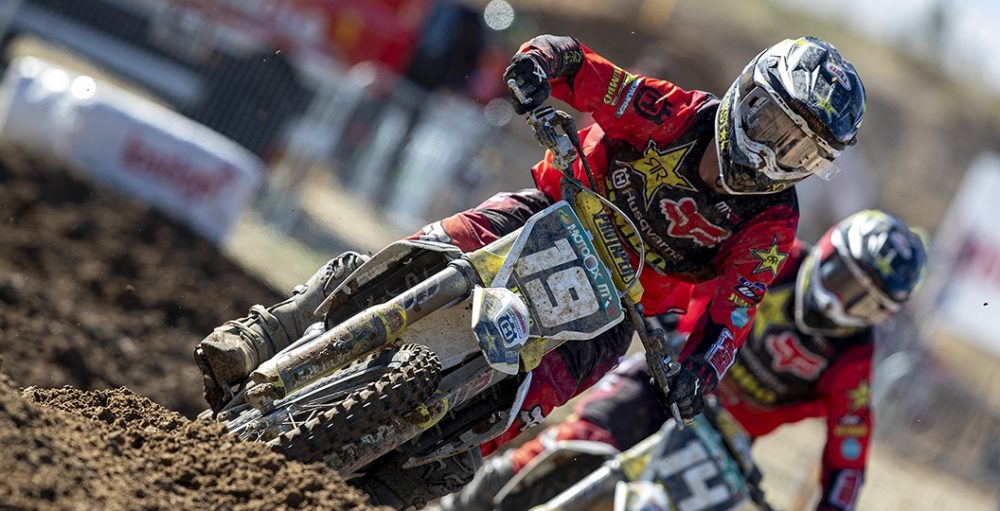 Thomas Olsen has picked up a fair bit of steam in recent weeks and proven to everyone what a formidable force he would have been, had he entered the season healthy. The Rockstar Energy Husqvarna Factory Racing star picked up his fourth podium finish in succession on Sunday and, hey, it could have easily been another win. That was discussed in this exclusive MX Vice post-race interview, as well as the fact that he has already starting testing on the 450F.

MX Vice: Third overall on the day. Decent Grand Prix. I feel like you had the speed to win, but starts killed you. I guess that’s the problem everyone who is bigger, like you, runs into in the MX2 class. The speed was good though.

Thomas Olsen: Yeah, exactly. Starts are killing me pretty much. I feel like the drop is not too bad. This time I was next to [Tom] Vialle, so he pretty much gets every holeshot and he cut me off a bit. That first moto I felt so good. I was just riding calm and easy. After the moto, it was not even tough on me. I thought the second moto was for sure going to be my moto. I knew how important the start was, but I was banging bars with so many guys off the start. Jed [Beaton] even went down. The track changed quite a bit from the first moto to second moto, in my opinion, and it was wet and slippery.

I was not really comfortable on that, to be honest. I was just making too many mistakes. [Ben] Watson gapped me a bit and I was fighting all moto to just get back on his rear wheel. I felt like the first moto I was riding and in that second moto I was just fighting for my life. It’s funny how that ends up. Second in the first one and then seventh in the second one. Let’s say that overall I’m happy, because we can leave here and take the positives to make more progress. With a start to the season like I had, then it’s also important for me to build and go away from every weekend healthy.

This is the thing, actually. You had a disaster start to the season. You could actually get third in the points, which that would be a nice reward after a horrible start.

Yeah, it would. That’s also why I’m a bit disappointed with that second one, because I could have picked up some good points. We just keep going for it and practicing hard. That would be a nice bonus for myself and stuff like that. It’s nice to have a goal, like something to chase again. It’s a bit difficult when you come in with the goal to win the world championship and then that pretty much gets thrown out the window. It’s nice to have something to be motivated for. Other than that, I can pretty much be motivated for each moto. It’s not a big problem, but I’m really going for that third place.

I guess the frustration that comes with getting out of the gate with [Tom] Vialle, who is half your size or maybe even smaller than that, is part of the reason why you are quite excited about a move up to MXGP, where it will be more equal?

I hope so, too. I think also just being on the 250 for this long, it’s going to be nice with the change and to have most of the things new. New challenges and stuff like that. I’m looking forward to that. I have been testing the 450F a little bit, a while ago. Those were some fun days.

How did you feel on the 450F then? I didn’t know you had been testing it. How has that gone? First signs are positive, I guess?

Yeah. I think the bike suits me quite well. I’ve always been a guy that rides quite low RPM, so I obviously adjusted to the 250 factory bike. It’s going to be a new way of riding I think and I’m ready for that.

All-new track here. When people hear man-made track, they think of Indonesia and Qatar. This was better than that though, wasn’t it? We have got elevation and some technical spots. It is jumpy, but not too jumpy. You had four or five straights there where it was just flat. I feel like this is a good man-made track.

Yeah, I feel so too. Even Imola has also been good, but I think this track is even better.

I can’t agree with Imola being good. No, you are on your own there.

I’m on with this track, that it’s better. It’s better for sure. I think the ground was awesome. Such a fun track. When we are racing, we really get caught up in that. Let’s say to come here and practice, with how the track was this morning, I think that would be really fun. Could throw a lot of whips [laughs].