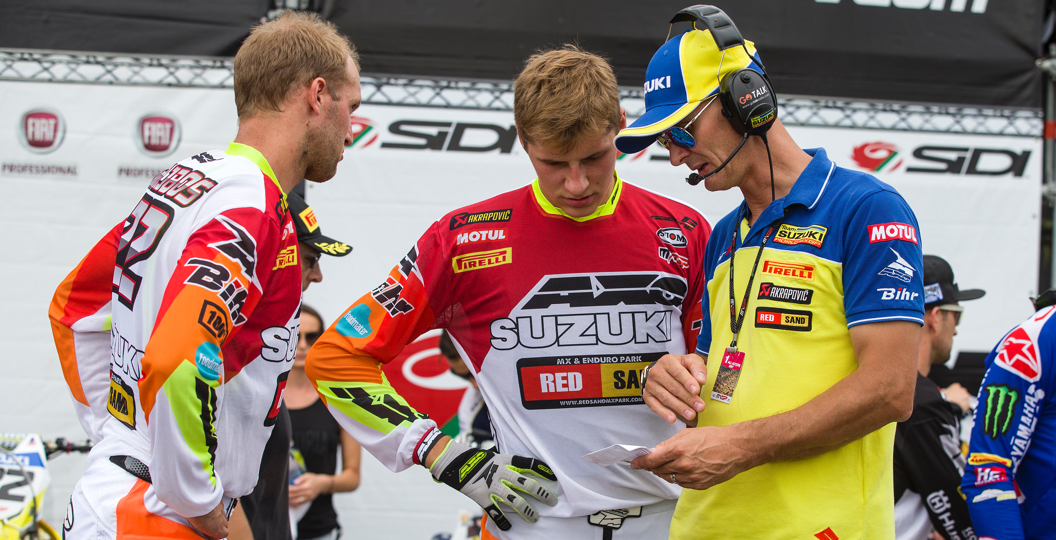 Following the announcement that Suzuki have opted to stop running a team in the FIM Motocross World Championship, most have been eager to hear how Stefan Everts feels about the situation. Everts took control of the Suzuki outfit at the start of last year and, since then, has elevated the programme into one of the most professional within the paddock.

MX Vice: Obviously the news dropped on Monday that Suzuki have pulled out of MXGP. When did you find out and what was your initial reaction?

Stefan Everts: We were informed a couple of weeks before. We already knew the news from MX2. We knew a few weeks before, so informed our people inside of GRP and the riders. It is shocking news for everybody; the whole group here at GRP and us personally. It is a tough call and decision for us. We have to accept this and respect the decision of Suzuki, as that is the way that it is. I am thankful for the chance to run the team, although it only lasted two years, as it was a great experience. I was happy to go through it.

When you were first told about the MX2 team, did they tell you that MXGP would definitely be running as normal? Did they hint that MXGP would potentially be pulled as well?

No, we just got the news that MX2 would stop and no other news. We were not informed that MXGP might stop. I mean, it is a yes or a no. There is no in between with the information that we get.

I guess there was no opportunity for you to convince them to stay around, because of that, by working with less riders or sticking to a smaller budget? Their decision was the final answer, right?

We had the possibility to continue as a private team, but eventually it was tough to get the budget together and I had to say no. We tried for some weeks, but I knew from the beginning that it would be very difficult to find that kind of budget to run a full MXGP season. I knew it would be tough with twenty rounds, plus bonuses and salaries for the riders. We gave it a chance and I was hoping that something would fall out of the sky to allow us to continue with the crew that we have here and the riders. In the end, we did not have the budget and I did not want to put my private money inside of the team.

Obviously we know that you have not had the greatest budget to work with over the last two years, but did you ever go over that? Were Suzuki calling you to find ways to spend less money over that time?

No, we had our budget and we worked with that. We did not go over the budget at all over the last two years. We tried to stay within the lines even more than possible, but it was tough to do a good job with that budget. We managed to do that in the best way and had some good results, in MX2 more than MXGP, but again we managed. It was definitely not us running over budget that influenced this decision that they have now made.

I know a few people were concerned that you had lost some of your personal money through this, but I guess that means that you never had to go that far and sink your own money into the team?

That is something that I don’t like to discuss. With GRP I think that, at the end of the day, we will be fine. There are many assets, tool and vehicles there. We will manage.

The statement that Suzuki released on Monday was really short. They did not go into depth at all really, so did you get told more than that? Did they miss out a crucial piece of information?

Do you get the impression that this is going to be just a short break or do you think they are gone for good? Obviously Yamaha pulled their factory effort in America, but now they are back.

I don’t know. I have no clue about this. It all depends on how bike sales and things will go in the future. I know that in the past they stopped for five years, but at the moment I do not know.

One thing that really stood out about the unit you created was there were so many tight relationships within the team. Arminas [Jasikonis], Hunter [Lawrence] and Jeremy [Seewer] all got along great. Even Liam [Everts] was involved with them! How tough was it to break the news?

For everyone it was a big shock. It was not the best news to give to anybody. I think that moment is something I will never forget in my life. There are some crew members here at GRP who have been here for more than ten years! It was not a good moment for us. For Arminas and Jeremy it was a big shock, but Hunter already knew that news some weeks before. Everyone takes it differently, but at the end of the day it is a big change for everybody. You have to regroup, see what the future will bring and what direction you will go. It is also the same for us.

At the ‘Nations, there was talk of you even working with a different manufacturer next year. Maybe setting up a small Husqvarna team with Jeremy or something along those lines. Did you even come close to that? Is there still a chance of you doing something else? It sounded as though Jeremy really wanted to stay with you, rather than go to America with JGR or something.

Yeah, it was also like that with Jeremy. His first option was that we could run a private team and continue like this. He was very happy here the past two years. He would have liked to continue, but we set a date on that. We reached that date and then we had to make a decision. It was a nice group, so it is a pity to see it go that way. I think in some ways we showed good things and good results. That is the way it is now, so we have no choice but to accept it.

I have no plans to go with any other team or manufacturer at this moment. Mainly I want to take some time off, think about what happened and where to go. This year for me will be a year of taking it easy a little more. I will try to finish off everything in the correct way with Suzuki and also the people who are still here for the next few weeks and months. We will then see what the future brings. I’ll have some more time for Liam and be able to go with him to the races, some more time for the family and that is what I am going to do. I need to some time to regroup and, to be honest, my motivation at this moment is very, very low.

The RMZ-450 was all-new this year. Now, after a season of working on it and developing it, what do you think of it? I noticed that it is not faring too well in bike shootouts.

I think we had a great bike this year. We only had a chance to really show that a few times. There were some nice starts for AJ and that podium in Portugal. I think there is some good potential with the bike. It is a new, fresh-looking bike. I was really pleased. We had to continue to work to make it better and that takes a lot of time, but I was very happy with that. After taking over the Suzuki team, it was nice to start off with new material. It was a really good step and direction for everybody.

Have any of your riders from this year approached you about working with them as a trainer or manager? Even if you do not go to the races, have you been asked for some advice? Would that be something that you are interested in doing in the future?

I don’t know yet. I just want to take some time, like I said, see what comes towards me and what I want to do. Next year I want to be busy with Liam, more than what I have been, then we will see what the future brings. I want to have some time off. Like I said, motivation is low at this time. I need time to deal with the feelings and then move on.

To sum up, what do you think of the way that MXGP is developing? Next year we will have two rounds in Indonesia and one in Turkey, then the year after it is off to China. Do you feel like that contributed to Suzuki’s decision?

I don’t know, but I don’t think so. I think they made their decision on other reasons. I do not think it has anything to do with where we are going over the next few years. It is important that we go where there is a bike market for it – that is very important for every manufacturer. Qatar, for example, there was no bike market. When we went to Indonesia this year, I saw good things. There is a big bike market there with scooters, so I think it is good. It is good to go to these countries with people who are motivated to come to the race. This is an important thing for manufacturers. I hope that where they want to go in the future is where the markets are.

Finally, just talk about how Liam is progressing. Obviously he is over in New Zealand at the moment, but what do you think the next few years will look like for him? When is he going to move up to EMX125?

Liam is doing well! He has been there for a month now and will stay until Christmas. He said the tracks are awesome, so it is good. They are technical. He likes to work with Ben, has made some new friends and is doing the local races there. He is working really hard with his studies, because that is important for us. That is the priority, then it is his riding. Everything is going good. With Ben, we talk and he sends me movies. We can see what is happening and what he is doing. It is also nice that someone else can work with him. Everyone sees something and some of the feedback that Ben has given has been very positive. Just to give him that experience is something great.

Where will he be in the future? Next year he will ride a KTM 85. We will focus on the Dutch Championship, then hopefully we can do a lot of the ADAC. Then, if everything goes well, we may go to the world championship. He has to earn that from our side. After that, it depends how he will grow. At the moment he is still quite small for his age, so we have to see how he will be.