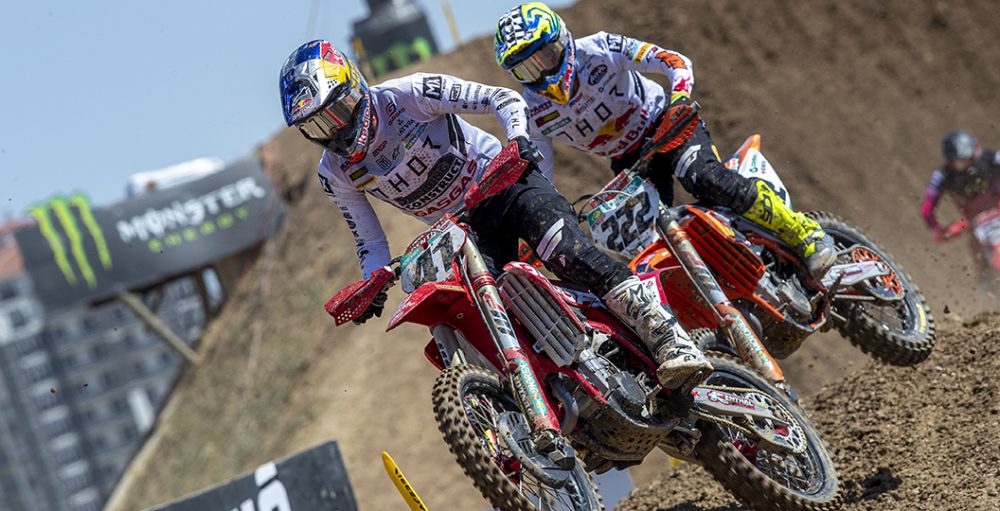 Standing Construct GASGAS Factory Racing’s Pauls Jonass has been a revelation in the 2021 FIM Motocross World Championship, but everything that he had done at the first seven rounds pales in comparison to the way that he rode at the Grand Prix of Turkey. Jonass was undoubtedly the fastest guy on track at Afyonkarahisar and that has not been the case since he moved onto the 450F.

Jonass discusses his speed, crash onto the concrete and future in this exclusive MX Vice interview from Turkey. Jonass will be back with the Standing Construct GASGAS effort in 2022, despite some reshuffling in the Austrian organisation. The fact that he has made it his mission to stay with Tim Mathys’ effort is a testament to the way in which the Standing Construct squad is run.

MX Vice: Look, we need to go back to Sunday first of all.

Pauls Jonass: Yeah, that was obviously the best MXGP race ever for me. That is 100%. I did not expect to be that fast. I knew that I could ride good, but I actually broke one rib in Latvia. I did not even know! I went riding after Latvia on Tuesday or Wednesday and it was alright. I woke up on Thursday morning and was like, “Oh, that is a lot of pain.” I wanted to go cycling and could not cycle. I went to do an x-ray; they checked the x-ray and nothing was broken.

I said, “Okay then. I will go riding on Friday.” Friday was good and then I went riding on Saturday. I just wanted to take the tape to tape my fingers. I turned backwards and like, “Woah! What is going on now?” I said to my mechanic, “Okay. Now we will got Belgium and take some days off.” I went to check and it was just a broken rib. I had to take two weeks off the bike, but I did a lot of physical training and I think that showed on Sunday.

Maybe not today, because I did not flow with the track. Like you said, the first moto on Sunday was really good. Maybe not the first laps, as I struggled a little bit and made some bad choices with the lines in the first laps, but once I got in a flow I caught everyone in front and finished just behind Jorge [Prado], which was good. The speed was also good in the second moto until I did a superman and some tricks for the fans.

We need to actually talk about that as well. What happened? I did not see it. I just saw that you had destroyed an Alpinestars banner, but it looked like you got missed your brake and got whiskey throttle at the same time.

I actually did not miss my brake. I just got a kicker from the rear. It was not actually that bad, but I lost the front at the same time. I lost my balance a little bit and said, “Okay. I will not make the corner anymore.” I did not want to brake too hard and go over the bars, so I gave it a little bit throttle to land a little safer. Once I hit the banners I saw there was a metal fence in front, so I let the bike go and landed on the concrete.

It was quite painful. I feel better than expected today. My heel was hurting a bit, and then my ass and elbow were scratched. That was no problem at all though. I went to the medical centre every single day and they treated me well. It was better than expected, but it was still a bit painful to ride with the heel today. When I touched the insides of the corners on the left side, then it was a bit painful. It was good for the rest.

It did not impact you too much today?

No, when riding it did not hurt. I got arm pump in the first moto, which was unfortunate, and then in the second moto I did not get a flow. It was all up to me, you know? There was nothing wrong with the bike or anything. I just did not find the confidence with the track today. It was harder than Sunday and slicker too. Normally I like those slick conditions, but I did not get a flow with the hard ruts today.

There is a big sign up there that says this is the best motocross track in the world and a few guys have joked that you put it there, because this place has been good to you. You had a podium with Husqvarna and then you were balls fast on Sunday. Do you actually like this place?

No, I actually like this place. I would not say it is the best motocross track in the world, but I would say that it has the best facilites. It is so nice. The hotel is just here – you walk to the track in the morning and can sleep longer. Everywhere is concrete and the fences are proper fences. In front of the start gate, there are the stones and it is just so nice. You always have dirty shoes when you come to motocross, but if you do not go on the track then you can come with proper shoes. I see your white shoes are still clean! It is good in that way, you know? They could make some changes to the track, which would be good. It is tough though, because the track is hard. It is quite one-lined. They watered it way more on Sunday than this morning, so there were deeper lines. The track was faster today and really, really hard-pack.

From what I hear, next year is going to be exactly the same. Nothing is going to change from now. Same team, same engine, same bike and everything.

About that… We are still not 100% sure. We are still going to see. We will see. No one knows exactly what is going to happen, but I am 100% sure that we are going to have one of the best bikes out there.