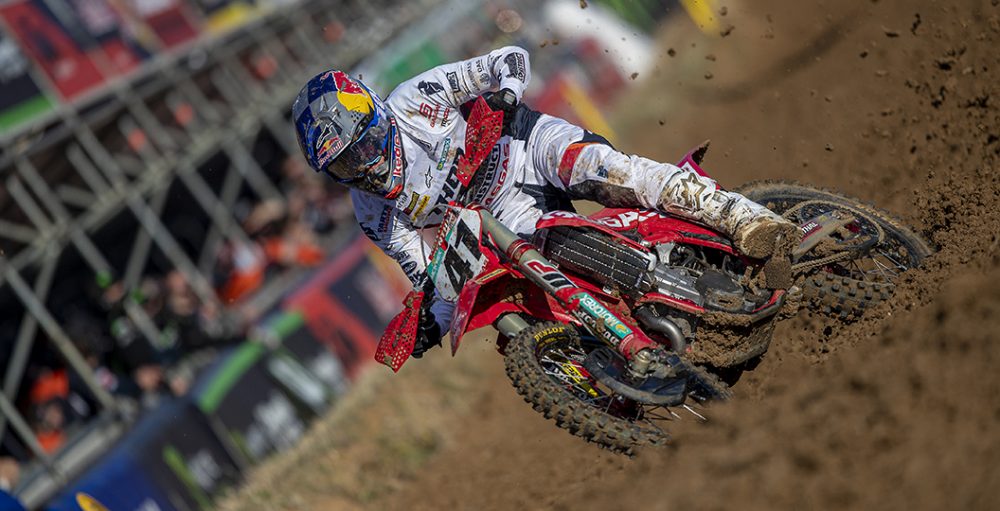 Pauls Jonass has been one of the most impressive riders in the 2021 FIM Motocross World Championship. It is almost like everyone forgot what he is capable of, seeing as he missed so much time last year. Jonass has been sixth overall at four of the 13 rounds that have been run so far this term, but his speed has been more impressive than that. The recent Grand Prix of Spain was a great example of that – he had the second-fastest lap time in the final moto.

Jonass dissects that and explains why he has only had a single podium so far this year in the MX Vice interview from Intu Xanadu below. It is another insightful chat with the man who is committed to Standing Construct for the 2022 FIM Motocross World Championship. It remains to be seen if the squad will remain on GASGAS machinery, but Jonass and Bogers are set to return. Standing Construct continues to be an atmosphere that riders feel they can thrive in.

MX Vice: Another very good day for you, probably better than those results show. You went with Jeffrey [Herlings] in the first moto, after he passed you, and I do not think that anyone noticed. Again, a positive day. I just do not know why this is not leading to more podiums.

Pauls Jonass: I was already laughing and saying that I am ‘Mr. Sixth’ this year. It does not matter what the moto scores are, I will be sixth overall. It’s another sixth place but the riding was pretty okay. When Jeffrey passed me, I tried to stick with him for as long as I could. He made some passes quicker and I just stayed there. The riding was okay in the second moto too. I got a really good start and was riding in third or fourth. I made one small mistake, so Brian [Bogers] and Tony [Cairoli] passed me. That was a pity. I felt really good and the mechanic said that I had the second-best time in the second moto. The speed is there! I am just missing podiums, like you said.

I just think that I need to take a little bit of extra risk. I already told the team in France that I am a little bit too cautious and careful. I am not riding at 100% – maybe 98%. That is the difference. When you see the front guys, they are not so far ahead. They are still just that little bit extra. The starts are good, but I am always like fourth or fifth. Maybe if I get a holeshot then it is going to be a little bit of a different story? There are some things to work on, but I am pretty happy with how this season has gone. The results are good and the speed is good. Let’s not forget that I almost skipped the whole of last year! I took a long time off, so I still think that I am getting in the rhythm and starting to feel like I belong with the front guys. It took a while, but I think that I am there now. I just need to put all of the pieces together.

It is a weird one, because you missed all of last year and then the year before was so-so with your knee injury. In a way… It is a bit of a stretch, but this is like your first rookie season that is a solid go of it.

That is true. There was not so much riding in my rookie season or last season. There was a lot of riding, but not so much racing! This is my first full year without any big injuries. There have been small injuries and painkillers here and there, but that is for everyone. It is just a part of racing. I just need to get going, because it is good when you are with the front guys. You get the confidence and can get going faster.

I guess that is why you are riding at 98% as well. Okay, the results are very important. Getting through the season healthy is just as important to you as well.

I was talking with the team boss, Tim, last week and I said, “I feel like I am riding at 98% and need to take some risks.” He said that if I take extra risks then maybe I will finish tenth instead of fifth. I said, “Yeah, but if it pays off then maybe we are on the podium!” I know that I can be better, so it is frustrating when I am riding. It is like something is holding me back and I could be going faster. Like you said, maybe I am a little bit too careful with the injuries from the past. I just need to take more time and keep going. I think that when I feel that I am ready to go, I will be battling for podiums every weekend.

Tell me about the second-moto incident with Jeffrey. I just spoke to him and I did not see it, but I did hear everyone scream. That is never a good sign. I saw it on television and oh my god. I am glad you are alive and I am glad he is alive.

Jeffrey was already in mid-air watching me. He was like, “No, not again!”

He said about Argentina in the MX2 days and how he had a flashback to that.

You missed this round last year, so this was your first time here. What did you think? A good Grand Prix?

With the spectators and everyone around, it was quite crazy. It was impressive. I think that this is the biggest crowd this year. It was really cool. The track was not too bad either. Maybe they ripped too deep in some places – the lines were a bit too deep – but at least we had some passes unlike LaCapelle. It was a better racetrack.

Last thing. You missed all of last year, like we said. This is a heavy calendar with a lot of races in a row. Are you starting to feel it or doing okay?

Actually, what I am starting to feel is that I have been riding and training for a really long time already. I started riding in November, when all of the guys stopped the season. I just started riding then and I have been flat out since then. They said the calendar will start in March, so I was getting ready for that. It came that time and then it got postponed by two months. I have been quite flat out since November or even before that with the physical training. I am starting to feel a little bit mentally tired more than physically. I just try to do less riding during the week to increase the productivity, instead of having more time on the bike.

I should ask this as well. When we last talked about your deal, you said that there were some things to be sorted out. I believe those are sorted now, so happy about the direction that things are going?

Yeah! I am really happy. I am happy to stay with the team. Everyone is so great here. The bike is good and the people are good. Everyone! I just did not want to change anything. I want to stay with those guys for as long as possible and bring some good results for them.