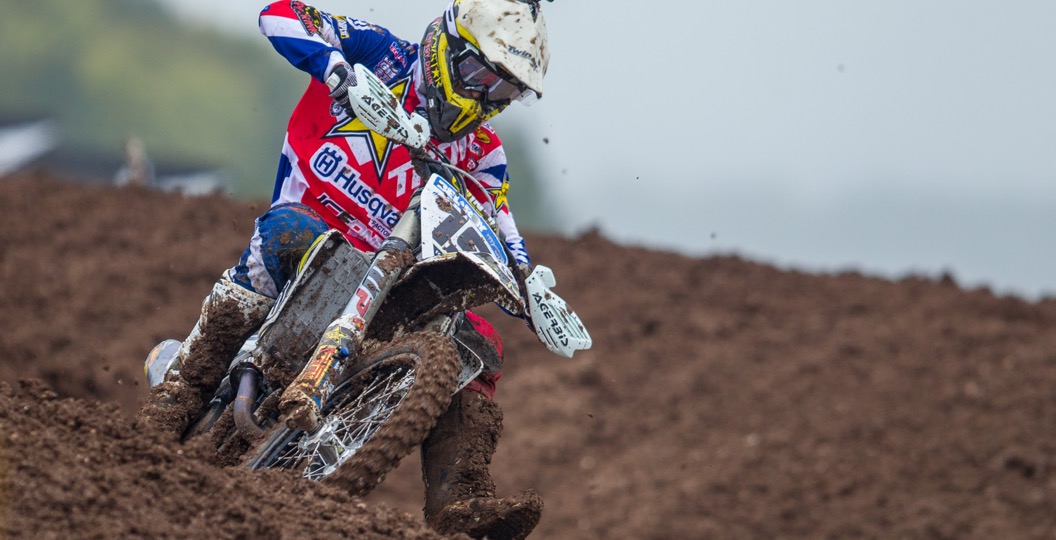 Following an incredible display at the Motocross of Nations, does Max Anstie really need an introduction? The Rockstar Energy Husqvarna Factory Racing rider decimated the conversation whilst en route to a pair of moto wins and lifted Great Britain onto the podium for the first time in twenty years. Anstie put himself into the record books on Sunday.

Max Anstie: It is unbelievable. I don’t even think it has sunk in yet. That was just one hell of a day. I woke up this morning and I did not… I was focused. I suppose I did not give myself time to think about anything. I was telling myself for the last few weeks, it is just GP number twenty. I’m going there to do my work and ride as fast as I can. It is my home GP, great, but I’m training and preparing like normal. When I was riding, I was trying to just think about that. Think about hitting my marks, hitting my turns, doing my bits that I know I could do and not get too carried away with it.

In the first race the crowd was just absolutely unreal. I had a bit of a gap and I got a bit nervous the last few laps. Then in the second race, I was about midway through and I had a little gap on Febvre and then I heard the commentator say, “It is all eyes on Anstie. If Team GB get on the podium…” I was like, oh! Then I went and ended up pulling the front brake in a bit too much and slid out. I got up and I felt all right and I said, “I’m having this.” I managed to catch Febvre and pass him. Obviously then Jeffrey was right there close. It was a mega race. It was awesome to do and something I’ll never forget. Just an amazing feeling.

Obviously you have been around a while now, but it is weird. I feel like today after those rides, you have arrived now. I feel like you are now in the hall of fame and an all-timer. Do you feel like you have done something that is going to go down in history?

It is unreal. I was here in 2006 and I watched. I stood on that turn where Stefan Everts went around the outside of James Stewart. I watched Antonio Cairoli beat Ryan Villopoto. I just remember thinking there, “wow, these boys are amazing. They’re like my heroes. I’m never going to be like them.” Now eleven years later, I’ve gone and went 1-1 at the same track and same event. That is bloody cool.

Did the fans help you? The commentators were constantly going on about how you could not do it without the fans. They were urging you on. Did that actually kind of spur you on and give you that extra bit of drive you needed?

Like I said, I was just trying to focus on myself and my lines. Actually, it made me a bit more nervous. It was the first time in a while, actually on Saturday even in free practice I felt nervous. I was like, “oh, this is quite cool.” You have got a bit of the weight from the whole nation and the whole team. There are three riders and if you mess it up… I was a bit nervous the last few laps in both races. I’m just so glad I was able to get it done. It was just unbelievable.

The fans were great, because they were getting the lappers out of the way as well. The blue flags were good but the lappers. We don’t race some of these guys in GPs, so they are not too clued up on getting out of the way. So, the fans, it just sounded like it was so loud. People were just like, “okay, something must be going on.” Let me get out of the way. It was good. It was helping me. The last few laps we started lapping some relatively good guys. Then they were still kind of holding their positions. It was getting tight, because Jeffrey was there. It was good that we were able to do it.

Can the crowd sometimes hurt in spots when a guy like [Jeffrey] Herlings is right behind you? They kind of drown out the sound of his bike so you cannot really hear what side he is coming from? Sometimes maybe they get louder and you are like, “wait, why are you doing that? Is there someone like right there?”

Yeah. I got in front of Febvre then started pulling away a bit and the crowd, I just thought… I had to look back over the finish because I was like, “is he right on me trying to go down the inside of me?” Then I was like, “oh, no, actually I’ve got a few seconds.” I was like, okay, I can go outside of the bottom. Down the end of the old pit lane after the finish jump, if you went outside it was better for the next straight, but obviously you were going to get T-boned if you left the door open. I was like, “I don’t know, I don’t know!” But then I looked back and I was like, “oh, I’ve got a bit of space now.”

It is hard to hear with those fans, but could not do it without them there. They are unbelievable. It is just so nice to be able to do this for everyone and put on a show. It was not exactly the nicest day out. I know people travelled from all over the country. It was just something for us as a team, as a country we proved that we are there. We can be on the box and as a country we’re right up there. We might be a small country, but it is cool. It’s great.

You came in from the first race after having won and were stoked, pumped and all of that. When you found out that Tommy did not finish and GB were only ninth, were you like, “wait, so I did all of that and it is only good enough for that?”

I know. Again, in the first race, there was one time where I could really hear the commentator every lap. I was kind of going around. It was like four or five seconds and I could hear what they were saying. I heard him say Searle this, Searle that or something. I was like, “oh, great! He’s probably like fifth or something, mega! We are having a great time. I’m out front. Tommy must be right up there.” I came in and I was like, “great! How was Tommy’s race?” They’re like, “he only did two laps.” I was like, “oh no.”

This is going to be tough. Obviously if you have to throw away your result from the first race, then that put even a bit more pressure on me for the second race. It was not like we all turned around and were like consistent, consistent, consistent. It was just go for it. I had to go for it, but then not crash as well and throw it away. It was a bit of a shame for Tommy in the first race, but I’m so pleased we managed to get it done.

Did you feel more pressure after the first race as well? Once you settled down you realized that everyone is going to expect you to do that again. The second time is always harder.

Actually, I felt better after the first race. I felt like, okay, I belong. That’s fine. That’s good. I’ve done it once, so I can do it again. Even in that second race, I had Jeffrey behind me and I learned from the French race a couple of weeks ago. I led him for two of the last two laps and then he got me and I thought, “this is not happening again.” I’m doing everything I can to stay in front of him, and I managed to do it. So, it was cool.

How much did Villars help you? Obviously, you got used to being in front of Herlings and defending your position. But even coming from the outside on the start, you did that at Villars and I feel like that whole experience just helped you leaps and bounds today.

Yeah, massively. It did. It has been, the last part of the season and getting a few podiums. I’ve been building in strength and I’ve been telling everyone, “right, the ‘Nations is going to be where it is at.” I knew I was going to be strong for this. My physical fitness is great. I know I am on point with everything. But, honestly, my team is unreal. The Rockstar Energy Husqvarna Factory Racing team is the best team ever. They give me a plan for everything. I don’t even have to think. I’m just able to go and ride. That is great because then I can spend more time thinking about how to go faster. I’m not planning something or planning this. I have got to give it up to Antti and the whole team there, because they are unreal.

Finally, what’s your plan now heading into the off-season? I guess you are going to rest a little bit or do you have immediate testing to do?

No, I have got this week off and then I start testing next week. We have got some team testing to do, then it is just getting to work. I like working. I feel great. I feel really, really good. This weekend has been absolutely amazing. I really like the hard work part of it as well because it gives you that good feeling on the weekends. You have that feeling of achieving something. Without working hard in this MXGP class, there is no chance. The boys are all great and everyone works hard. Everyone is great and has got a good team. It is something that I also look forward to. I also look forward to this off-season of training and taking what we have learned from this year and trying to progress and be even one step higher again next year.

I don’t expect to go and win all the races next year or whatever, but I expect to just be a step up from what I was this year and aim for them podiums and take all of that into account. When the time is right, I can take my wins. I think it has been a long process through my whole career, but this year has definitely been a point where I’ve been able to step up and put myself where I want to be. Now I’m looking forward to this off-season.