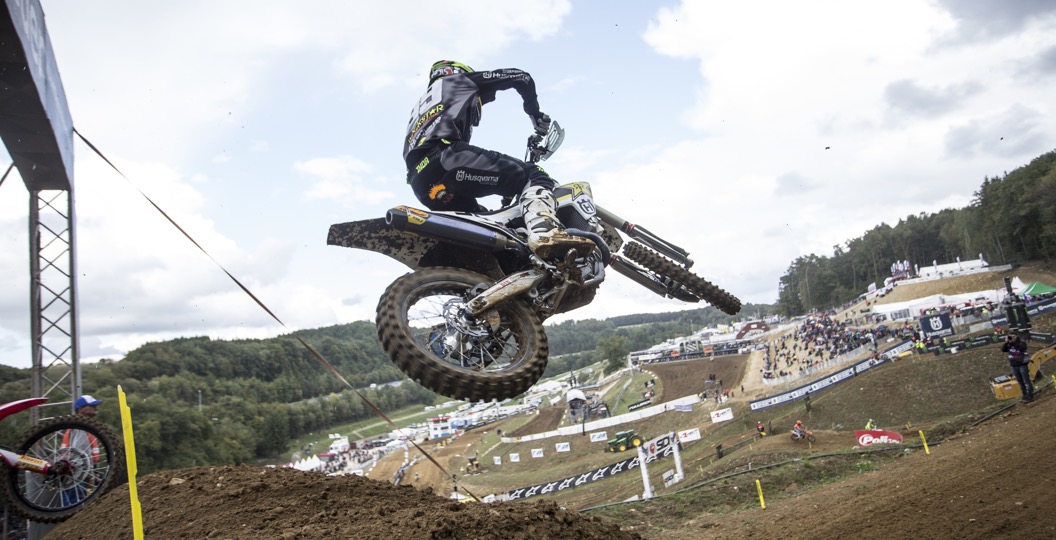 Max Anstie has momentum in his corner entering the Motocross of Nations, but what does that mean exactly? ’99’ discusses his current situation, excitement about giving back to the fans and expectations for what promises to be a memorable weekend below. This exclusive interview can also be found in the programme at Matterley Basin.

MX Vice: Just talk us through your first season in MXGP. What did you expect entering the first round? Have you exceeded those expectations now?

Max Anstie: Coming into the season, I honestly did not really know what to expect. I had not raced against any of these guys on the 450F before, so I just was not sure. In the off-season I felt good, obviously, but I did not have any expectations of where I was going to finish in the races. We went to the first round and I was right around the top ten, so the goal after that was to just get two solid motos inside of the top ten. We did that, then it progressed up to the top five. We got inside the top five and then our focus shifted to the podium. We have managed to get on the podium twice this year, which has been really good.

I ended up second in a moto in Switzerland and battled for the lead there too, so I feel like we have progressed really well. But, coming in, I was not actually sure how we were going to be. I knew obviously that my team was great and the programme that they have got me and my teammates on is perfect to go and get the job done. They expect us to be near that podium or around the top five all of the time. That was what the team expected and you have that pressure, but you also have the confidence that my teammates are right there and the team is the top of the top. That is what we are meant to go and do.

Has there been more pressure now that you are in MXGP? Obviously with the injuries that Tommy [Searle] and Shaun [Simpson] have had, all of the British fans have looked at you as their guy and been following your results. Have you felt that pressure and additional interest? Has it meant anything to you?

Yeah, it has meant a lot. I have a lot of respect for all of the MXGP riders out there, because I know they all work really hard. I know that obviously Tommy has been injured and so has Shaun, but all of the guys out there are working really hard. I think that has been the biggest step from MX2 to MXGP. There are not just five guys who are strong and good, there are fifteen who are really strong and they never make mistakes. You have to be on top of your game. I have just been focusing on what I need to do to go and get the job done. It has been great to have the backing from all of the British fans, to represent them and do the job the best that I can for them.

With that in mind, being the captain on the Motocross of Nations team at Matterley Basin is a perfect way to end your rookie season. Obviously, it has been a while since you raced in Britain anyway.

Yeah, exactly. It is just amazing. It is an amazing feeling. I was there back in 2006, when I was twelve or thirteen-years-old, watching. I was watching there and just thinking about how amazing everything was. I never thought that eleven years later it would be back there and I would be a part of it, let alone on a 450F! It is definitely cool and an honor to be chosen for that. I am really looking forward to it. I think I’m at a good point in my season now. I keep building and building, so am getting better and better each week. I want to go to Matterley Basin and fight for race wins.

Do you have any expectations as a team? Obviously putting the team to one side, you could win the MXGP class quite easily.

I want to fight up there at the front. The thing is that you need to be consistent, so we need to be solid on our starts and put ourselves in a good position. If I come around the first turn in the top three, then it will be nice to go and race up there. I know that we obviously go outside on the start sometimes, but other times we are on the inside, so it depends on what Mark Chamberlain decides.

The starts could be compromised a bit with certain things. But, definitely, I think the team can do really well. I think we have definitely got a strong team for that type of track. Dean [Wilson] is based in America and will be good around there. We all know what Tommy can do on the 250F, so he is going to be really good, and it is just another MXGP round for myself. I am going there to do my work, do my business and that is it. I’m going there to race as hard as I can and as fast as I can. If I can be up the sharp end, great. If I have to come through the pack, after starting on the outside, then I’m going to do it as fast as I can.

How is Matterley Basin as a track for you? You have had some good rides there, but also some terrible luck.

Yeah. It is a mega track though, right? It is a great track and has big jumps. It is easily one of my favorite tracks. I was born in Winchester, so it is not even far from home for me. I love it there. I have had some of my best races there. Yeah, okay, luck was not always on my side when I rode a 250F there. I have had some great races though and it is always awesome to ride in front of the fans. This time around it is definitely going to be crazy. If it is anything like it was in 2006, it will be massive.

Have you got anything special planned for the weekend, seeing as it is a home event, like t-shirts or anything like that?

Yeah! I am working on some Max Anstie t-shirts that would be cool for the fans and for the kids to get, but we have also got some cool ideas. My media team have come up with some good ideas. We are going to do some jersey drops. So, as you are reading this, one of my signed jerseys is probably hidden somewhere. It is your job to go and find it, so just check my Instagram (@MaxAnstie) story for the location. It is like an Easter egg hunt. You need to go and find my shirt. It is going to be hidden somewhere, then a picture of the location will be posted on my Instagram and it is your job to go and find it.

It seems like you have really stepped up your social media game this year, speaking of your fans, so that everyone in Great Britain can follow you as you race across the world?

Yeah, for myself, it was always something that I looked at and thought I had to be better at. I always felt like my personality was just hard to bring across, especially on social media all the time. We are just so busy and traveling all the time. It is hard to really portray that. I sat down with the guys at MX Vice, the number one guys on the media side in the UK, and came up with a bit of a plan to try and let all of the fans know what I am doing.

It is just about being able to express myself through the pictures, videos, the GoPro clips and whatever the fans want to see. A lot goes on during a race weekend and behind the scenes that you guys really want to see. I’m stepping it up with that. I am going to try to get bigger and grow as much as possible.

Finally, on the topic of social media, you must feel more of a connection with your fans after reading all of their comments? You are able to reply to them, read them all and just get closer to all of those people who are going to hang over the fence this weekend?

Yeah, exactly. It is nice to get to just talk to them and see how much they appreciate things, because we have not raced in England this year. It sucks a little bit, because I always love coming back home and seeing all those fans. I know obviously on a race weekend it is so difficult, because we are so busy and on a time schedule. I cannot speak to everyone out there, but social media has given me a bit more freedom to do that. I know it is still behind a phone or a laptop but, still, at least when I am sat at home and have a little bit of time I can see what people are saying and reply back. I can try to do my best for those people and be a good role model for the kids. I try to show that Great Britain can be right up there in this sport and elevate it to the next level.