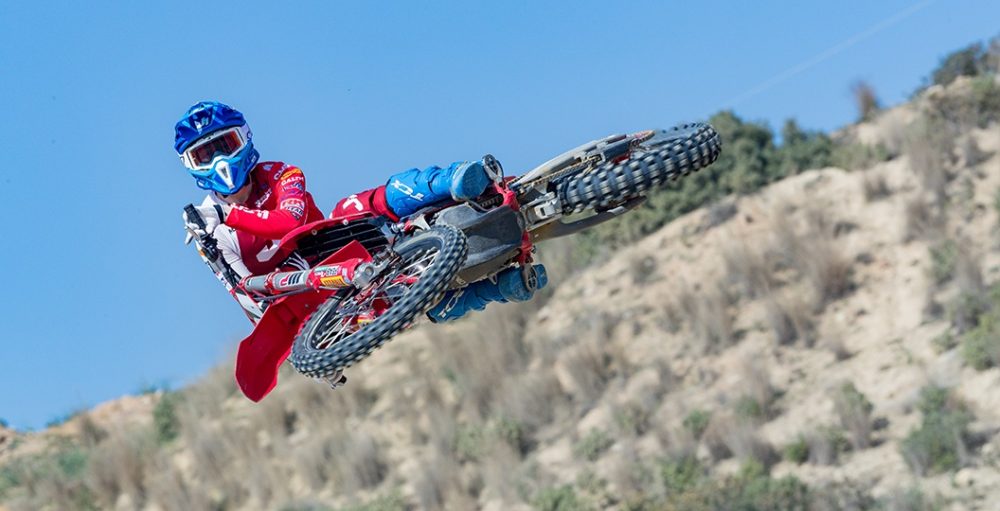 Kevin Horgmo of the SM Action GASGAS Yuasa Battery team had a quiet day at the opening round of the Internazionali d’Italia series, but it was actually a much stronger outing than the results would lead you to believe. Horgmo had a bike problem whilst running inside of the top five in moto one – something that happened at Riola Sardo last year – and then came from last to twentieth in the final moto. Not bad at all! To shine a light on the underrated performance, MX Vice editor Lewis Phillips called up Horgmo for his take on Riola Sardo.

MX Vice: You had your first race of the year yesterday, Riola Sardo, and the results do not look great. You were running top five before your bike problem in moto one, then the mixed race is what it is. I think there are positives you can pull from this.

Kevin Horgmo: Yeah, I was also sixth in the time practice. I was couple of seconds off, but I felt quite good. We do not have the top equipment that we will have at the EMX yet. I felt quite good and my start was on point in the first moto – I think I was like fourth or fifth off the start. It was just a little bit of struggle getting past the two-stroke and then, yeah, in the air I unfortunately had a technical issue with the bike and went over the bars. I had to  push the bike back to the pits, so that was unfortunate. I think the speed on those first laps was good and if we take the good stuff then it is mostly positive, except for that bit of a problem there.

With the Super Final races at these events, do you even care? They are not great for the MX2 riders and, honestly, it is more a case of just getting out of those healthy.

Yeah, after the first race I was not totally motivated to do the Super Final. There is nothing on the table and I had the fortieth gate pick, so I was all of the way over there with the 250F. I knew that I was going to lose off the start. I had a good jump over the gate, but then I was completely on the outside and last anyway. I struggled to find a good feeling with the track and everything after that, because I did not ride too much in moto one. I just took it as a training moto and finished twentieth, so nothing great. It was good to get out there and race our moto together with some people. The stress level is so different when it is a race, instead of practice, so it is good to just get it done.

Yesterday was obviously your first race with the new team. It seems like this is a really good team for you to be with. It looks like it is a big step up from last year, which is important, but it also seems to be a fun group of people to be around. That can bring the best out of you.

Yeah, for sure, like now I know that it relies on me and my performance in the race. I have people to take care of the rest and they are really working hard for all three of us guys. It is not like they have their favourite guys – they want to do the best for everyone. We get the same material and the same training. We do everything together, so it is also a good atmosphere. Alby [Forato] is a good person and Andrea [Adamo] is really nice to be around. They are really friendly guys. Living on top of each other for two months has actually not been too bad, because normally you start to hate each other. We get on quite well though! It has been quite good.

I guess this is giving you a lot of confidence as well, all of the work you have done with the team. Everything is going so well that I am guessing you have got confidence now that you did not have at all last year.

You know, it is so much easier when you can just stay together all of the time – you can just ask anything and they help you with it. If we need to change something, then they are open to everything to make me the best possible. It is also easier to talk together with the riders. If we need to change something about the programme then we can go together and say, “This looks like a little bit too much and we want to do it differently.” They are open to changing stuff and that is great. It is a real racing team and a big family.

Going back to when you signed with the team, was it a tough decision to drop down to EMX250? Did it make it easier knowing that the equipment would be good and so would the team? You are going back to EMX250, but you are going to do it properly.

Yeah, that is the thing. I was looking at some options in MX2 and there was some money involved, which I do not have. That was not really an option, but it was there. I was looking to do it. It is difficult to let a team like this pass, when you know they had such good results and there are a lot of people working for you to make you the best. I actually took like a month to decide. They let me have the time, because they knew that it was difficult for me to go back to the EMX.

They said it was no stress and to just let them know. One day I woke up and I was like, “I have the chance to go to this team and the EMX, so maybe that will make me even better?” It would be better than going to an MX2 team and it being like last year, with no support, so in the end I said that I trust that this team would do everything to make me the best rider possible.

Do you have a plan of how many MX2 races you are going to do this season? I guess you will be able to do the ones that do not clash with EMX250.

Yeah, but there are not too many rounds in Europe without EMX250. Now, looking on the schedule, I think there are like two or three. I think I will be able to do those, but definitely none of the overseas.

You have got two more rounds of the Italian series to go, but there are 80 days before MXGP starts. What do your next two months look like? What’s the plan from now until Oss?

I am not really sure, like training wise with the team and stuff. I know that now I went down with the training a little bit to be fitter for the races. I guess I will take an easier week after the last race and then start building off the bike when I am home. When I get back to the team then we will start like it is off-season 2.0. It is the same as last year more or less! I think one month before Oss we will go to Belgium as a team and stay there.