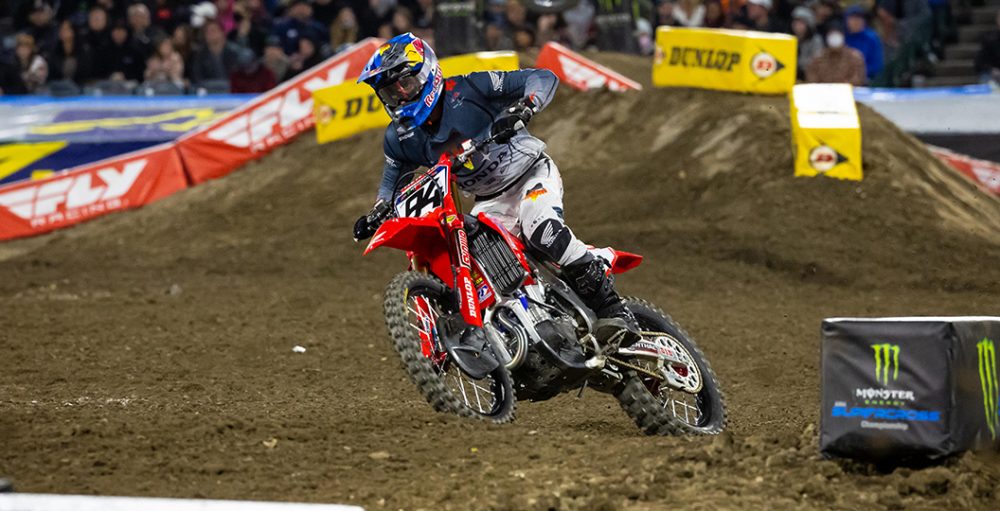 Ken Roczen started the 2022 Monster Energy Supercross campaign in the best possible fashion; he reached the chequered flag first and added twenty-six points to his championship total. Roczen had won the season opener three times previously, so why was this triumph such a surprise? The crux of the situation is that he did not have the most productive month prior to round one and made that quite clear to all who would listen.

“There were a couple of changes going on, then I went to see a doctor over there [in Europe] to try and figure some other things out,” Roczen said about his pre-season preparation in a media event. “Everything was going to plan until kind of like mid-December or the beginning of December. I came down with a gnarly sickness for some reason – it was not COVID-19 – and I am still battling the effects a little bit. It threw a wrench in our programme for this December and it was a bit of a struggle.”

It is not overly surprising that such a statement caused pundits and fans alike to move away from the Honda HRC rider. A month-long illness should be taken seriously, especially at such a pivotal point in the off-season programme, and some would argue that him finishing seventh in timed qualifying was an example of some rust. Roczen was just five tenths from the fastest qualifier though and that should have been a hint that he was stronger than anyone had imagined.

There was no sign of him struggling during his heat race, which he won convincingly. The lap times that he recorded from beginning to end did not fluctuate much at all – every time that he recorded was within the same second. The main event, which he led from start to finish, following a similar pattern, as he stayed in the same second for the first eleven laps of the main and avoided a significant drop in the second half. One could certainly argue that Anaheim 1 was Roczen at his best.

“I felt surprisingly good actually,” Roczen said about his form in the main event. “It just ultimately comes down to not riding much in December. It is not that you are necessarily less fit – it is just that when you do not do twenties all of the time then they feel foreign. I felt pretty good. It was a little weird having that big a gap, with that much riding time to go. I guess it was kind of nice with how tough the track was. It is just a weird position because you want to be careful but not too careful.”

Do the events of the past two seasons allow fans to really appreciate Roczen at his best? Winning Anaheim 1 is a monumental achievement and should ignite an avalanche of conversations about his title chances. It feels as though the common consensus is that everyone has seen this story play out before though. Roczen always starts strong – he had the red plate after three events last season and the year before that as well, then he had it after two rounds of 2019 Monster Energy Supercross. This is what he does.

Even if Roczen has a twenty-point advantage after the west-coast swing, most will still be sceptical. It is the second half where a microscope is placed on him. There were sub-par showings at the end of last year that remain at the forefront of minds and prompt a cloud of negativity. There is something that everyone tends to ignore though – he lost the title by thirty-five points last season and was twenty-two down heading into the finale. It is not like his season was a bust and he was closer than most give him credit for.

Is this going to be the year that Roczen puts it all together and claims the 450SX title? That is too far out to dive into at this point but remember what a force he is. Perhaps the turbulent month of December had an impact on his performance at Anaheim 1, more so than anyone noticed from the stands, and he will only get stronger in the coming weeks? History has taught us that he is difficult to beat through the first portion of the calendar.