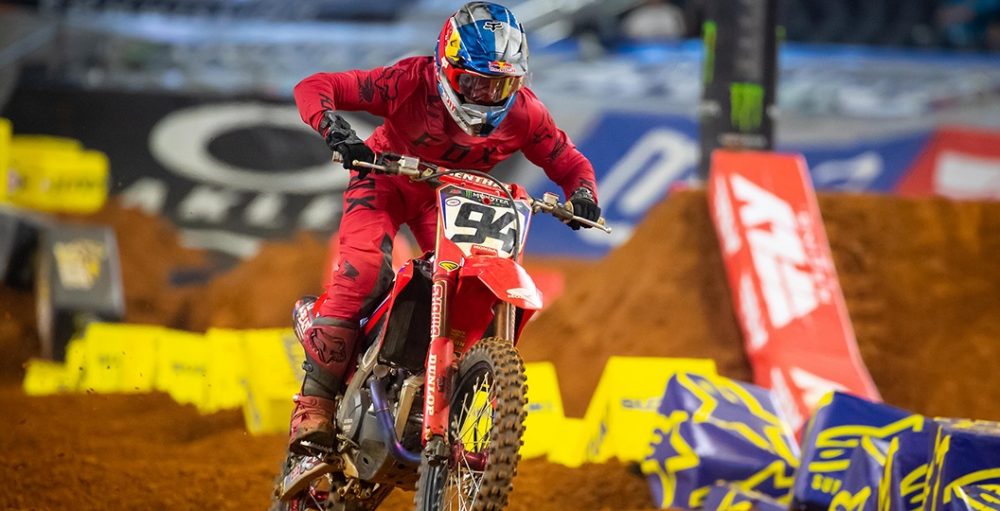 Ken Roczen has a history of starting a campaign in Monster Energy Supercross on the right foot – this season was no different. Roczen was clearly the main to beat across the first seven rounds, but things have started to unravel in recent weeks and caused momentum to shift into Cooper Webb’s corner. This thing is far from over, of course, as six rounds remain and Roczen only trails Webb by 12 points.

That figure may seem fairly minuscule, but when one takes into account that the gap was 16 points following round six then it suddenly becomes clear just how much this thing has slipped from his grasp. Roczen’s adamant that he must maintain the same mental state that served him so well earlier on – effectively not letting the highs or lows sway his mood too much – yet that task must be trickier to achieve as race wins become a more distant memory. Still, the goal remains the same.

“We have still got six rounds to go, so I want to focus on myself,” Roczen said in the post-race press conference. “I am keeping the dream alive. Of course, he is chipping away and winning a lot right now. I just want to go out there, do what I love and see if I can get closer at least to make it a good battle all of the way to the end. I had a much better start tonight – I just was not good enough. In general, I have been having good starts besides last weekend. I am just trying to keep my head up, keep chipping away and that is all I can do on a weekly basis anyway. We have got some races to go – we will go back at it again on Saturday and try again.”

Credit where it is due; Roczen has maintained a level head for the most part this year and hurdles have been placed in his path on more than one occasion. The incident with Cooper Webb at Daytona was the most recent troublesome point (joining a list that includes a penalty from the AMA and an issue with a backmarker at round three) and that did cause him to boil over in a post-race interview, something that he does not regret. There is no doubt that the outburst caused a spotlight to be placed on the struggles that followed in Arlington, as he pointed out.

“I said what I wanted to say, but of course fingers are getting pointed now with how my races have been,” Roczen explained. “I knew that – no matter how I finished in these upcoming races – fingers would get pointed. It is in the past. I have obviously not been on the podium lately, but I have been trying some different bike settings as well that have not really been working out that well. I went back to old faithful in the main event today and that felt a lot better. I feel like I am done tinkering around with the bike that much – I am just always trying to improve a little bit.”

Set-up issues have not been referenced before now, interestingly, and it would be most interesting to learn when he elected to travel off of the beaten path. Roczen was incredibly fast in Orlando and Daytona, despite mediocre results, so one would presume that the set-up struggles were encountered when attempting to find a sweet spot for the deceivingly slick Arlington dirt. That same venue will host round twelve, Arlington 3, on Saturday night and one would hope that Roczen will find a setting that allows him to do battle and get this title run back on track.

That Arlington 3 event is the current priority for Roczen, but not because he views it as crunch time for his title aspirations. Instead because that is the next event on the schedule and, as has been the plan all along, his goal is to focus forward and put one foot in front of the other. “I’ve had the red plate for more rounds than I have ever had in my life before,” he said in the same press conference. “I’m holding onto the positives and continuing to chip away. I would rather look at the now and what is ahead of me instead of looking back.”