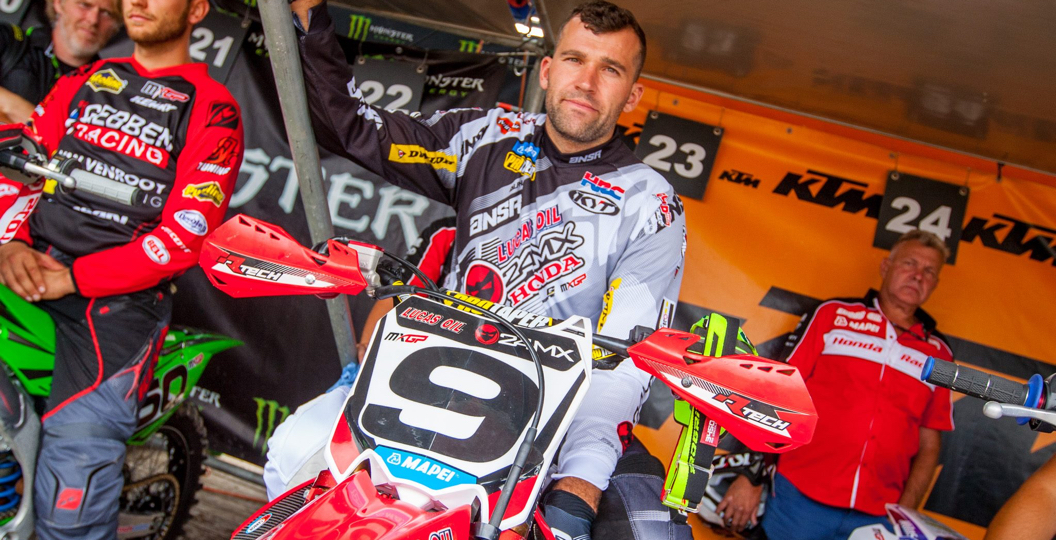 Ken de Dycker has experienced a turbulent couple of years and, consequently, has become the forgotten man in MXGP. A former Grand Prix winner and series leader, ‘Keeno’ never really got going in 2016 as various injuries (such as a broken femur and injured knee) have thwarted his efforts to establish himself as a major player once again. Sidelined and with no home for next year, the fire inside de Dycker still burns brightly as he believes he can get back to his former level.

MX Vice: 2016 was obviously a disastrous year for you with so many injuries. Just run us through everything you have overcome in the last twelve months…

Ken de Dycker: It was a difficult year. I started with a Honda and Belgian team, after coming from KTM; I was really looking forward to it. I was working with Joel Roelants, my trainer, and everything was going really well. We went to Spain, went training and it was actually perfect. I was feeling really good. A stone got caught in the chain on one day of practice and that changed everything. That was really hard; I thought it was going to heal quicker. It was a long time though, because of the surgery, and even now it is not one hundred percent. It was a year that went from one bad thing to another bad thing. It was difficult to recover from it.

Was it difficult to avoid pressure when you came back at Assen? Obviously you knew it was unlikely that you would be racing in America, so you had one race to prove your worth.

Yeah, but I knew also that I had only trained for two weeks before that. It was not healed well enough to race actually. I could race and not do damage to it, but I was not sure enough and overprotective with it. I wanted to have those two Belgian races to see how it worked, because I had six or seven months off a bike. It was difficult to get back on it.

They were really difficult conditions and I struggled with the bike; it broke in the first moto after two laps. It was difficult to come back, but I didn’t put any pressure on myself. I knew that maybe we were not going to go to America, but then the team decided not to. That was the only chance that I had. Actually, just before the US, the bike broke on a jump in practice and I had to jump off. I had a crack in my knee, so that was unfortunate. I knew that I would not be able to do any beach races or other events after that.

People look at your injuries and think you are just an injury-prone rider, but they do not realise that actually everything this year was out of your control.

Yeah, with the femur I went from Spain to France and had two days off the bike. I started riding after that, so it was a warm up for fifteen minutes and I was only seven minutes into it. On an uphill-waves section, a stone went into the chain and it pushed me over the bars. That was where it happened. It was not my fault really; I wasn’t tired or doing silly things. It was really unfortunate.

Then the most-recent injury [happened when] I came up to a jump on the second lap of my second twenty-minute session and I was not tired then either, but the bike broke and the front went straight down. All I could do was jump off and try to land over the jump, but I could not do that.

How long do you have left to recover from your latest knee injury? Do you still have a little while to go?

All the small pieces that were damaged in it came back together, so now I can start cycling and doing physio. In two or three weeks I should be able to do squats with weights and everything, then I’ll be able to go riding. Even then it will just be about building up again.

It sounds like the team you were with this year may not be running next year, but if they do would you stay with them? Did you have a two-year deal originally?

No, it was a one-year deal. They are not sure if they are running or not. I think they may keep running. They said to me that I could stay, but without any money or bonuses. For me, I decided directly that I would not do that. I would rather ride my own bike and get bonuses from some shop and for my gear, so I can earn some money. My mechanic, who is my good friend, also left the team, so there was no need for me to stay there for another year.

You were obviously happy with the team earlier this year though, especially after getting off the KTM that you ended up not liking.

Yeah, I felt really good with the suspension and aluminium frame as soon as I started riding the Honda before the Motocross of Nations that I did last year. It was not the same power as the KTM, but I could keep it on much better because of the suspension and frame.

Do you feel angry and bitter that you are in this spot? You are a former winner, so you should not find it so tough to get a deal.

Yeah, it is now like that. It is just because you do not have any results. Even last year I did not have any good results or anything, so it is almost three years in a row. If I went to Bercy, I can start talking with the manufacturers there about parts and everything. I know I can get everything directly from those guys – that is good to know. The factory teams, yeah, I can imagine that they need to go to the big boss and the big boss wants results. I can understand it, but it should not be so hard for Suzuki or Honda to give me bikes at a good price or free. I don’t think they really want it.

It sounds like you are prepared to go the privateer route for a few races at least, even if you do not get a deal?

Yeah, I am still looking at it. I have been talking with Suzuki and with a local shop; they are like one kilometre from my house. He called Suzuki Belgium up and they wanted to help already and give me twenty-five percent. KTM in Belgium wanted to as well. Twenty-five percent on the selling price from a shop is still like seven thousand and four hundred euros. It is really difficult to buy bikes and ride with them for two or three months, then sell them for the same price.

If I could do that with one manufacturer, buy them for five thousand euros and sell them for the same price before buying a new one, I would decide directly today and do it. But, like this, it is going to cost me maybe a thousand euros with every bike. That is no fun anymore – it will make stress. I have good sponsors, who have supported me for years, and they want to help me with everything, but I don’t want to ask too much of them. I just want to have fun, show everyone that I’m not too old and that I still have the speed.

If you set up your own deal with a bike and sponsors that you are happy with, but then a replacement ride came up a couple of rounds into the season, would you take it?

That is what I have already decided. If there is a team or I do it by myself, I will have contracts for my gear and everything so that it is free. If a team says that I can go and ride four or five GPs for them, I will then have no problems with my gear or anything. I can step out of it directly and do anything that I want.

How long do you think you have left at the highest level? You have obviously been going for quite some time now, so people do look at you as the old guy.

I think I am the oldest guy! Last year I told myself I wanted to do two more full Grand Prix seasons at one hundred percent. I am sure that if I start my own team I am not going to go overseas, because it costs too much money, so now I want to do one year and show something. If I get another deal and can do a whole season the year after, I would do it. Maybe I can do two more years in MXGP and then I could do the international races in Belgium, England and Germany.