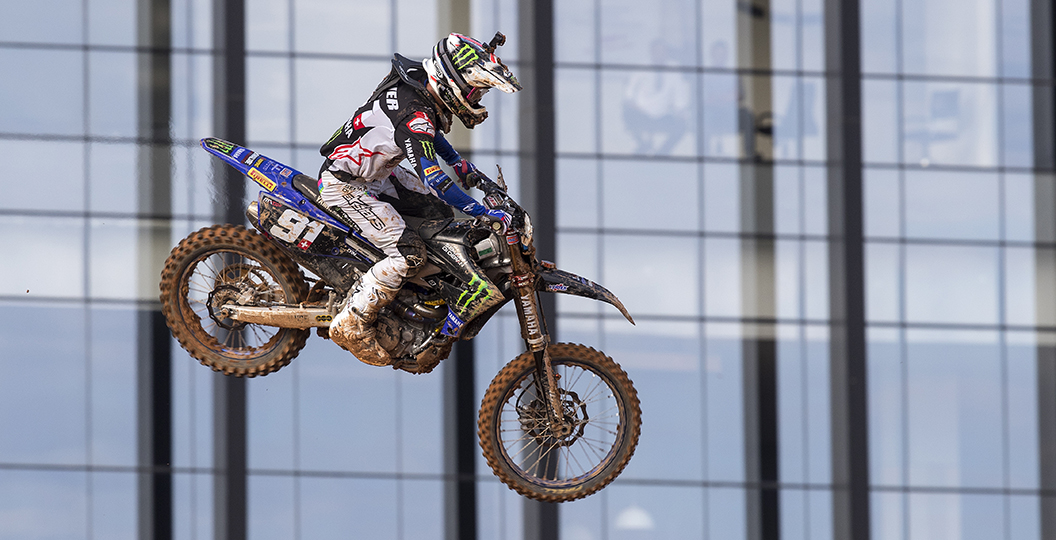 Monster Energy Yamaha Factory Racing’s Jeremy Seewer is currently going from strength-to-strength with each week that passes. Another podium finish, the second of his career, was recorded at the Grand Prix of Indonesia over the weekend, but he is now looking a little higher and shifting goals. Still, he is pleased with the progress and happy in his current surroundings. That is abundantly clear in this exclusive MX Vice interview from Palembang.

MX Vice: This is just normal now. Like we said in Latvia, you are a podium guy. You should expect that every week. Third overall. That’s normal. You are obviously stoked, but I guess now you are looking a little higher.

Jeremy Seewer: Yeah. It is hard to improve a lot again at this part of the season. There is a lot of travelling and tough races, but I feel really good. Especially every track we go to… The last five GPs have been so different, but I have done great everywhere. I made two podiums. Could have been four. Of course, luck and not luck is always a point. The other riders struggle with the same, but it’s looking really good.

In both races I could have been one spot better. I led [Glenn] Coldenhoff in the second moto, [Max] Anstie in the first moto and stuff. That is just me. I’m just preferring to be consistent. You say I’m third overall, but if Jeffrey [Herlings] would be here I would maybe be fourth overall. If Tony [Cairoli] was here, I’m fifth overall. That is racing. There are plenty of other fast guys seeing the opportunity to go on the box.

I’m happy to be in this position. I’m really happy how things are going. Like I said before, of course the championship is somewhere in there. The human brain is too small to forget about it completely. We both know. I really tried to put it out of my mind, put focus on the races and not think about having to beat this or that guy.

Any disappointment that [Glenn] Coldenhoff got you in the second race?

Yes, a bit. I actually thought I got him. I pushed hard for it, but he was doing well. When he got me, I tried to follow him and almost got him back. I closed in again. I knew I was on the podium and I just tried to finish the race. It’s been really tough out there. It wasn’t that hot, but just the humidity and the track because it was so tight…

It was kind of supercross style. Not too many jumps, but just a lot of traction that makes the 450F pull and you need energy when the 450F pulls. That was the tough thing. I think it’s going to be a bit better next weekend. It’s more fluent, faster with more wind. Not that much grip. It will maybe be not as tough.

Did the heat or humidity get to you today? When the second race started, were you sat on the line like, “I’m ready to do this?”

In the first moto for ten or fifteen minutes I actually followed Tim [Gajser] quite close. I made a small gap, but not that much. I started to feel the heat coming, so I tried to relax a bit and slow a little down just to breathe. I made two big mistakes, so then I changed my strategy and just pushed again… Pushing, pushing, pushing. I could make it happen. I was really happy myself to see the lap chart. Everybody does this, but it is so brutal out there.

I think we rode in one second the whole moto. Only the last lap is one or two seconds slower, but this is quite crazy actually. I felt quite second-hand after the finish, of course, but I think everybody did. I recovered well. After half an hour I really felt I am ready again. Went to the hotel room, took a shower [and spent] a little bit in the gym up here. Small recovery cycle, which is amazing. I just watched MX2 and stuff from the hotel room on my phone and went back racing.

I am glad you reminded me about the first race because, when you were following Tim, it was coming quite easy to you. I was watching the lap times and maybe one lap you were two tenths slower, but then you were two tenths faster and it was never more than that. It seemed like running his pace wasn’t exactly hard for you.

No, no. The pace was really good actually, but I do think Tim has that little bit of extra. Once you are up front and that confident and consistent you can just control it and watch. He cannot go that much faster. Of course, he always tries to go as fast as possible… He has a little extra even though the pace felt good. It’s just about riding that pace over the whole moto. This is the difference.

You say he probably had a bit extra, but I feel like you did as well. It didn’t look like you were riding on the edge or about to crash. It looked like it was coming easy to you.

Yeah, actually I always try to have a bit of extra, because the limit is always sketchy. You can do that if you really have to, last-lap actions and time practice are sometimes good spots. In the race if you go too far to the limit, the mistakes are coming. That is what I try, especially on the 450. That is my goal for the whole weekend to be smooth, to ride easy, to ride relaxed and to take the corner fluent because this saves energy and saving energy gives you more laps on the same pace.

Ignoring the fact that we have got the hotel right here and that’s amazing, what did you think of the track? A lot of riders have said it was better today than yesterday.

Actually, the rain made the track as it is now. That was the best thing that happened. The first two sessions, I felt alright on the track. It was so fast. One main line. Not flat, but just quite hard underneath. Then that big rain just changed it. The ruts got deeper. The amateurs had some mud, some fun, but they made it perfect for us. I think for this year, Teutschenthal and here they did a good job on the track preparation. They did not flat a lot overnight, just the main things. [They] left the ruts and watered it perfectly. It is actually a bit short, of course, but they made a good job with the track. Spots to pass, it was all there.

I guess it’s time to ask you about 2020. Obviously, the contract is up. We all know that Yamaha is a bit all over the place. You want a spot there, but are you talking to other teams? Are other people showing interest? I guess that everyone wants you.

Not everyone! I’m in a really good situation. This is true. They are sorting some things out. It’s not too many things, of course. I take some time for that. I don’t want to make the decision overnight, but it’s looking really good. We are just holding out, like you said. Yamaha is changing a lot, so we are waiting for a few answers there and some other options. I think in about two or three weeks we should know more. Now it’s just some question marks.