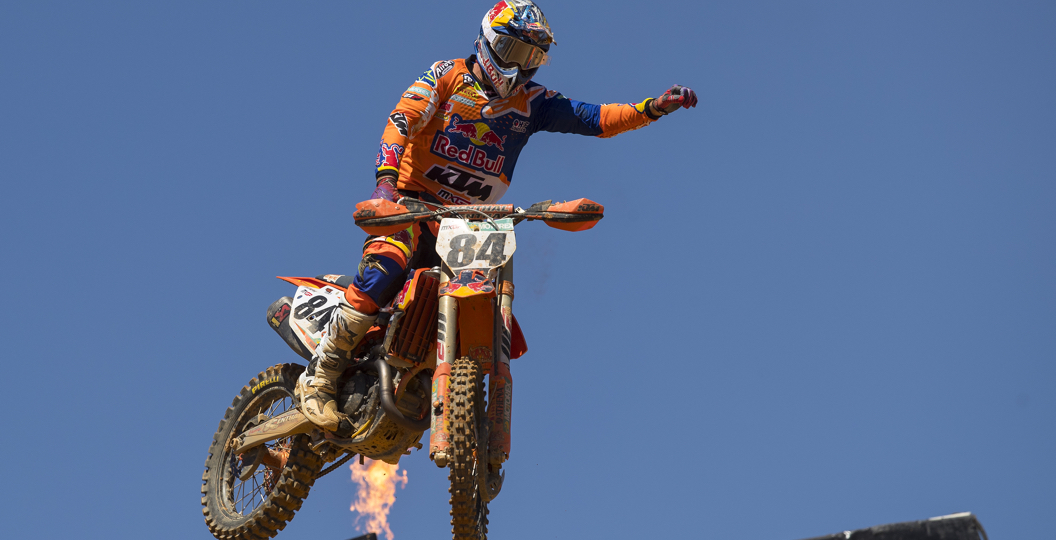 If you add up the points from the Grand Prix of Trentino on, Jeffrey Herlings would be just nineteen points down on Antonio Cairoli. That fact should confirm just how strong ’84’ has been recently and quell any doubts that you have. Based on this exclusive interview that we nabbed with him post-race, whilst dodging traffic, it is clear that only winning is good enough.

MX Vice: 1-2 on the day is great, but once again you are second overall and I guess you are getting pretty sick of that?

Jeffrey Herlings: Yeah. First and second is great and what makes it one and one? That ranks super great, but we got second and that sucked. It was like the fifth time this year we got second. We’ve only had one win and we are twelve rounds in. I don’t know. It is disappointing. The good thing is that after four rounds I was like fifteenth in the championship and I’m literally like five points away from second. In case something would happen with Tony, like what happened to me breaking a femur a day or so before winning the championship, then I’ll be the first guy in line, but hopefully that won’t happen to Tony.

If we can still pull off to get second in the championship, then we should be happy. We had a really bad start to the season with the first four rounds being that terrible and sucking so bad. We are happy to be in the position where we are now. I think in the last seven rounds we had like six podiums or something, so that’s been pretty good. We keep going.

I actually did the math and added up the points from Trentino on. If you did the championship like that you are basically tied with Tony, so I guess that’s nice to know.

So, actually, I’m having a red plate by now? Okay. We’ll share the red plate, because the first four races never happened. I think breaking the hand cost me the championship, so I just had sixty or seventy points after four races or something. That was so terrible. Now we’ve been having a lot of good races. Tony wins the overall, but has the same amount of points. Same in Teutschenthal – he didn’t get more points. Always the last couple races that he wins he gets third and I get second. We’re just playing with the points a bit, but I’m like ninety-six points down. I think something like that’s hard. We can never get the championship without him making some big mistakes or getting injured.

Were you surprised that you were able to make the win happen in the first race? Obviously it was tough to make up time around here, but you did it quite quickly. Once you passed him, you broke him a little bit.

Yeah. I should have done the same thing second moto, but I didn’t. I think the first moto was good, but I was pretty close to him. The second moto by the time I got into second he already had like a five-second gap. I think he made it seven or eight, but then I closed it again to four. Then I made some slight mistakes. At the end I closed back in, but then it was too late. I think me and Tony had an impressive ride last weekend and again this weekend. Even though this just isn’t a sand track, I think we did really well. We’ve been showing the last few races that we were way better than the competition. I think at Loket they have many, many good guys, so we’ll see.

Are you on your limit in a battle like you had today or was there still more to give?

Yeah, but then I’ll end up on my face, so I don’t want to do that. Last time I went over the limit was Ottobiano and I went home with a broken hand. That’s not something I want to do again. I’m willing to ride at one hundred percent but not go over, because then we just injure ourselves and we don’t want that.

What did you think of the track this weekend? Obviously it looks great and it was great once, but maybe it has kind of lost its magic a little bit?

No, I didn’t like the track that much. There was a lot of stones coming up and it was kind of one-lined. I think the other years it was better, but a lot of times we had some rain. They watered a lot, but they have more line opportunities, whereas now it’s kind of one-lined and [there are] a lot of stones. The track got really hard and slick. It was the same for everyone, so it’s not an excuse. Nobody went home with more points. We should be happy.

Last week was obviously a great result. Maybe not what you wanted, but it was a good result.

I ended up on the floor. I was almost dead.

Yeah, the ending was a bit rough. Just talk us through what happened after the race and all of that?

Alright. It happened on the Tuesday before, because I went jet skiing with my friends and I’m really white, like white, white. So, I went in the sun for like four hours straight on the water. Then I went home and I was like as red as I could be, like a crab. I got a little bit of a fever, kind of thing, because the heat got me. We had been training so hard for that race and then I just was stupid for myself to go to jet skiing just with the underwear. I got so sunburnt. I even posted a picture on the Instagram, I think, and then I got a little fever because of the sun.

I had diarrhea and I was throwing up, but I didn’t want anyone to know because I knew if Tony would know he would know I would be weak. Already by the first moto, I almost couldn’t eat. Then what little bit of food that I got into me I was sh*tting it out pretty much. It sounds disgusting, but it was just the truth. I felt even more disappointed towards my team, because we put in so much work and we were really going for the win. I screwed up with doing something that stupid. It was even off the bike! I just feel sorry for the team. We still went 1-2, so for KTM I think it doesn’t really matter. We were 1-2. For the rest, I think they should be proud. We were 1-2 two weekends in a row now. It will be great if we can pull it off to get 1-2 in the championship.

Last time I spoke to you in Germany you said that starts were the main thing you wanted to work on. They’re kind of fixed. Are you still working on those or have you got something else you want to fix?

Yeah, not getting second anymore. No, I think the starts are better, but still they are not great. Again, this weekend we were third and the second one we were in fifth. I think it was not that bad, but if you want to battle with Tony you have to be right up there. On the sand it doesn’t matter too much if you’re second or fifth, but on tracks like this you really need to be there from the beginning. We keep going and keep improving. We improved a lot of things from the beginning of the season to where we are now. Everything was new for me. It was good.