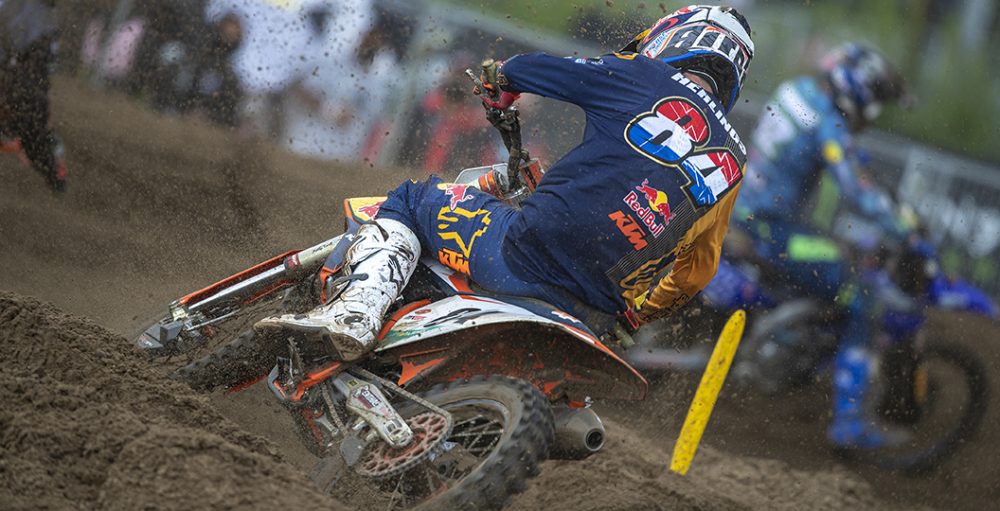 Jeffrey Herlings was not even supposed to be riding his KTM 450 SX-F at this point in time, let alone racing it to a podium finish at the Grand Prix of Flanders-Belgium. Herlings pushed through the pain of a fractured shoulder blade to win a moto and charge from dead last to fifth in the other, which left him in second overall and helped him claw nine valuable points back in the title fight. It was a heroic ride and one that had to be discussed after the race.

In this exclusive MX Vice interview, Herlings discusses the factors that led to his decision to race and the mixed emotions that he felt once the race programme had concluded. There is also some chatter about his plan moving forward, because this was not just a one-time thing. There is another test of his grit scheduled for this weekend! This interview was originally posted as an MX Vice post-race podcast on all major platforms.

MX Vice: You are mental. It is one thing riding with an injury, but you have done it time and time again. It is almost like this is normal for you now. Did you surprise yourself today though?

Jeffrey Herlings: Yeah, I think I did [surprise myself today]. When I went to the doctor after Oss, he predicted that in four to six weeks I’d be happy. It was 100% – it was just a big crack. If you look at a shoulder blade then it is like a plate that you eat from. It was just completely cracked in the middle. Yeah, he said that it would be four to six weeks – more or less six probably and then we’d work form there. It was like, “Ah, championship over.” I went to Loket, because we had everything planned for it, and I was there like, “This hurts mate. This really hurts. Another championship through my nose.” Tim [Gajser] had his crash and did not get so many points.

After that we went home like 51 points down. I was like, “Alright, that is not good. If we miss two more then we’ll be 150 points down and that is going to be difficult.” It got announced that Finland has been cancelled on Wednesday… I thought that would make it 200 points. We have four weeks off, now that Finland has been cancelled, so I was like, “Alright. If I can bite my teeth for two 30-minute motos this Sunday and next then we might still be in the championship hunt.” I tried yesterday and it was so sore. I did a 15-minute moto and a 30. I was just sat on the couch last night and could honestly not lift my arm up.

I was like, “Seriously, do I have to go and race a GP tomorrow? That is not going to happen.” I woke up this morning and was still sore after yesterday. I was like, “It is going to be a long day mate.” I just did a little bit of riding in the morning and got second in time practice. I finally got a good start in the first moto, just when I needed it. I was second the whole moto and managed to pass Romain [Febvre] for the lead. It was just a walk in the park from there. I got a good start again in the second moto.

I think I was fourth or fifth, but [Glenn] Coldenhoff and I got together and went down. We were dead last. That was a shame because I definitely could have gone 1-1. I was dead last and got back to fifth, like 20 seconds behind the leaders. I had so much pain. I almost could not hold onto my handlebars anymore. I just could not hold on and did not want to crash. I just managed to ride and close the lead back to 42. It is still a very long championship, but I prefer to be 42 points behind than 100.

If you could have wished for a moto then that first moto is what you would have wanted. Was there pain? Were you riding around and thinking that it was just insane? Once you got into race mode, were you just going through the motions?

It definitely hurt at one point, but it was less with the adrenaline. When I was riding alone, in those last few laps, I was like, “Dammit, it hurts!” I looked at the clock constantly and saw 2:40 [remaining in the moto] and was like, “I am going to really slow down this lap and save a lap.” I was really counting down the time, because it definitely hurt. Between the motos I could not lift my… Well, I cannot lift my arm up right now either. I was just like, “I don’t know if I can pull this off.” I did the sighting lap and just thought that I needed to bite my teeth for one more moto, then I would have seven days to recover. We managed to do that. I put myself in a bad position after the second turn, but if I could have signed for this result last week then I would have closed my eyes and just signed.

I know that you said that you did not feel pain whilst sat on the couch after Oss, it was just riding that was the problem. Do you feel pain stood here now?

No, I am not in pain right now. Do not ask me to do a push up though mate. When I am racing and get that impact, it really hurts. If I do not get a big impact, like a crash or guy jumping on my shoulder, then I am quite okay. I am not helping the healing process right now, but it will keep going.

Latvia is next weekend. I would presume that you are not going to ride at all this week, but would riding one day and keeping the shoulder warm be a good thing? I don’t know.

Yeah, but by the time that we go racing then it would be cold again. I hope to do a session on Friday to see if it has improved a bit. It is not so nice to ride with so many painkillers. I was on the line like [grunts]. I had to do it. I think that I will have to use some painkillers to get through the day in Latvia, but after that then we will have four weeks off. I can really heal up and start prepping myself for the second half of the season. We are six rounds in, but there are only 12 remaining. We should not lose many points.

Are you happy right now? It’s hard, because you would have signed on for this result. A 1-1 was possible though. It is a tough one to manage with your emotions, I guess.

Yeah, it is a pity. Sometimes you should be happy with what you get. I was sat down the hill at Loket with tears in my eyes almost like, “Damn. Another championship is gone.” Now we are back in the hunt. We are far off, 42 points, but a lot of things are possible with so many rounds to go.