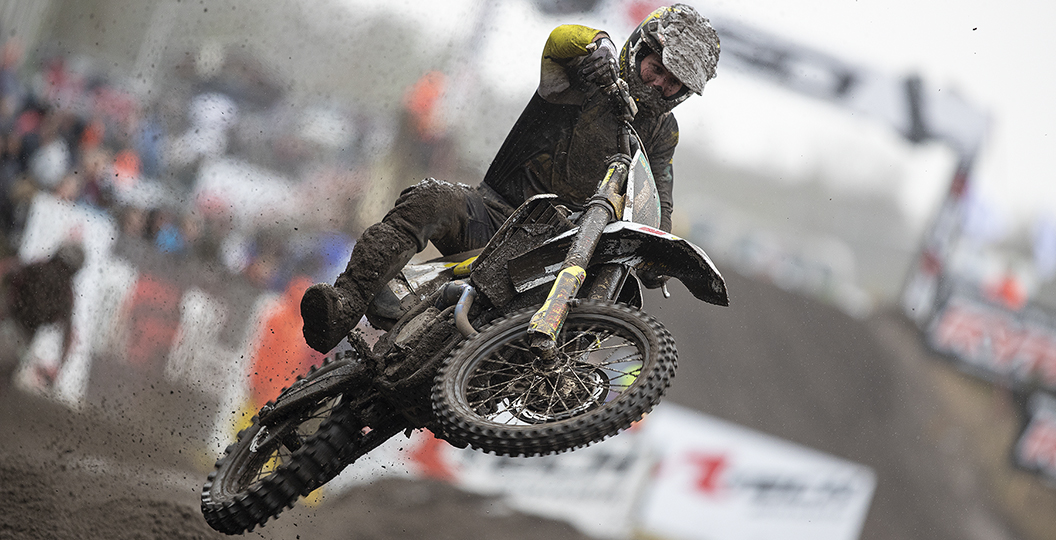 Jed Beaton has quietly had a phenomenal start to the 2020 FIM Motocross World Championship. The fact that Beaton has not actually stood up on the overall podium means that he has slid underneath the radar somewhat, but he is right in this thing and sits third in the championship standings. Beaton was actually in line to win the Grand Prix of Great Britain at one point! Does a positive start like that make this break even tougher to endure? That is one of the reasons MX Vice editor Lewis Phillips called the Rockstar Energy Husqvarna Factory Racing rider up.

MX Vice: Two rounds down in MXGP – not that anyone would know it – and it was actually an amazing start for you. You proved what you can and should do really. Does that mean this break is the worst thing ever though?

Jed Beaton: Yes and no. It was obviously a good start and I was really happy with the progress across the first two rounds, and where I was at. It was nice to come into the series with no injuries, and just to have peace of mind that you can go to the line and nothing is wrong. I could just ride and try to improve each time. You know what I mean? You do not go to the line half doubting yourself. It was just really easy to go to the line – I was not nervous like I used to be and stuff like that. I think that just made it much easier at the start there.

This break is the same for every single rider, so I do not feel like it is a disadvantage for me or anything like that. Everyone is in the exact same situation. I feel like if I can just maintain what I have got and then when the season starts back off again start chipping away again… That is really the plan for now. I have just got to maintain what we already have. Hopefully when we start riding and stuff again it all goes to plan, then racing will start up and we will hopefully pick up where we left off.

Out of the first two rounds, which one were you the most pleased with? You could have won Matterley, so that was great. Valkenswaard is not your cup of tea though and you were right there at that round too. What were the happiest about?

I was actually pretty pissed about Matterley really. I obviously had a good first moto, then in the second one I felt like I was riding good and just had a small crash. That small crash cost me. I couldn’t get into much of a rhythm after that… I was obviously pissed. I wanted a podium, just because it has been quite a while. I was in a perfect position for it and threw it away. That was my fault – I was quite pissed about it. At Valkenswaard I didn’t have a bad first moto, but I got sixth after working my way back up from a small crash.

I got second in the second one and thought that maybe I got on the podium. I didn’t know what was going on. I was quite a bit happier with Valkenswaard than what I was with Matterley, that is for sure. It’s not really my cup of tea, sand like that, like you said. I have been here for like three years now… I have done four winters here. I feel like I am getting more comfortable and riding the sand better now, but it is just good to see that paying off. That is normally my lowest point.

You do not think this break is hurting you, like you said. Do you think it would have helped to get on the podium at one of the first two rounds though just to get that monkey off your back a little bit?

Yes and no. It would, but I have a plan this season and my biggest goal is to be consistent all year. I think two fourths to start the year is not too bad. If I had gotten two sevenths or two eighths then I would be quite pissed, but two fourths is not that bad. I have showed that I have good speed and can be right there to get on the podium.

It is not really hindering me at all. It is only the first two rounds… It was planned for there to be twenty, but now we do not know how many there will be. I for sure think there are a lot more opportunities to get up there. I’m not too worried about it. I’m just worried about getting through this period, then seeing how we go when racing kicks back off again.

It is funny. You can say it is not hurting you, this break, but it would have helped a ton last year. It is the same for guys like Jeffrey Herlings. It makes no difference this year, but boy it would have been handy a year ago…

Yeah, sure. It would have helped me a ton last year, because I had so many niggling injuries and kept trying to come back too fast. Stuff like that was going on. It for sure doesn’t hurt too bad this year though. I’m in a pretty good mind space. I was actually pretty worried about what was going on the first week or two, but at the moment no one can ride their bike or anything like that.

There is no advantage anywhere. Everyone just has to stay home. It’s just a relaxing time now. We have to treat it a bit like an off-season, especially with the plans for the season to go a long time this year. We don’t really know the plans for next year or anything like that yet either. I have just been told to relax a bit and keep doing my training. When I’m not training I just need to switch off though.

Are you treating your off-the-bike training as if this is like the beginning of November or around there? That period where you have just had your holiday and haven’t started riding, but are starting to build a base back up.

Yeah, that is exactly what we have done really. When you come back at that point then it is really cold and stuff like that. It’s not difficult to build a base, but it is not enjoyable to do that. The weather is good at the moment – it is pretty crazy how good it is – so it is pretty enjoyable doing it right now. Doing the long cycles and stuff like that is not too intense, but it is good that I’m doing that.

If I was not cycling for a couple of hours then I would literally be sitting around doing nothing all day and that would have been driving me crazy. I’m pretty glad that I have still got stuff to do. My girlfriend is here now too, so it is good to hang out and do stuff like that. If that was not happening then it would be a pretty tough time.

You were not tempted to fly back to Australia then, like the rest of the riders in the series? It looks like everyone has gone.

Nah, not really. I have got my own set-up over here now with an apartment and stuff like that. I don’t really see the need to just pack up and go straight home. I am pretty settled in over here. Trying to travel and fly at that point is quite dangerous anyway. Well, not dangerous. It’s just risky, especially when we don’t know what’s going on. They could make rules that when you come back you have to stay in quarantine here. I know you have to do that if you fly back to Australia now. They might make more rules or it could even be more difficult to come back here. I think it’s just easier to stay here, because I’m around the team still.

Two more things for you. I feel like everyone has forgotten that your team has changed quite a lot this year, even though it’s kind of the same. It’s a weird thing. Does it feel different to you? It is obviously a good place to be. It seems like the perfect set-up.

Only one thing really changed, to be honest. Everyone who was around last year is still there. It doesn’t feel different at all really. It feels a bit easier to walk into the workshop this year, because everyone is quite happy. I don’t know. People were not as normal as they normally are last year. It’s just easy to walk in there now and make jokes. Everyone is in there and working hard. Stuff like that is just a bit easier. You know what I mean? It doesn’t seem like much is different, but I can just feel it. It’s a bit of a better atmosphere. It is quite good.

This is a stupid question, because who knows. No one wants to talk about their expectations, but do you have certain things you want to achieve at whatever rounds get run this season? You can win races. That’s the goal, right?

Of course. If I didn’t have the goal to win races and stuff like that, then I seriously would not be doing it. I packed up my whole life in Australia to come all of the way over here. I really didn’t want to come here to get second or third. I really want to put as much effort as I can in and then see how we go. The goal is to win races and get some overalls, for sure, then just build and see where we end up towards the end. Hopefully we can have a shot at it.