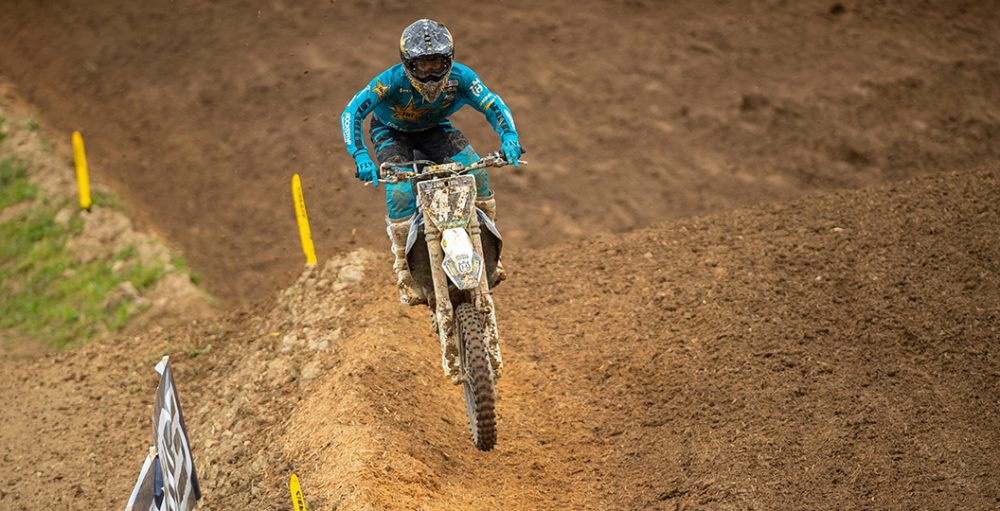 Rockstar Energy Husqvarna Factory Racing had a horrific start to the 2021 Lucas Oil Pro Motocross series; Jason Anderson dropped out with an injury, Zach Osborne followed shortly after that and now Dean Wilson is struggling with his own health issues. Jalek Swoll gave the team something to cheer about at High Point over the weekend, however, as he ripped to the first moto victory of his career and eventually turned that into an overall win in front of the passionate crowd.

Making his win even more impressive, it was the first time that he has ever climbed onto the overall podium in Pro Motocross. It was certainly one of the most surprising victories in recent memory. That also meant that he appeared in a post-race press conference for the first time, tackling questions from the media. Swoll’s answers are below. Another point to note is that the 45 points that he bagged at round three pushed him up from eleventh in the championship standings to fourth.

MX Vice: Where did this come from? I mean, I know Thunder Valley was better. That was a sixth in a moto though, so how did you go from that to winning?

Jalek Swoll: If I am going to be quite honest with you, I do not even really know. I think today I just felt a lot better and meshed a lot better with the track, to be honest with you. I never really felt comfortable on outdoor tracks and stuff like that, especially these pro nationals. They are a lot different from, you know, what we were racing on as amateurs. I don’t know, I think today I felt a little bit more at home and everything clicked.

During the broadcast, Jason Weigandt and Grant Langston were discussing whether you knew the points in moto two. Was there anything on your board or were your team letting you know that you needed that position?

Yeah, I had no idea what was going on. I do not even think I saw the pit board in any moto. I was like so focused, and I was not even paying attention at the end of the moto. I knew that if I stayed in third then that would be a good spot. I did not know if it would be for win, but I figured a 1-3 would be good for a podium. I just wanted to stay there and then I had some pressure from [Garrett] Marchbanks towards the end. I was just comfortable on the track, and everything was working well. I found a little bit of a gear and held on for third, which got me an overall. I was just thankful to be on the podium, to be honest with you.

You mentioned the track there, was there anything that played to your strengths with the way that the track was prepped? It was probably prepped a little different, with the anticipation of the rain.

I knew the day was going to be good when I had pretty good times in qualifying. That is my biggest issue, qualifying and then I have a bad gate pick. That was good, but usually I am not that good in the ruts. I do not know – it was just one of those days where I just felt like I was riding like myself to be honest with you. Like I said, everything clicked off. I just finally got some good starts and was able to see the front group. I think that was just one of the biggest things that was different from the first two races.

After you won the first moto and you went back to the hauler, riding the high of coming up and winning a moto for the first time, what was that hour like for you when still having to build up again for the second moto?

Yeah, see, like I have been saying all year, I have just been really focusing on having fun and letting the results come. I honestly was not too high on the win, like I was obviously pumped with it being my first win and all that kind of stuff. I know that if my teammate did not have the issue that he had that I would have got second, so I was not too stoked. I feel like I have the ability to go out and win a moto straight up, so I will celebrate that one a lot more than I did one today. Nonetheless still so happy and just on the box, which is what we shoot for.