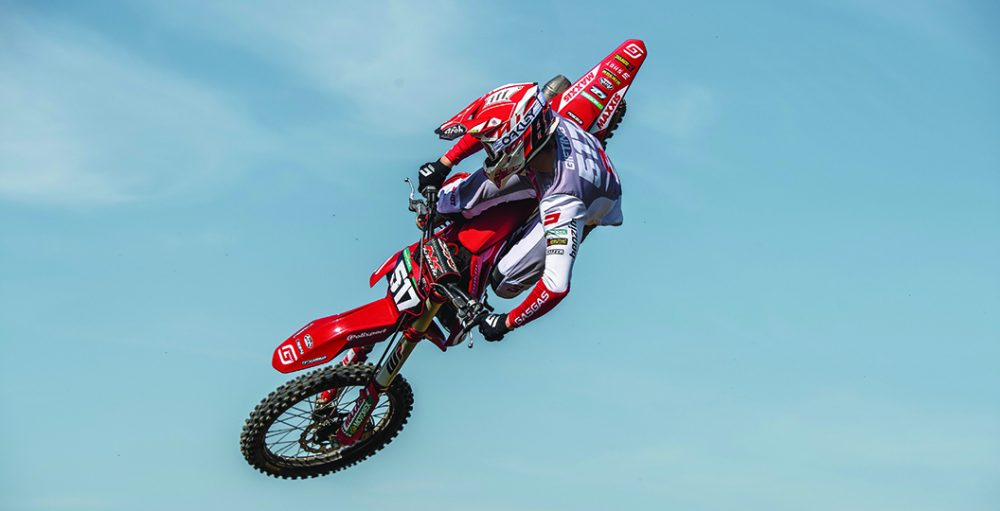 Isak Gifting was a name that few would have been familiar with twelve months ago, but that is far from the case now. Gifting picked up a fill-in ride with DIGA Procross GASGAS Factory Racing towards the end of last year, immediately impressed with a top-three finish and then secured a full-factory contract for the 2021 FIM Motocross World Championship. Rather than being an underdog, the weight of expectation now sits firmly on his shoulders. How is he handling that and everything that comes with preparing for battle at the very highest level?

MX Vice: You have done more racing than anyone else in the last couple of weeks, with races in Sweden and Italy. There has been quite a bit of success too. Even though things did not go quite as well in Italy, it still seemed as though it was a positive weekend overall.

Isak Gifting: Yeah, I have done three races so far. Two in Sweden and one in Italy. It has been quite alright so far. I have found some positive things in my riding – I can see my speed is there. Consistency and starts are getting there. It is for sure some confirmation that I have done something right. I think that now I will not do anymore races. Maybe one in France, before the first Grand Prix, but otherwise we will just keep training. I have some stuff I want to work on before Russia, but I feel quite alright. It is nice to get some gate drops done and everything.

Was it your choice to do this many races lately? Are you one of those guys who would rather race, no matter where it is, instead of spinning laps at a practice track?

Yeah, usually I do not want to race so much. The MXGP season would have started already, with EMX for me before, and then usually I do not want to do anything else. It is a bit unusual for me also. These times are quite special, with not so many races. The Swedish races started, and I thought it would be pretty cool to go now with the factory bike and everything. Just to go home to Sweden and show myself. The team wanted to go to Italy also. It is a bit more than I am used to, but I think this has been positive for me.

Uddevalla looked like a complete mess. Maybe it was quite good though, because there were four motos in completely different conditions.

Yeah, for sure. It was a f**king mess, especially on Saturday. Oh my god. That was a bit of a disaster, I would say. We still got a lot of riding in on those two days and the track changed a lot by Sunday. There were a lot of ruts, and it was a little bit drier. It was a very challenging track with a lot of lapped riders. Some good riders came this time too, from the factories, so I appreciated that.

Going back to the end of last season, you were one of the biggest surprises. Did it shock you how quickly you got comfortable at the front in MX2?

Yeah. I knew I had the capacity to be top ten, when things were going right. I mean, those were the first GPs of my life with a little bit of a different bike and new team. I was really nervous in the beginning. Things just worked out great though. It got better and better. I realised that I could crash or whatever and still pass riders to go into the top ten. That gave me so much confidence, so after a while I wanted to be more in front. I managed to do some good starts after a while and just went for it. Suddenly I was running with the top guys, and it quickly became very natural.

Were you riding without pressure last season then? Did you just think, “I am not even supposed to be here so we will just see what happens?” Was there more pressure, because you saw it as your one shot to show what you can do?

For sure you could say that I did not have pressure, because I did not have anything to lose. This was also like my one and only shot though. If I performed really well, I knew that maybe I could get a contract or something. The plan was definitely just for those last few races though. I had to prove myself, so I just went for it and things started to go alright. They were starting to talk about a contract for the year after and stuff. I just thought, “I need to keep this going. I need to stay consistent. I need to not f**k up some races.” I don’t know. I just went for it and did not feel so much pressure, even though I had a lot of pressure from my side. I knew that if I wanted to succeed then this was the time, otherwise I would be gone.

I would say that for sure I feel a little more pressure. I want to do better results and stuff, and I know what I can do. We have actually been talking quite a lot about this, to not put so much pressure on myself. I am not the main guy to win the world title and stuff. I am just still working to get there, to win a world title one day. I feel quite comfortable and also more comfortable with myself. I know what I can do, and these pre-season races worked out well. My fitness is good and everything. We will see how it goes, but I feel quite positive so far.

I guess your first goal for this year is to just get on the overall podium once. If you can do that, then you would be happy?

There are a couple of weeks to go before Russia. Do you have anything in your mind that you want to improve on the bike before then?

Yeah, I have. I have some things that I am working on with the bike. I still think that I can improve on how I did at these pre-season races. I will, for sure, once we get these things right. I cannot really say exactly what it is, but we have some things that I am not really one hundred percent with. I am sure that we will get there though and that will help me even more.

How are you at testing? This is your first year on a factory team and there is obviously a lot of stuff to go through.

For me, I like it. I believe that I feel the bike very good and can feel very small changes. I do not know what the suspension guys or the factory guys think about me. I don’t know if they would say the same, but I would say that I am pretty good at feeling the bike. I can feel small things that maybe not everyone can. I can feel everything we change at least!