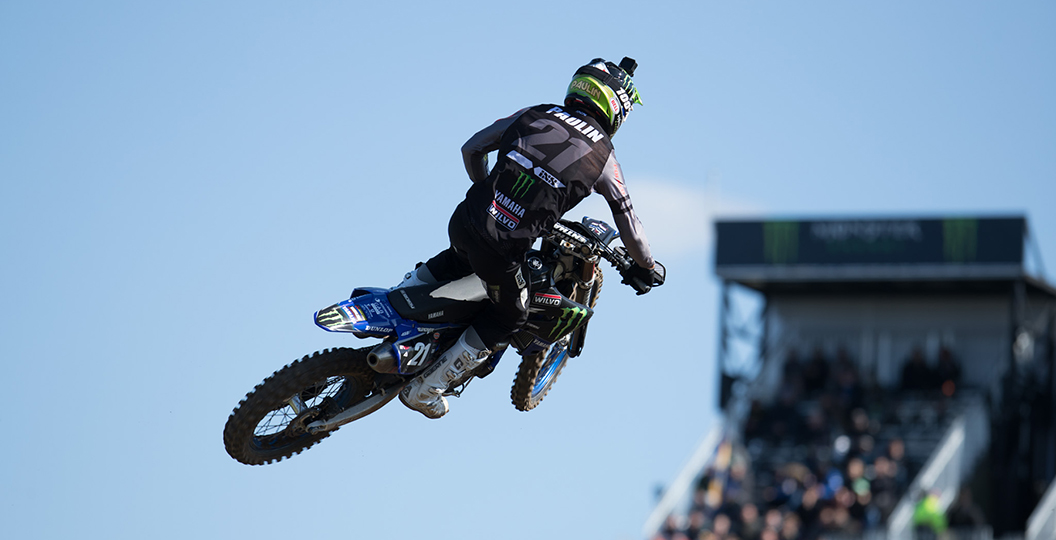 Gautier Paulin has claimed many times that he has gelled perfectly with Monster Energy Wilvo Yamaha MXGP and, based on how he has performed at rounds one and two, fans have no choice but to believe him. Paulin landed on the podium at the Grand Prix of Great Britain and then reflected on his first trip to the box in his new colours in this exclusive MX Vice interview. This interview was originally posted a podcast elsewhere on the site.

Gautier Paulin: Yeah, we are positive. We are only at the second round and we did a podium, so for sure it’s positive. It was a strong ride. Second and third today. First moto without the mistake I could have pushed to maybe do something better. It was good. We improved a lot. Like I said in the interview before Argentina we had to pack the crate and put the bike in.

Now after the race we have been working hard, so it paid off. The second start was much better. We will continue working hard on our weak points, myself to get to the speed where I want to be and also with the bike. The team is strong behind me and we are pushing.

When you said in Argentina that there was that one thing that you needed to work on, that was something to do with the starts then?

In the first moto you didn’t close in on Tony [Cairoli] and run him down to take the win, but you did keep the gap at five seconds for ten laps in a row. That obviously proves you were riding at exactly the same speed as him, which is still a really positive thing. That proves if you get alongside him out of the gate and start with him, then great things are going to happen.

I did close the gap. I did close the gap when Antonio got the lead and [Tim] Gajser crashed. Then I closed the gap and I made a mistake on the off-camber, which gives Antonio his comfort zone of five seconds. He did two good laps in a row, so when he is on that situation he is the strongest. I know Antonio. We’ll keep working to be better.

Any difference for you between motos one and two? Obviously, moto one you kept Tony close. Moto two you drifted back a little bit more. Track conditions? Bike set-up? Anything that kind of played into that?

I had a much better start actually in the second moto, so this was really good. Then the sun was really low. The track was really hard. I didn’t put myself in a good spot with good lines and stuff. I make a bit too much of stop and go in those deep ruts and that cost me that gap. Once you are alone, then of course pushing to be ten seconds closer wouldn’t put me in a better position.

I build up. Need to enjoy this weekend with this podium. We’ll keep working on my weak points, but it was good. There is plenty of stuff to improve, but the second moto definitely a bit more tight track. Was a little bit more dusty. Sun was low. To push on the spots that you don’t control one hundred percent and that wasn’t the best. The track of Matterley was really good, I have to say.

Finally, going to Valkenswaard and a track that’s been pretty good for you in the past next week. How are you feeling in the sand on the Yamaha? are you excited?

You will see. No one has seen already in the sand with the Yamaha, so nothing comes for free. We’ll keep on the same line.