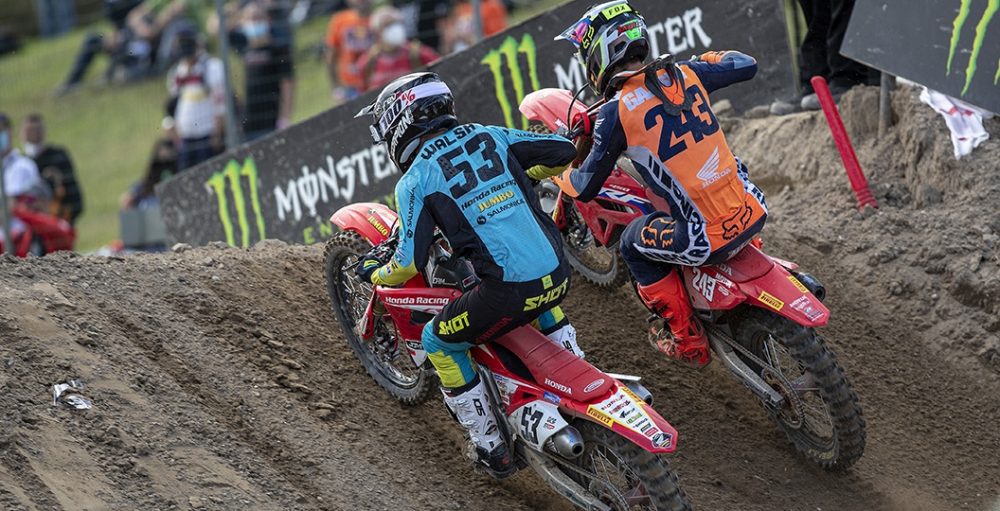 Dylan Walsh was arguably the best story at the Grand Prix of Europe, round eleven of the 2020 FIM Motocross World Championship. Walsh ended up leading the first four laps of the first premier-class moto, despite immense pressure, and discusses that in this exclusive MX Vice interview. It was one heck of a ride! This interview was posted as an MX Vice post-race podcast, presented by FLY Racing, on iTunes and Spotify.

MX Vice: I don’t know what your results were exactly today, but who cares? Doesn’t matter at all. Fact is, you showed how fast you are. You showed how good you are on a 450F. You showed you can get it done. Those first ten minutes of the first moto were unreal. I definitely think you opened eyes. I guess that’s what you are here to do, huh?

Dylan Walsh: Yeah, exactly. Today was a huge step in the right direction. On paper it looks sh*t, obviously, but I led the first eleven minutes of the first moto. It was not even that I was struggling! I think I set one of the best lap times of the race, so it was good. It was an overwhelming experience, because I’ve dreamt about this for a long time and it actually happened. Unfortunately, I was too excited and just made a rookie mistake. I didn’t adjust my clutch in the first ten minutes and completely burnt it out, so did not finish that moto. I’m here to try and impress as much as I can, and show what I can do with good support around me. Hopefully I’m showing people I can be something.

Gajser was obviously a little frustrated behind you and making some noise. How hard was it to kind of stay focused and not let everything that was going on behind you get in your head?

Yeah. I could hear him screaming behind me, but I was just trying to clip lap after lap off. We all wake up. We all have breakfast. We all sh*t. We are all the same, so I do not look at him differently. I believe I should be up there. Just give me some time and I’ll be there.

Tim screaming, for some riders that would make them cave in. I feel like you are the type of guy who would find it funny though and just be like, “Well, let’s keep doing this then.”

Yeah. To be honest, the first time I heard it was on the triple after the pit lane and I just laughed. It made no sense what he was saying! I just laughed like, “I know who’s behind me.” It was good fun. I’m just stoked I got the opportunity.

Are you actually surprised you led for as long as you did? I think everyone knows you have got speed. Once you got in the lead were you like, “Okay, I have led a lap.” Once you were four laps in were you like, “Hang on, what the hell is happening here?”

Actually, to be completely honest, I led the first lap and I was like, “Oh, that’s one lap. Okay then, that’s two.” Let’s see how many we can do. Tim tried to pass me a few times and I shut it down. Ultimately, I made a little mistake and he got by me. It got chaotic [laughs]. I’m proud of my effort. I feel like I’m making big steps in the right direction.

How were the arms after six laps of leading?

I guess we have got to talk about that second moto, which did not exactly go to plan. A solid start and then you got cleaned out. Your race ended, basically.

Actually, it was going pretty good. I started about tenth and then by the second lap I had passed a few and got into eighth. I felt pretty in control, but then I ended up getting cleaned out by someone. It is what it is. I got up in last. I tried to make the best of what I could do. Also [Jorge] Prado crashed on the second lap and had to come from behind, so I wanted to keep him behind me the whole time. It is what it is.

If we want to build some hype here. We are going to Spain next weekend. I guess it will be jumpy. You could get a start there and lead for a little bit, because that should be a better place for you. There is no reason why today is just one and done. We could see this again.

Yeah, definitely. That’s the goal. It’s a new track for everyone, which is good for me. I’m excited for it. I know I can get good starts. I’ll try to get a little bit of qualifying done better. I expect myself to be up there more often and see what we can do.

How bored are you of this place after a week here?

Yeah, it’s been long to be honest. I actually liked the track, but then I was hearing that we could be staying for another Sunday and I was like, “Oh.” It’s not too bad. I think there are worse places to spend three GPs at, that’s for sure.

We have talked about how you are quite happy to take a 450F ride in MXGP next year. After today, I guess just keep your phone on you and make sure it’s not on silent. I would presume someone is going to call.

Yeah, I hope so. That’s all I’m doing. I’m just here trying to prove myself. It’s a fill-in ride, so obviously nothing is in place. I am just trying to show what I can do. I love the 450F, as most can see. I think it fits me quite well. Hopefully someone calls for next year.