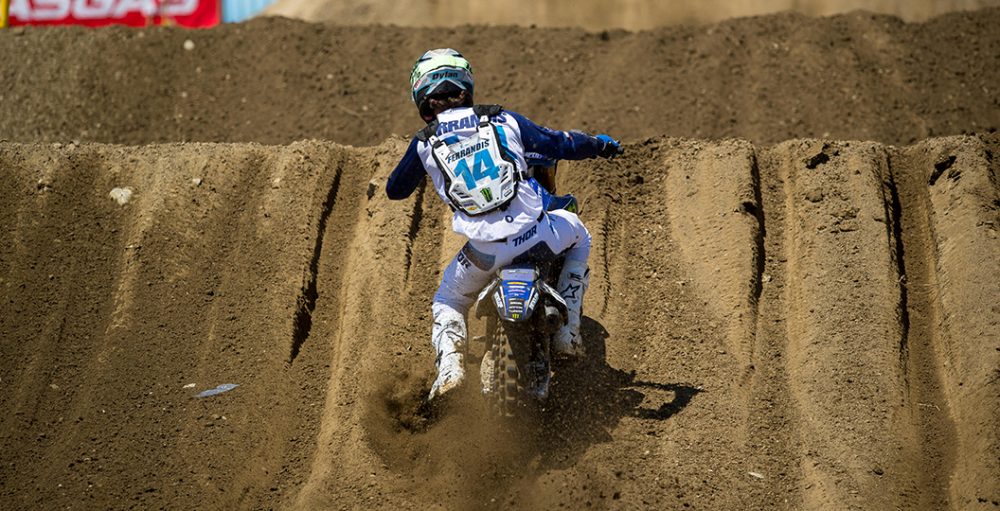 Dylan Ferrandis enjoyed an extremely successful 250F career and even secured a podium finish in his rookie 450SX season in 2021 Monster Energy Supercross. Pundits still overlooked the Monster Energy Star Racing Yamaha rider heading into 2021 Lucas Oil Pro Motocross – a discipline that comes much more naturally to him – though. Ferrandis rocketed to an impressive win in moto one and was arguably more impressive in moto two, as he climbed from eighth on lap one to third at the chequered flag.

Now, armed with newfound confidence and a red plate, Ferrandis is a contender for the premier-class title. Does that change his outlook at all heading into the remaining eleven rounds? That question was pitched to him in the post-race press conference, as well as some additional talking points. Most noteworthy is the fact that he blames bike set-up for the lack of success, by his standards, in supercross. It seems as though he chased that sweet spot through the first four months of the year and finally found it when it came time to switch to the outdoors.

You are the first guy since Ryan Villopoto to win in his 450MX debut and you looked like the same Dylan who was on a 250F last year. Did you expect this out of yourself at round one? How are you feeling moving forward?

I did not really expect that. I never thought that I would leave the track with the red plate and leading the championship when I woke up this morning. It was kind of a surprise, but at the same time after the supercross we put in the work. We spent a lot of time working on the bike and off of it. Yeah, I just gave everything I had today. It worked out well for me. Winning round one as a rookie, like you said, is amazing. It was such a great feeling. I do not know – I just felt good today and gave everything. A good start in moto one helped a lot, but I had a bad start in moto two and had to come back through the field. I passed some really strong riders all day, so I was really proud of that. Now, for sure, leading in the championship is a different position. Next week I will have the red plate, so it is going to be a something to manage. I was in that position last year – I will give it everything and we will see what happens.

That was really a fantastic ride. Now that you have the red plate, does it change your game plan at all going into round two? Do you just keep going with what you had heading into round one?

No, it is always the same. Round two I will try my best and see what we have got after the weekend. This 450MX field is so gnarly with so many past champions in the top five, ten or twelve. Even the top twelve! Anything can happen. It is going to be normal for many riders to have a bad day and then be off of the podium sometimes. We will see – I am going to try the best that I can, yeah, and try to hold onto the red plate for sure.

What was the reaction like from the Star Racing team when you got back? It was obviously a big result for those guys and everybody in your corner as well.

I think that it was big relief for all of the Yamaha people. They have been looking for that win for a long time now and giving them that at round one was really important. I think everybody just had this relief of, “Okay. Now we got one win and we are back on the top spot.” I think that was the reaction for everybody and maybe also some… They were also happy to have put so much work in for everybody on the team and me. I am quite hard on the people in my team to have the best bike, always do more, always test more and put a lot of hours in on the track. I think I have been pretty hard on them the last four weeks and maybe over the last five seasons also. Yeah, I think that it was big relief that they could see that all of the hard work and hours we spent testing have finally paid off.

I think my podium in supercross was just… I was in the right spot at the right moment. The track on that day was so different than normal and I just figured out how to ride that track at Houston 2. I made that podium and then after that I just felt like my bike set-up was the biggest problem. That is why we worked all supercross season to make the bike better. Now, in motocross, I feel like we had more time to get ready and more time with the bikes. We proved it today by having two Yamaha bikes on the podium. I just think Houston was some circumstances and was maybe a little bit of luck. It was just a good day for me and after that I could not find my way onto the podium. I feel like today was different – I was on the podium in two motos instead of just one race in supercross. I already proved it twice. I am just going to try every weekend and if it does not happen… I mean, I also understand. The field is so wild. Nobody can be on the box every weekend this season.

Did you know that Chase [Sexton] was that close to you at the finish of the first moto, when you guys came down to the last section together?

No, not really. I was trying to manage the gap. I knew we had between three and four seconds. I made some mistakes with lappers on the last lap and lost some time. When I was on the last straightaway before the finish, I saw that he was there and was surprised a little bit. In the last lap I really missed too much time with the lappers, like I said, with mistakes and bad lines. It was kind of my fault a little bit. I was really surprised and did not want to lose that moto. I mean, I was still a little bit disappointed to finish with him so close to me. If I did not win then I would have been so mad, for sure.