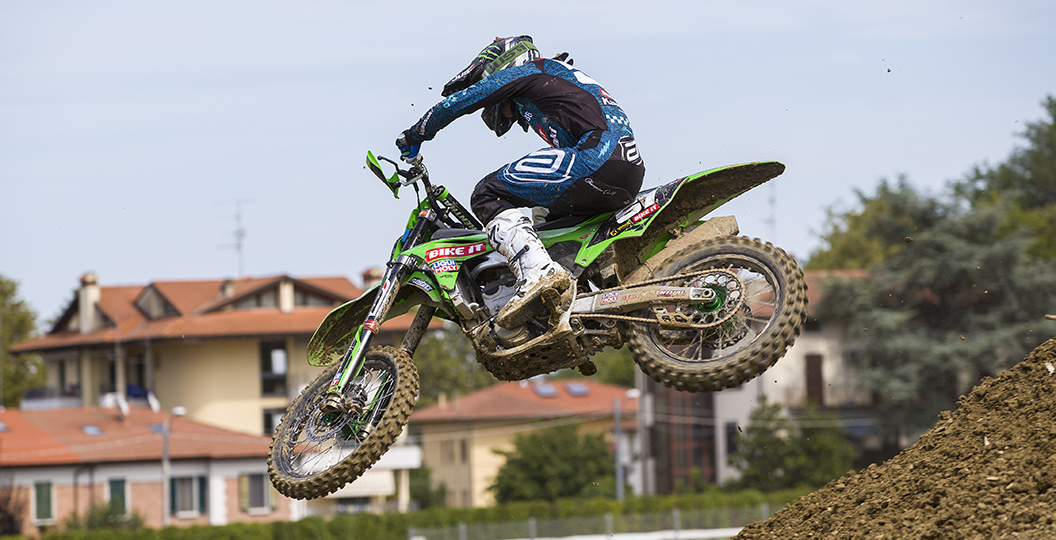 Darian Sanayei is on the up, as he has now had two positive rides in a row and appears to be making leaps forward in his fight against the aftereffects of the Epstein-Barr virus. The results do not even truly reflect just how well he rode! Sanayei discusses that, silly season, plans for next year and so much in this exclusive MX Vice interview from the Grand Prix of Italy.

MX Vice: After Lommel, which was good, we obviously had some questions about whether it was going to continue, because Russia was kind of a false start. This was actually better. I feel like it was all good apart from obviously the DNF in the first one, but still. Speed, pace and fitness… It all seemed positive. You are going places.

Darian Sanayei: Yeah, definitely. This weekend was a pretty big step in the right direction. I actually could ride these last couple weeks. I didn’t feel too bad, so I already knew that it was going to be better this weekend. How good? I didn’t really know. I was practicing in the week and I saw a couple other guys that were in MXGP class and MX2 and my speed is pretty good. I knew it was going to be alright. Yesterday was super good to go fourth in time practice.

I got fourth in the qualifying race to get a decent finish. It definitely feels good. Today I got a good start and then actually passing [Jorge] Prado in the second corner was sick. Got to lead a couple laps. In that first race, a bearing or something broke in my wheel. We didn’t know at the beginning. I lost my rear brake on the second lap. I was like, “Dang. How am I supposed to ride this track jumping all those jumps and those tight corners?”

I kind of just figured out, “Okay, I just use the gears and shift down.” I started riding smooth. I was definitely a couple seconds off the pace, but it wasn’t too bad. I was ninth on the last lap and the wheel ended up breaking completely. It locked up and I was like, “Damn. I rode the whole race. It has to do it right at the end.” It was okay. Second race, not as good of a start. I was twelfth or thirteenth around the first corner and caught up to eighth, which was okay.

Taking the lead in that first moto, it was sick at the time but do you kind of feel like it was the worst thing to happen? You start getting excited and worrying too much about keeping the lead? Had you started third and just settled into that, maybe you could have established yourself a bit more?

Yeah, not so much. Sometimes when I led before for sure, but this weekend I didn’t really care how long I was going to last. I was just going to try to do my best. I think it was good. When you can lead, I think it’s always better. When Prado messed up a little bit coming into that second corner, I definitely in my head was like, “Should I just make the move right now or should I just chill behind him?” I was like, “Screw that. I’m going to make the move.”

It definitely seems like in the MX2 class Prado has it pretty covered and nobody can really give him a run for his money. I was just kind of joking with my friend before the race like, “If I was fit, maybe?” Coulda, woulda, shoulda. I was like, “Maybe I can for a couple laps?” I did, so that was cool.

Are you sat on the line now just feeling way more confident instead of thinking, “Who knows what is going to happen?” Are you sat there going, “Okay, this is good? I can actually do this.”

Yes and no. You never really know. Every race you never know exactly where you are going to stack up or what’s going to happen. You got nerves and everything. Yesterday I definitely felt better. After pushing yesterday and getting pretty worn out and going in the red for the whole qualifying race, I definitely didn’t feel too good last night and this morning. It’s so hot outside. I didn’t know how good I was going to do, but I just kind of made it simple. Like, “Hey, it’s riding a dirtbike. I know how to execute my start and I know how to ride, so I’m just going to do that for however long I can.”

Obviously first time here. On a scale of one to ten, how much did you love it?

I thought it was going to be a little bit better, the soil and stuff. They definitely watered the crap out of it. I was like, “Dang, dude!” When we went out in the practice and I was watching, there was like standing water in every rut. I was like, “What’s going on?” I definitely like tracks like this. The jumps, the tighter corners and everything like that. Not supercross but it has a little supercross feel to it. I think I excel on tracks like that.

The last time we spoke, we mentioned silly season and you said you kind of had a little plan mapped out. Things are changing constantly, so you are just playing the game I guess?

Yeah. Things are changing, just not in my favour. I wanted to try to get a good result here to maybe push something in America, but if you look at the results a DNF-8 is not very good. I feel like the results don’t show my progress that I had this weekend and that I can run up front. I’m just going to keep focusing on me and keep pushing all the situations, then we’ll see what happens.

Last thing, Puerto Rico. You in or not? They have got one rider… I feel like it’s a bit weird that they have not got two other riders.

Yeah, it’s definitely strange. I’m kind of just up to what the team and everything wants to do. I kind of want to do those Euro supercross races, so it doesn’t really give me too much time. The Puerto Rico team manager emailed me last week and he said, “Alright, just final prep for Assen. Which class do you want to ride, MXGP or MX2?” I’m like, “Dang. I don’t even know if I’m doing it. I have got to ask Steve [Dixon].” I don’t know. It’s still kind of up in the air. I would like to do it. I would like to race. It would be fun. Justin Cooper is coming over… I think it would be cool to race with him. At that time, I think I should keep improving a little bit. We’ll just see.

Random question, but obviously west coast supercross is pretty easy as a privateer as far as travel costs go. Would you even consider something like that? Chucking a bike in a van and trying to get a fill-in ride or just prove yourself? Speaking of proving yourself, is Monster Energy Cup kind of a good place to do that?

I’ve thought about the west coast supercross thing. Worst-case scenario, what can I do? I think just the most important thing is making sure you have good equipment, good mechanics and stuff that I can actually go and perform with. You don’t want to come in half-ass. You only get one real first impression on supercross. I’ve thought about it, definitely, but I’m not sure if that’s one hundred percent what I would do.

Then Monster Cup, we have also talked a little bit about that too. The only problem is it’s only the one 450 class. It’s kind of a lot of work. I think only twenty-two guys or something qualify, so it’s kind of hard just to qualify. I feel like if I qualified and then I could ride in the race I would do pretty good, but it’s definitely just a different case scenario. We’re just going to focus on these last couple rounds and go from there.