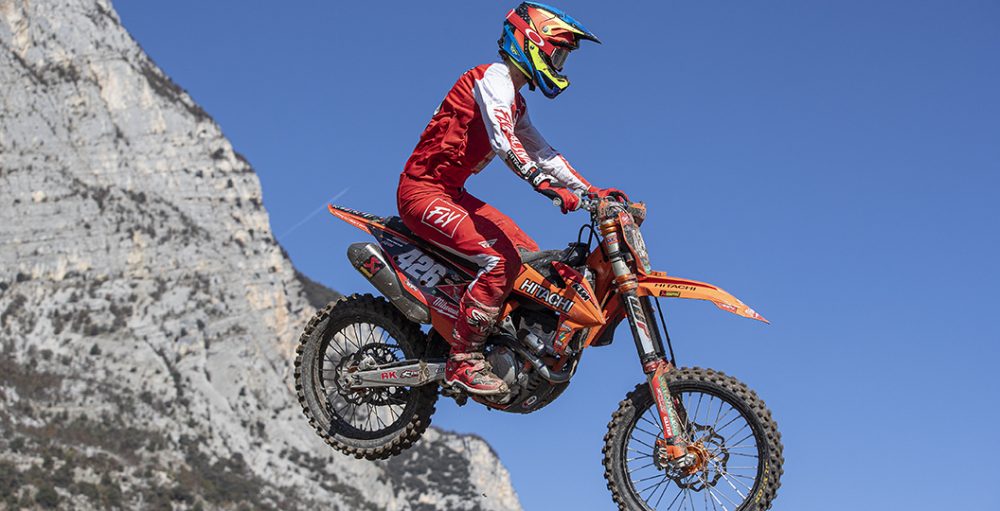 Conrad Mewse has had a turbulent time of it in the 2021 FIM Motocross World Championship, but reminded fans of what he is capable of at the recent Grand Prix of Pietramurata. Mewse ran some of the fastest times, chased a podium position and could have even won the overall. The problem is that he only ended up with as single point. A freak issue forced to withdraw from moto one and then a crash meant that he could only make it to twentieth in moto two.

Although the result was not ideal, positivity still ran through the Hitachi KTM fuelled by Milwaukee awning as the prospect of what is next is rather exciting. The Grand Prix contingent will be back at Pietramurata on Sunday, of course, so there is no reason why he cannot perform on a similar level. Mewse speaks about that in this MX Vice interview from the fifteenth race on Wednesday. This interview was first shared as a post-race podcast that was presented by the FLY Racing Formula helmet.

MX Vice: Great day. No one cares about the results. You were very fast and you had great starts. It sucks to say, but maybe you could have won the overall today. You were that good. It sucks, but Sunday cannot get here any quicker.

Conrad Mewse: Yeah, definitely. The first Sunday here was not amazing for me. I again struggled with starts, crashes and things like that. It was a bit difficult but we did a bit of testing between these two rounds and it made a world of difference today. I finally felt like myself again. I felt amazing. I had two good starts, which I have been dying for all year. It was a bit unlucky in the first race. It was a bit of a freak issue – it was not the team’s fault. It was just one of those things. I had another great start in the second one, was in fifth, and then went down on the first lap. It was just one of those days really. The guy who I was behind in the first race and on the back of, [Rene] Hofer, won the GP.

Yeah, you were faster than him in the first moto.

Yeah and he won the GP! I said that today could have been a podium day after the first race. Everyone was all over the place, you know. It was one of those days. I am just happy to feel like myself again, ride good and get two good starts. We still have three rounds left. There is nothing to say that a podium is not going to happen, especially now that I am feeling good again.

What have you tested since Sunday? Did it help with starts or on the track? What were you focused on?

Just getting the bike to be a bit more like myself, with the power of the bike to make me more comfortable around. I did not feel like I was really, really comfortable before this event. I felt like it really showed today. Not only on the starts, but on the track as well. I just felt great and especially in that first one. I felt really good. It was a shame about the crash in the second one, but it happens like I said. We definitely made a step forward for the event today.

What actually happened with the crash in the second race? I did not see it but you came around like miles behind everyone else.

Yeah, I crashed coming out of the tight bend on the upslope of the hill. Every time I picked the bike up, I kept slipping back down. I was in a blind spot too, so everyone was riding over the bike and I could not pick it up. When I did eventually pick it up, I got to the top of the hill and my bars were bent. I had to jump off and kick them straight again. I was a long way down. Like we said, the results do not really matter this weekend. It is not ideal for the team, obviously, but it is just nice to ride like myself and put myself in a good position for the last three rounds.

You mentioned the power of the bike. Are you a guy who wants more power or manageable power?

Less power for me! I like to be able to ride the bike rather than the bike taking me for a ride. That is how I like it. I would rather a bit of a slower bike that is controllable than a bike that I cannot ride like myself. That is just the way that I have grown up to like it – that is the way that it is kind of going towards now. It is just working with the team, together, to make these fine little changes. It is all about working as a team, exactly like I said.

This is starting to make sense now then, because you were insanely fast in the first sector in moto one. You were the fastest guy there. They did not change that at all, so I was wondering where that came from. I guess the bike was more rideable.

Yeah, definitely. The one place that I felt completely different today was in the corners. I felt so much more comfortable to come in, sit down and get the gas on early. I knew that the power was a bit tamer and it would not snatch out on me, if you understand what I am saying. Today was a massive, massive step forward and something that I have been after. I was not really sure of it for years though. I am just really happy for me and the whole team to be in this position going into these last few rounds.

Are you a good test rider?

I never thought I was. Well, I am obviously not. It took me years to find this out! I am not a very good test rider and I have my own way of explaining things. I think the team are starting to understand my take on it. I have never really been a good test rider, but we ride the bike all the time at the end of the day. We know how it feels and we know how we like a bike. It is important, the feedback that we give to the team and that they listen like they did.

We are back here on Sunday. They are not going to change the track too much. Are you going to ride between or just sit still and make sure nothing changes?

I am for sure not going to touch the set-up of the bike. I am just going to leave it how it is. I am going to ride on Friday, just to get some laps in and see if we can make a better step. This step that we made… It was the first time we tried it. Why not see if we can go even better?