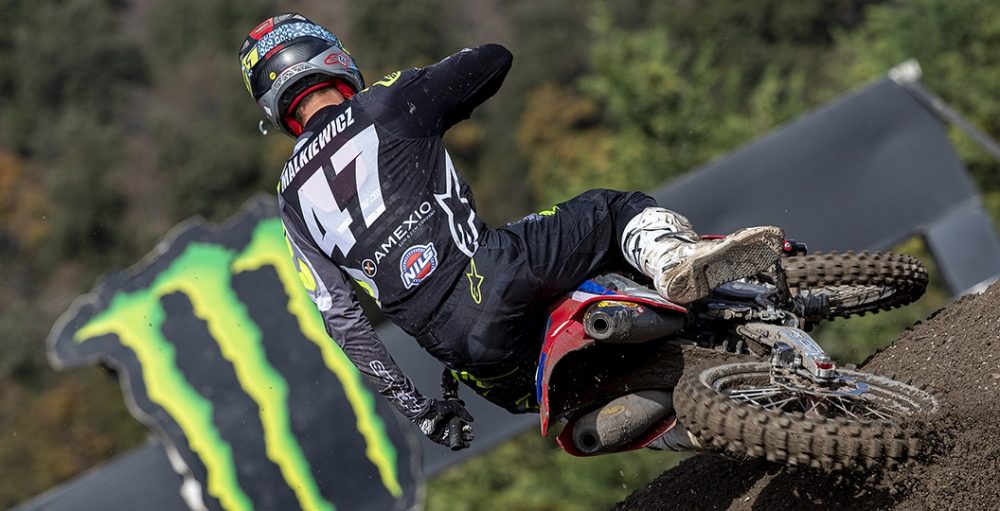 Honda 114 Motorsports’ Bailey Malkiewicz was unknown when the 2020 FIM Motocross World Championship  begun, but has now proven that he has a future on the world stage. A slow start raised some question marks, but it has now come to light that he tore his ACL days before the Grand Prix of Great Britain in February. That is not the only piece of information that came to light in this exclusive MX Vice interview, as it turns out that he has not yet received an offer for next year that will allow him to actually make a living. Malkiewicz tells all in this chat from the Grand Prix of Pietramurata.

MX Vice: I feel like today was the first time that you have had a chance to run in the top three and prove that you have the raw speed to do it. Hanging in there for as many laps you did proved a point. Overall, you must be stoked. I feel like this speed has been there for quite a while now and this was your moment to prove it.

Bailey Malkiewicz: Yeah. The speed has definitely been there, but it has just been the fitness. I’ve had a couple good starts this season, but then thrown them away pretty early on. Super pumped about being able to be top three for over half a moto and it was definitely a confidence booster. I definitely want to be doing that a lot more.

Has it been frustrating? It was a slow start to the season and Eric Sorby [rider trainer at Honda 114] told everyone why. The speed has been good lately though. Have you been banging your head against a wall a little bit?

No, not really. I think that I have been doing pretty good, for my first year over here, and I’m pretty happy with my results lately. I have just been getting better and better. When we first came over here, we were not fully in the right head space and we came back after the break as a new person. I am happy with how the second half of the season has gone. Very happy with my results, actually.

I cannot remember what Eric said, but it was something like you didn’t realise the work that it would take to contend in MX2. It was something along those lines. I’d imagine that, coming from thousands of miles away, it’d have been hard to fully focus on getting ready for this thing. There would have obviously been distractions, huh?

Yeah. Like I said, I was not in the right head space when we first came over to Europe. There were just so many things to figure out and learn with moving overseas at a young age, learning the culture and how it all is over here. I definitely could have been more professional with the way that I did things, but I’m happy with how I came back over and did it. I definitely was not making anything easy for myself for the first half.

What is it you have struggled with most since you have been here? The tracks, food or languages? All of the above?

I don’t know. I think the tracks a bit, but I’ve ridden them a couple of times when I did the Junior World stuff. I knew coming over here was going to be tough. I should have put my head down a bit harder and done the work a bit better, but unfortunately I tore my ACL in a pre-season race at the start of the year. I’ve been racing this whole year with a torn ACL. I’m set back for half a lap or more as soon as I knock it in a corner. It’s been a struggle all year, but not many people know that I do not have an ACL in my right leg. I’ve just been putting my head down, fighting through the pain and trying to get my results in to get a ride for next year.

Now I’m happy we are doing this interview, because I had no idea about the ACL. I guess it happened like two weeks before the opener, but has it been getting stronger every month? Is that how this works? I’m guessing it’s better now than it was at Matterley, but still not great?

Yeah. With Matterley, we were trying to figure out if we wanted to race or not a couple days beforehand. I really wanted to race this year and luckily we did, because of that break. My knee was nowhere near in good enough shape to be able to ride two motos at a good pace. It’s getting better, but it’s not going to get any better without surgery. I don’t have full movement. Like I said, as soon as I knock it or twist it I could be out for a week. A couple  of weeks ago I had a practice crash and could not move my leg for like a week. It’s not good, but we are doing the best we can with it. Hopefully we can get it fixed once we finish the season and get ready for the next one.

The season ends on Sunday, so do you have to get it fixed immediately? Is there a chance that you could race with a torn ACL again in 2021? Some riders go through their entire career without an ACL.

The plan is to try to get it done as soon as possible. We do not know where or when. If we cannot get it done, then we will definitely race without getting it done. You can still do a good race without it, like you said, but it just makes it all a lot harder. We would have to do a lot of work on it and make it stronger. Surgery would be the way to go, but if not then we are fine with having to race with it for one more year.

Going into 2021, you do not have a deal sorted. I wasn’t sure if your results were good enough to get a deal at the start of the season, truthfully, but now that I know about your ACL I feel bad. You have shown that you have the potential to do it here and all of that stuff though. You deserve a deal, so where is that situation at?

Honestly, my manager and I have had a fair few teams actually message me to get in contact. We have looked at everything and messaged people. Unfortunately, it’s not enough to keep me over here to be able to live. I am thankful to the people for reaching out and noticing me, but with COVID and everything I do not think they have enough stuff for me to be able to live for the year. I can do the racing stuff fine, but I don’t have enough money to stay here.

Have you been comfortable living this year then? Has the deal this year been fine or have you already sacrificed a lot and just cannot do it again in 2021?

At the start of the year it was slow-going with getting everything sorted, but everything was fine once we got back over here. I’m fine now. This deal’s sweet and I’m loving it. Definitely, like I said, those deals are with great teams but the offers that I got were not good enough for me to be able to live here and race.

You cannot come back to this team then, I guess? Is this one of the places where the offer just doesn’t make sense?

I have not got anything from this team yet, unfortunately. I don’t know. With what you were saying before, I wasn’t in the best shape with my ACL at the start of the year. We saw that I could hardly last ten minutes when we came back in Latvia, so to get to where we are now… I would say we are a lot fitter. We have not been able to do gym work the last couple of weeks, because we have been traveling so much. I am just doing as much as I can to stay where I am. My fitness is not the best. I could still last all moto, but it’s tough out there when you are in the top three and pushing every single edge of the track.

The latest results have been really good, I think. Definitely enough to be able to make some people realise that I can be up there every weekend. It would definitely get better and better too. My manager and I have a three-year plan. The plan was to get consistent top fifteens this year, which we have been doing lately and that is very good. The goal next year would be to get in the top ten and top five at every round. The goal for the third year was to chase a championship. We don’t know what could happen next year. We don’t know. Our goal is definitely to chase the championship in 2022 though.

Let’s make one thing clear to everyone listening. When you say the teams aren’t offering you enough to live, you are not looking for a mansion and all of that… You are just saying that you need the bare essentials, like food and a roof.

Yeah, exactly. Living over here is not the cheapest, especially when you are coming over with your family. My Dad is staying with me at the moment. I’m not asking for a big house or so much money. I’m just asking for enough to get me through the year and not have to spend all my money just so I can stay here.

Let’s end on this note then. 2021 is up in the air. You want to be here though. There’s no doubt in your mind that you want to be in this series. Going back to Australia would be a disaster in your mind, huh?

Yeah, exactly. I really want to be here. That’s why we are over here. It’s been the dream since I was a kid. I still am a kid, but since I was younger. Going back home would really suck, with the racing side of things, but going back home to see family and friends is awesome. I also have family and friends over here. Going back would really suck and it is not really what I want to do with my career though. The racing over here is a whole different level. It’s definitely where everyone wants to be. Definitely really want to be here.