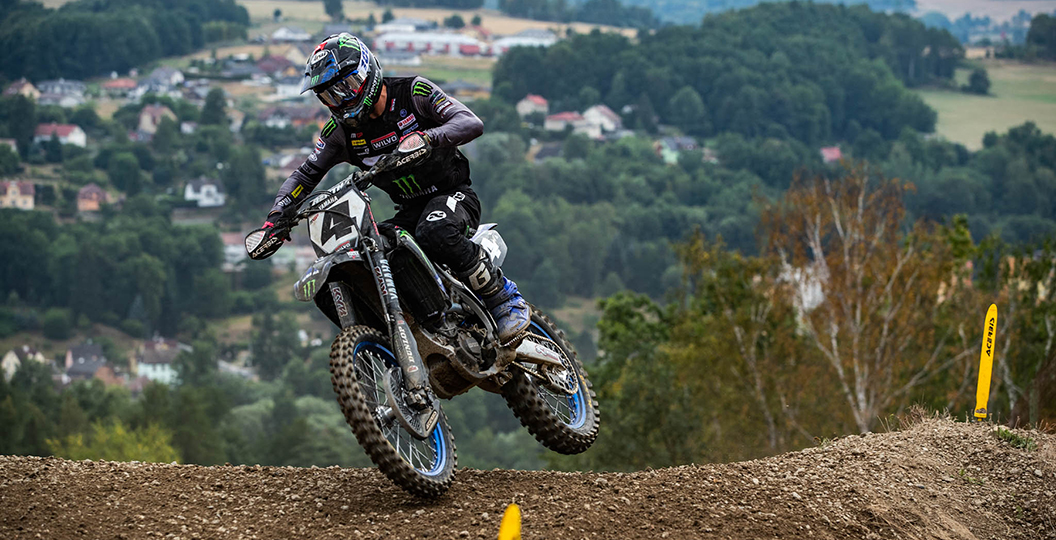 Arnaud Tonus didn’t stand on the podium at the Grand Prix of Czechia, which was actually quite surprising. There were still a few positives to pull from the thirteenth round of the current campaign, however, especially considering the difficulties that he has encountered since the trip to Indonesia. Time is running out to capture that elusive overall win though, so the pressure is mounting with five rounds left to run.

MX Vice: A positive weekend, I would say. A bit up and down, especially compared to what you are used to now, but the fact that you came on so strong in the second one ended it on a high note.

Arnaud Tonus: Yeah. It was definitely a better second moto for me. I was sick coming back from Indonesia. I got a bacterium infection there, so it was not easy. I was in bed for a week, so it was pretty tough. I could not train, really, so it was good to salvage some points this weekend and end up healthy with a solid second moto. It’s pretty positive.

Was there any particular reason why you struggled in the first one or was it just a bad start? Let’s be honest, no one was really charging forward out there.

Well, it was a mix. My start was not good but also my rhythm was not great. Then as soon as I caught a bad rhythm, I made a mistake and lost a few positions again. It made it tough on myself. Other than that, like you said, it was hard to really make passes, so let’s say I ended the moto like I could and had a better second one with a better start. Until the end I think it was pretty tight with everybody. Happy to end up like this.

Did you actually make any bike changes or anything between motos to help or was it just literally just a better start and better track position?

Yeah, exactly. I haven’t changed anything on the bike. I felt quite good with it, with my set-up, so it was more about just putting myself back in the situation. Good start and from there it was a lot easier to keep the rhythm. Physically it was pretty tough, because of the sickness and everything. I wasn’t really in the best shape. It was more about holding on and trying to stay where I was than really doing a big charge, because I didn’t have much energy to do it.

I feel like every week that I speak to you, you say you don’t really make bike changes. Are you quite low maintenance with that? Does your silky-smooth style help?

We did a few changes, let’s say, compared to Semarang. There we were quite far away with the set-up. There it was just super strange. We went to a direction that I never really went before. My set-ups are very, very close each and every weekend other than that. It means that it is a good set-up when you do not need to go that far. I think on a motocross bike you do a few changes here and there, but if you find your base you don’t go too far away from that.

You mentioned that you were in bed all of the week after Indonesia. Did you actually get any training time in this week?

I rode one time, but I was not feeling great. I rode one time on Wednesday and that was just to try to break in my body a little bit. It just happens. You have some weekends like this where you have to deal with sickness or a bit of up-and-down stuff. It’s a part of it.

I’m guessing that whilst dealing with the sickness and not being one hundred percent, you were thinking about Lommel coming up and how you would quite like to be at your best for that one. You do not want to struggle around there.

Yeah, for sure. You want to come there fit, so it is good that I went through this weekend healthy. Now focusing on recovering and coming solid next weekend.

Obviously, you did not race here last year but you have got plenty of time in on this place. They added a few little rollers and little doubles this weekend. Did it make it better? Did it open up more passing opportunities?

I don’t think so. I think it broke down the rhythm a bit, so with myself it didn’t really help. It was so hard to make passes and stuff. I think the track was really rough compared to previous years to me. I never remember Loket being that rough. It was good for the races, but it made it tough on us.

That was actually going to be my next question. Every rider I’ve spoken to has said this is the roughest Loket they have ever seen. Do you feel like they prepped it differently or anything like that? I do not really feel like they did anything to make it rough.

Yeah, it’s strange. We walked the track on Friday and thought it was going to be hard-pack. It looked super dry and they did not water so much at that time. Somehow it became that rough. I don’t know where it came from, to be honest. I never expected it to be like that. I was thinking it was going to be more hard-pack. The base is still hard. There were many berms, ruts and sharp bumps. It was quite technical.

Finally, just to get people excited, are we still on to reveal the changes that you made at the end of the season? I will leave it until then, but can we get people a bit excited?

Do you think they really get excited about that?

People are quite excited. We have kind of built this up for, like, two months now. I feel like I have tried to guess every single week, so let’s build it up.

If you build it up, let’s make a cool story about it at the end of the season and we can make an interview around it. That will be cool.