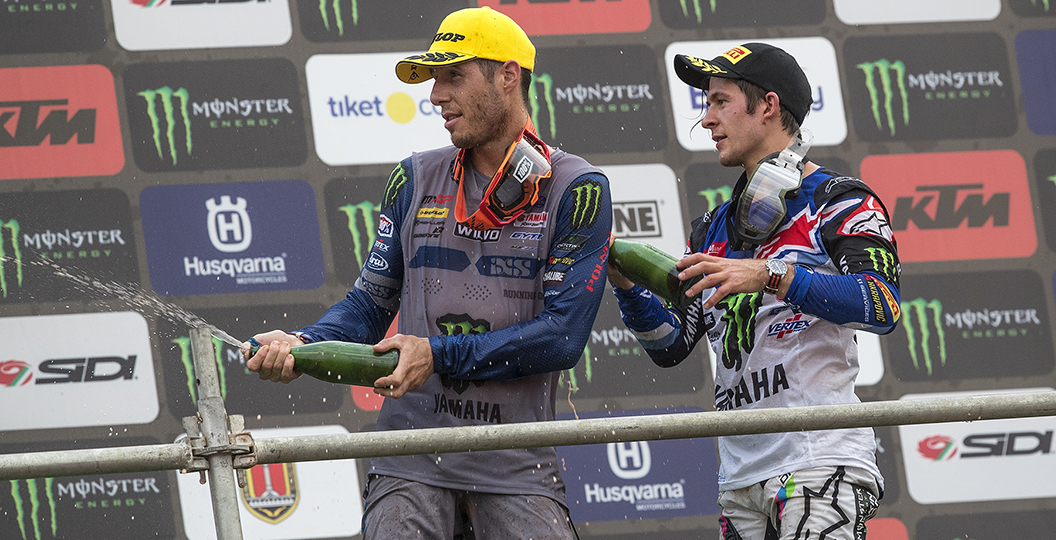 Arnaud Tonus returned to the Grand Prix podium at the Asian fixture over the weekend, which was the sixth time this term that he has sprayed champagne. Tonus, who is heavily linked to a seat at Yamaha again in 2020, mastered the blue groove of Semarang and made progress in each moto, which was not exactly the norm. Tonus broke down that impressive showing and more hot topics in this exclusive MX Vice interview from the track.

MX Vice: Back on the podium! Second overall. Always better than third. Business as usual for you. Last weekend was clearly just a blip, so I guess recovering from that was the biggest thing?

Arnaud Tonus: Yeah, exactly. It’s super good to rebound after a tough weekend and a tough Saturday too. It was hard for me to get a feeling on this track. We changed a lot of things on the bike actually, from yesterday to today, and I felt a lot better in the warm-up and going into the race. It is great to find solutions as a team when it is not going easy. It’s good to rebound like that.

I was impressed by just how much you charged forward in each moto. No one was really making too much progress, but you were really moving forward each time. Did you have something special out there or were even you surprised that you were able to do that?

No, I think I really accepted the way that I couldn’t go forward too quick and really had to build it step-by-step. I built it up really myself from the beginning of the race. It was not like I could make a move here and there. It was just detail-by-detail. I think that was the key, not rushing it. I actually rushed it a little bit in the second moto and went off the track, so I lost a position to Pauls [Jonass]. I had to fight back from it. It was such a hard balance to find between not rushing it too much and still going forward.

It’s funny. Ever since you mentioned that you did something mental, which led to this turnaround, I feel like I pick out a little bit of what you were talking about every time you speak. Like not rushing it, not overthinking it, taking your time and not getting stressed out. That is obviously a big thing for you.

Yeah, it is. I think it is deeper than whatever you think of. You might have a few things, but it is a little bit deeper than that. Anyway, I just try to adapt every weekend. This weekend was very special. I never had that kind of set-up on my bike anywhere so far. It was far from everything we are used to, so it is cool to have a podium in those conditions.

Obviously, this is your first time here. I guess you watched it last year or at least saw something about it. Did it meet expectations? Did you expect it to be like this? Was it better or worse?

No, I didn’t expect it to be like this. I was talking with Tim [Gajser] actually on the podium and he said it was more sketchy than last year. I don’t know if the Indonesian guys were riding last year or not, but it seemed like it was a lot of riders on the track and it packed it even more. It was really a struggle for them to keep some moisture [in the dirt]. It was mainly super hard-pack and felt like ice. It was hard to ride.

Not really, actually. Germany was tough in the qualifying race, but my lap times were really good. I was two times second, I think. The speed was there. Yesterday even in timed practice I pushed, but I couldn’t find… I think I was two and a half seconds off. I was quite far. It was the whole day like this. Germany was a bit special. I crashed in the qualifying race. I finished fourteenth, but I had the pace. This weekend was a bit different. I had to really go the other direction with the bike and make some real changes.

Last weekend was tough. For that reason, I was watching you a little closer this weekend. You had an amazing podium run before, which was incredible, but momentum was on your side then, which obviously makes it easier. This was the first time you had to rebound from a tough weekend in that stretch and put yourself back on the podium. I was interested to see you do that. That must have been a big thing for you as well, because I’m sure deep down you had similar questions?

Of course, when you are in a momentum you are not really thinking about it and stuff seems to go your way. Rebounding from a DNF, it is not easy. Landing on second place overall, it is even better. I am super happy with that. With the team, we really stick together through those tough times. You can easily not be happy, but we try to learn from our mistakes and grow as a team.

Everyone hung out in Indonesia this week. No one had a choice. A lot of people chose Bali, but you being a different guy ended up in Singapore of all places. How the hell did that come about? I saw an Instagram story and I genuinely pulled up a map, because I was like, “How the hell has he gone there?”

Actually, it was not really my choice. It was more Louis [Vosters]’ choice. The whole team was there. It was more of a gift for the team, because we had a great season so far. He chose the best hotel in Singapore. The highest point in the world, it is like 200-something meters high and you have the pool on top. The hotel was just amazing. The whole team was there, so we enjoyed our time. It was super cool. Just a gift from Louis. It was a good time.

Ready to go home now? Ready to get back to normality?

Yeah. I was not ready to adapt yourself to these conditions, especially with the food and the heat. Actually, Singapore was great. The food was really, really close to Europe and I could really recover well and felt that my digestion was a lot better. In Indonesia you can eat chicken and rice, but it does not feel the same somehow. I don’t know what is going on. I’m looking forward to having some good food from Marie at home, seeing the family and everything.