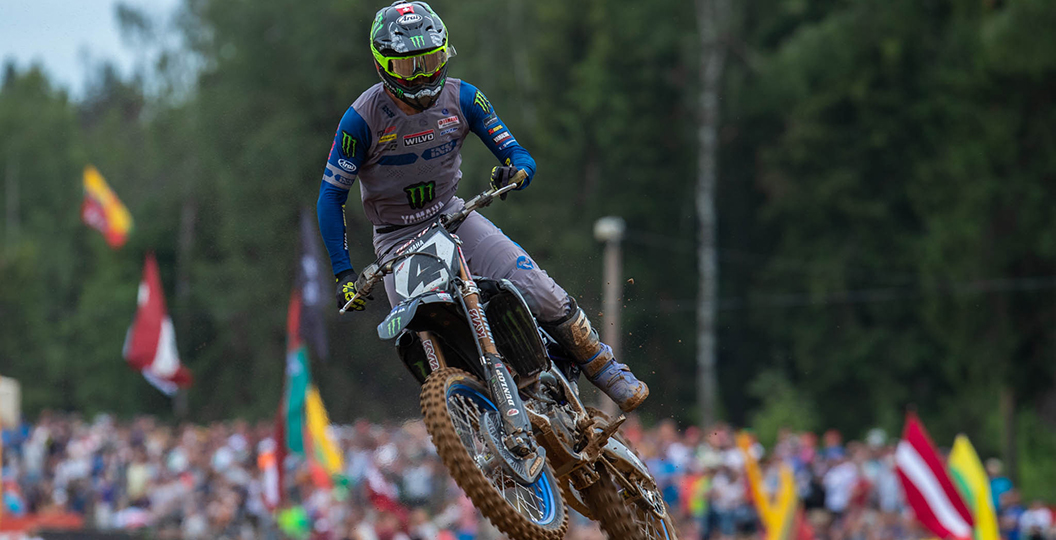 Arnaud Tonus cannot be stopped! Yet another podium finish, his fourth in succession, was acquired in Latvia over the weekend and left him in a spot to challenge for a bronze medal in the premier-class points. It is crazy how he has transformed as a rider since the beginning the season and, after knocking on the door a couple of times, light was finally shed on that topic in this exclusive MX Vice interview from the Grand Prix of Latvia.

MX Vice: We keep waiting for the streak to stop. It is not stopping, so I guess podiums all the way from now on! It seems like that is going to happen for you in sand, on a sketchy track or on hard-pack. Wherever we are, you can be on the box.

Arnaud Tonus: Actually, it is good that you mention it. It is really a type of track that makes it even more special, because these conditions are not really what I grew up on. It is a good step. I am super happy. I think the first three… Well, Portugal is also a bit like tricky and sandy. France and Russia are definitely more my type of tracks though, so I am super happy to make it happen here in Latvia.

I was saying before the race that, looking back to 2017 here, you had a massive crash. This place has not been kind to you. If there was a place where you would maybe not be on your game, you would think it would be here.

Yeah, that is true. I did not really come with that mental attitude, let’s say. I was more like trying to take this race as a gift and give everything I have. It seems like we are good. I was feeling pretty good all weekend. I had a good qualifying race. Anyway, to make it happen on Sunday is another story. I am really happy.

A lot of people maybe forget this, but this is effectively only your second season on a 450F. Comparing you to a rider like [Jeremy] Seewer, and maybe you should be looked at in the same category, makes this even more impressive. This is happening quite quickly for you now.

Yeah, you are right actually. Last year I was off the whole year so, like you said, second year on a 450F. Actually, I am twenty-eight soon. It is my birthday tomorrow. I almost forgot it. I am going to be twenty-eight tomorrow. I had some years of injury and tough times, so it is really good to rebound. It is hard to even believe it. When I look back to where I was a year ago, I was not even sure if I could ride a dirt bike because my shoulder was completely destroyed. It is amazing.

Obviously leading the first moto, that was the first time in a while you have properly led a race. Did arm pump set in at all? Was it hard to kind of manage the way that you were thinking about things? Did you get caught up in the situation a little bit?

Of course. Like you said, it has been a while, so for a few laps I was a bit tied up and I could really put my attention back on the track and loosen up a bit. I think I had a small gap, like two seconds. I felt a bit better. Jeffrey [Herlings] was coming back at the end with some hard charges. I still had to learn and grow to get this way. I hope I can make it happen soon.

Did it help you once Jeffrey passed you in the first race? Did you suddenly get a chance to breathe a little bit and see what he was doing differently? I did notice you picked it back up a little bit.

Not really because, when he passed me, he put up a higher pace to try to make the gap that last two laps. I was not really learning. I was just giving everything I had. It was a tough battle. I still kept close and I was trying hard to pass him back, but he was on it and he won the race.

What about the second moto? Frustrating at all? You were obviously in a position to win the overall. I thought it was definitely going to happen. It was kind of a race where you went forwards, backwards, forwards and backwards.

Yeah. I missed a bit of energy at the end, to be honest. I do not know if it is the battle in the first moto where I gave a lot of energy. I do not know. I was not able to come back on Jeremy [Seewer]. He had a little gap with [Tim] Gajser. I did a small mistake at the end when Romain [Febvre] passed me. Like you said, it was a bit of a shame to be that close to the win and not make it happen. I am still on the box, so it is amazing, but it was a bit tougher in the second moto, I would say.

This streak has been going for a while now. If you look back to your first podium in Portugal, would you say that now one month on you are a much better rider than then? Although the results are quite similar, do you feel like you are growing a lot in this time?

Yeah, for sure. I think I am growing as a rider and on different track conditions. Here I think it is a really good step for me, so it is really cool. I am learning to be up front early and deal with pressure from the guys behind. It is a situation that I am not really used to. I won a moto in Switzerland, but to be up front every weekend is a different type of pressure. I am learning for sure and I am growing as a rider.

I know I have asked you this before, but people keep asking me and they want to know. Is there anything that led to this turnaround before Portugal? Anything you can think of? Anything you did differently? Did anything happen to make this happen?

Yeah. I think something happened, but I am not sure I am able to speak about it right now. I have been working a lot on the mental part for years and years. It seems like I figured out some stuff. Might be a time where I will talk about it, but not right now.

You cannot say what it was exactly, but can you say whether it was mental or bike set-up? Just that. Nothing else.

Probably mental, because I have not changed anything on the bike.

Now we know! There have been a lot of seconds and a lot of thirds. An overall win, is that your goal for the rest of the season?

I have no expectation or goals or things like that. I am really focusing on what I am doing right now, trying to enjoy the process and give everything I have. That is the mentality I have.