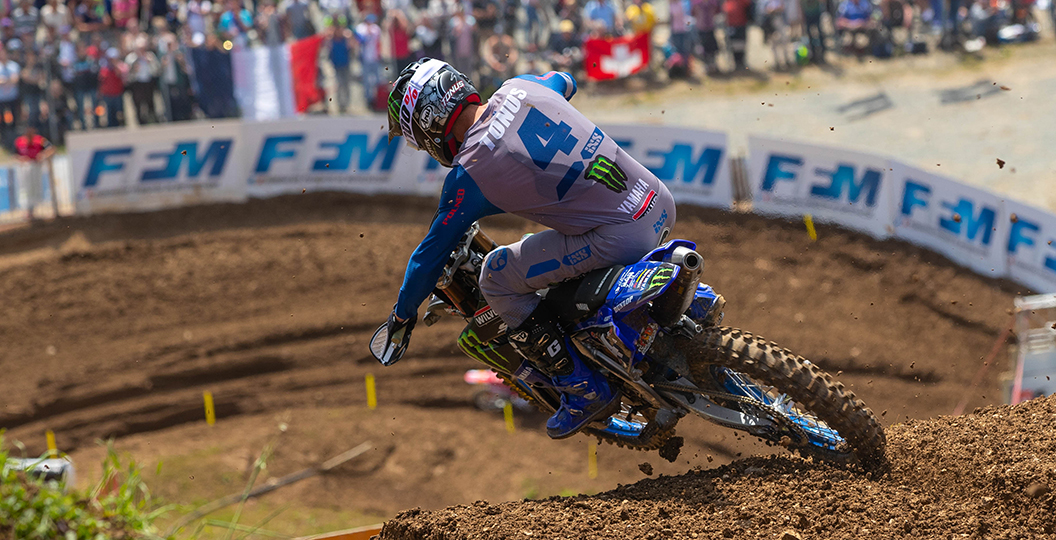 Arnaud Tonus had a horrific start to the 2019 FIM Motocross World Championship, as he simply could not string two motos together. That fact makes his recent surge even more impressive, as he has put a streak of third-place finishes together and added two more trips to the premier-class podium to his list of achievements. What contributed to this drastic turnaround? Everything is explained in this exclusive MX Vice interview.

MX Vice: Suddenly you are like a different guy. You are nailing every start and every lap. It looks like you are now on another level, both with your riding and confidence. When was the last time you felt this good?

Arnaud Tonus: I think the last time I felt this good was 2014, when I was consistently on the podium and feeling like I was in that flow. It has been a long time. I’m very happy. I’m thankful for everything. I will just keep trying to keep the ball rolling.

It seemed like a perfect weekend. Did anything actually go wrong? Was there anything you struggled with? Just run through it.

Yeah, just stones. I got a big stone on the second moto, a big impact here [chest]. It was painful, but I guess everybody went through this kind of problem this weekend. I had good starts and, like you said, everything clicked pretty well. I am so happy. I just enjoy those moments. Looking forward to the next GP.

You were in a great position each time. Is there any element of disappointment that you didn’t hold on for the win at all? Did you think at one point that you maybe had it?

I just thought about passing Romain [Febvre]. I was trying to during the motos. He was faster on some parts and I was better on others, but at one moment I just felt like I also had solid motos. I didn’t over-risk anything. My goal was to pass him, for sure, but for the rest, it was solid. It was good riding. The speed was there. I had fun on the bike. It is super cool. The crowd was on it, because Romain was in front of me. I felt like I carried that energy from the crowd. Even if it was not me, it was pretty cool. They looked pumped, so I went through. It was cool.

Two podiums in a row. It was obvious last week just how much it meant to you. Does this one mean even more in a way? Doing it once is great. Doing it two times in a row is like making a point that you are here to stay.

To be honest, at the moment I do not really realize everything that is going on right now. Like you said, the first podium was huge emotion and probably a bigger impact, to be honest, but now that it keeps going it’s hard to realise. I’m so happy and thankful for everything. Just going to enjoy this moment.

Have you made any changes that have led to this charge forwards? In the break, did you find something with the bike? Did anything change to prompt this?

No. On the bike we haven’t changed anything. I’m very happy with what I have. I just feel like mentally it was a big step and I’ve been working on this part for a while. It seems like I understand some stuff lately and it’s paying off, so I’m super happy.

Do you think maybe at the beginning of the season you were riding a bit cautious, because you knew that you couldn’t get injured? You didn’t want to put yourself in that situation? Do you think that is wearing off now?

For sure, even if I wasn’t thinking about it consciously. When you go through those kinds of injuries, it’s here. You are a little bit tight and scared. It is not great for the confidence, but it’s a part of the sport and I’m happy I overcame all this. Right now, I’m getting back on a confident level.

Do you now feel like you are in a position where you can win one of these things or do you feel like you need to make another little step up to get to that point?

I think it was close this weekend. Tim [Gajser] was for sure a little bit faster than us, but it was a smaller gap than we used to have. Seems like Tony [Cairoli] and Tim were really on another level. The last two GPs I think we all came closer though. On my side, I felt like I was pretty close. It’s more on the details now. I think we can make it happen.