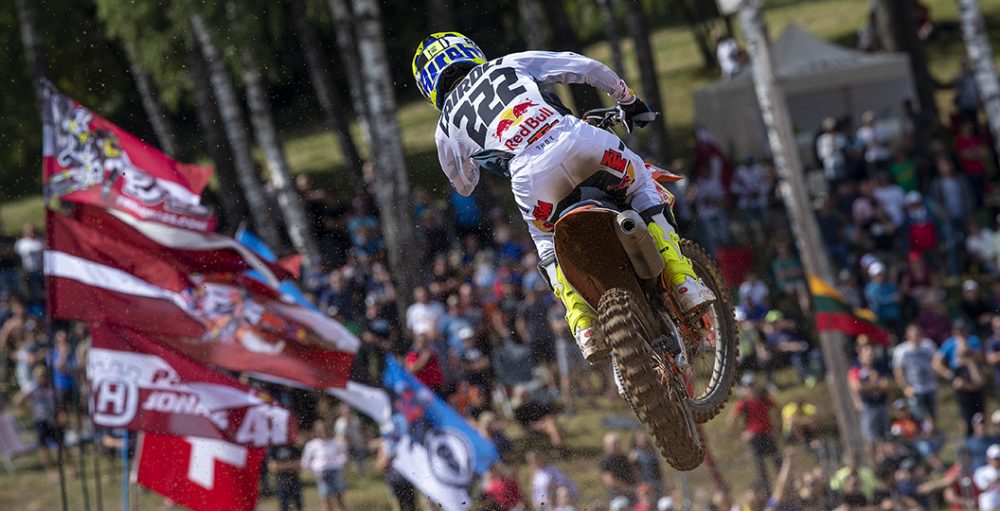 Antonio Cairoli had another consistent day at the Grand Prix of Latvia, round seven of the 2021 FIM Motocross World Championship, but it could have been so much better. Cairoli had the speed to take the win in the shallow sand, but poor starts and minor mistakes hurt his final ranking. There were still so many positives to pull from the event and those are touched on in this exclusive MX Vice interview from the venue. 18 points separate him from the current series leader entering the summer break.

Starts are referenced in this interview and that’s actually a very interesting topic. Cairoli’s had an average starting position of fourth through seven rounds, which does not sound too bad. The fact that he’s only started in the top three in one of the last eight motos is worth noting though. Perhaps that has something to do with qualifying; he has only qualified in the top three at one of the last four rounds too. There is no doubt that better starts would aid his cause.

MX Vice: I guess you are not happy, because you could have won today. You probably would have won that first moto, had you started up front. The crash in the second moto probably pissed you off as well. The speed was good though!

Antonio Cairoli: Yeah, for sure! The speed was good, also time practice was okay this morning with fourth place. Normally I am not so good in time practice. It was positive, of course. A positive day. I was third in the first moto, after a not-so-good start also. Touching with Jeffrey [Herlings] out of the gate. Luckily, I was on the inside and could sneak in fifth or sixth. I spent a lot of energy trying to pass some guys, because the speed was not so different between riders. You had to really attack the track everywhere. I was quite tired after the first moto.

Another not-so-good start in the second moto, I touched with Jeffrey again and then with [Romain] Febvre. I was around sixth or seventh place in the first or second corner, then I was fourth at the end of the first lap. I was very pumped with that. It was good and everything was working perfect. I was trying to pass Febvre, I think, on the table after the waves. I went outside and wanted to cut inside, but I went too fast and lost the front. I crashed. I lost many positions there, like six or seven places. I went back to tenth or eleventh.

The rain came after that and then it was difficult to pass. The track had sketchy edges everywhere. It was not very easy to come through the pack either. Some guys made mistakes, and I could take the chance to go to sixth place. Not what we wanted, for sure, because the speed was there. We know that on this track I can do a better race than what I did today. The championship is still okay. We are all quite close – my goal is to stay there and enjoy this season how I am now without any pressure.

It was difficult to make up time out there. Everyone was running a similar pace, but you were one of the only guys moving forward in moto one. You did it the best, including that nice little battle with [Jorge] Prado. That is another positive to take from the day.

Yeah, exactly. Not many people made passes. I made a few! This was okay. If you want to go for the overall nowadays then you need to be in front at the start. It is so important. We saw it with Jorge in the second moto – he stayed in front easy and was riding very nice without taking any risks. If you are struggling and crash or get a bad start, then it is very difficult to come through the pack. Everybody has a good pace.

I was a bit disappointed to see that they had kept the layout from the third Latvian race last year. I think that the newest section is quite one-lined. What did you think?

Yeah, I think that the old track had some more flow and places to make up time. Now they keep this layout, which could be good too. I think that they just made it too tiny in some places. They have the space to make it a little bit bigger. If they make less jumps and less waves, then the track would be wide open and easier for making passes. Now everyone is going straight to make the jumps or waves… Everybody is riding really scared when it gets sketchy. I think that with less obstacles it would be a better track.

I don’t know, actually. We are going to go to some very hot races in Turkey, with hot weather, and a hard-pack track too. We are going to try and move to Italy now to ride some hard pack with nice temperatures. We have been in Belgium for the last month and a half, and it has only been under 20 [degrees celsius] with rain. We need to dry our bones a little bit with the humidity to be ready for the next hot races.

I have got to ask every rider this, because there will be announcements in this month off. It sounds like the Motocross of Nations will not count for points. How do you feel about that? If you race the ‘Nations, then that would be seven race weekends in a row. Everyone needs that weekend off. This is a really good shot for Team Italy to win though, and on home soil too!

Yeah, it is a very difficult situation with the ‘Nations. If it was now, in this break, then you could maybe think to do it. You have to be ready for so many races in a row, then with the ‘Nations inside. You want to go for the win, because if we go then we go for the win. We have such a great team now. [Alessandro] Lupino was in the top ten in both races today, which is very good for him, then I am on good form and Mattia [Guadagnini] is showing good speed. It could be a good year, but it is very difficult.