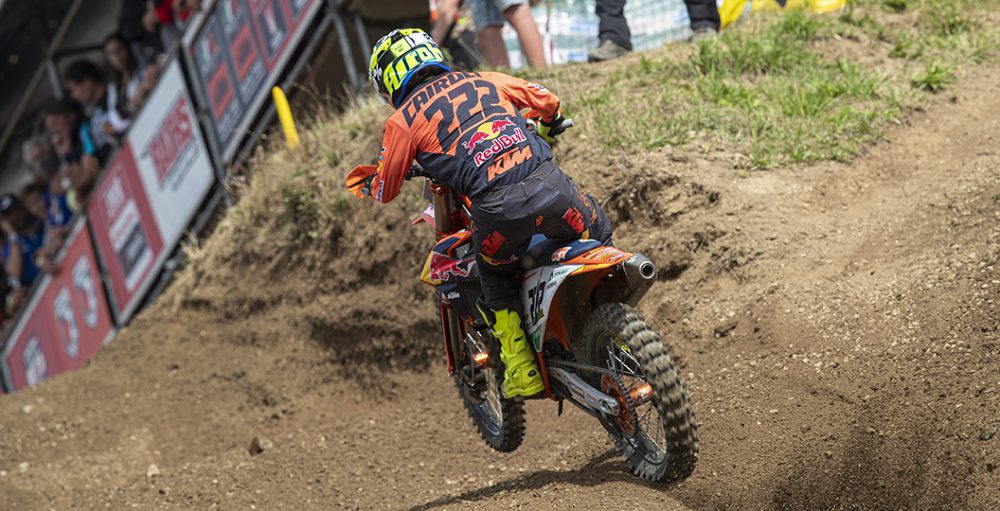 Antonio Cairoli made a huge step forward at round five of the 2021 FIM Motocross World Championship, despite the fact that Loket is one of his least favourite tracks on the schedule. That’s actually broken down in detail in this  MX Vice interview from the Grand Prix of Czechia, as well as what could be done to make these tracks better for passing. That has certainly been a hot topic through the first five rounds.

A 6-1 scorecard left Cairoli second overall at the Grand Prix – he also cut the deficit to Tim Gajser down to just 11 points. Loket was a significant turning point in the series. Interestingly, Cairoli won his 181st moto on Sunday and mounted the overall podium for the 176th time. Bonkers. The MX Vice interview below was originally posted as a post-race podcast (presented by the FLY Racing Formula helmet) on all major platforms.

MX Vice: This is kind of becoming your thing. A so-so first moto, but then you came out swinging in the second moto. A good day and you were on the box. I am guessing that you feel like the first moto was another missed opportunity though.

Antonio Cairoli: I am happy because my goal is to always be on the podium. This goal is going well. I always struggle to find the flow a little bit in the first moto and be in race mode immediately. I must work this thing out a little bit. If I do not have a good start then I struggle a little bit to get in a race rhythm and make passes, so I need to work on this a little bit. Hopefully we can sort this problem soon and try to be more aggressive in the first moto.

Do you think that is something to do with the one-day format? If it was still two days, with a qualifying race, then do you think that you would be more revved up for day two?

No, I think that… I like the one-day format. We discussed this already. Saturday is nice, but it is another race and start. It is another risk, and we already have so many races. Maybe if Saturday was there with just free practice and then time practice then it would be okay. I do not like the race on Saturday, so I think that it is good having the format with a one-day race. I just need to work a little bit on my reactions in the first half of the race.

Did you make any changes between motos, with bike set-up?

No, the only change that I made was the starting position compared to the first moto. I was the sixth or seventh gate from the inside in the first moto. There was something wrong with the gate. The jump was good and then the gate bounced, so I lost momentum in the first part of the start. I changed for a better gate in the second moto, and it worked. I was there with second place off the start before I passed Jorge [Prado] immediately. I tried to stay in front.

You have been coming here forever and it has always been difficult to pass. They are still making little changes that make it harder to pass though. You drop down after pit lane and come back up to that little step up. They made it like a split section, so you could not square guys off, and that was the one place that everyone was using to make moves every other year.

The problem is that the people who work on the track are good with machines, but they do not have the view of how to make a track good for passing. You miss that part of the thing. The organisation needs to have someone who knows more about racing and has maybe been a racer in the past. They build stuff, like this, but it is not really working. The little step up before pit lane too, no one really used it all weekend. Everybody is passing on the other two metres of track and it gets very sketchy. I think that part should work a little bit better.

I am really good friends with Rui – he is working with me now. He could control the track during the race weekend, but he did not have the power to put a jump here and not there. The track was much better, for sure, because he made them flatten some parts that were dangerous. Now they just flatten whatever they think is dangerous, even if it is not, and leave other places. You have the waves after the start, then the corner before the part on top where [Tim] Gajser crashed. That part was just destroyed – they should have fixed that better. There are a few things that they should do better. The past years with Rui were good, but there needs to be somebody who comes to the track before and builds a proper track.

What is Rui doing with you then? You said he is working with you. I have noticed him around…

Yeah, he is working with me! He is just checking lines and helping me with some training during the race weekend, then he is also coming to some races. Not all, because he has his own schedule.

He is doing Baja today, isn’t he?

Yeah, he is doing Rally and he did Dakar last year. He is going to do Dakar this year too, so he has to do some testing for his brand. He is busy some weeks – most of them he is coming to help me out.

Last thing. We are going into Lommel now, which has been your house for many years. Looking forward to that, right?

Yeah, looking forward. I have started to enjoy hard pack tracks more than sand lately, but I think that is because I am not training as much as I used to in the sand. I would be in Lommel for six months before, whereas now it is one or two months maximum. You lose the technique a little bit if you do not ride there all the time, but it is still a very nice track.