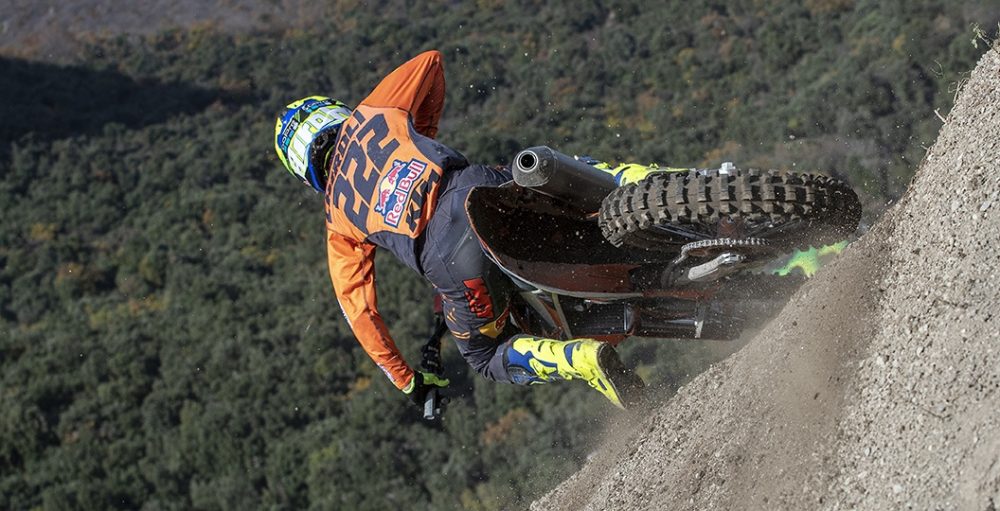 Antonio Cairoli had a tricky time of it in the 2020 FIM Motocross World Championship and ultimately fell short of his primary goal, which was to clinch his tenth world title. The week at Lommel, in Belgium, was disappointing for the Red Bull KTM Factory Racing star, but it turns out that the knee has become even more of a problem. Cairoli goes into detail about the injury in this, as well as dropping some interesting hints at what the future holds.

MX Vice: It has been a while and a lot has happened since we last did an interview. Firstly, on today, you were just never in a position to do what you are capable of. Start wasn’t great in the first moto. Start was actually really good in the second moto, but you went off the track and that was that. Thoughts on your day? What actually happened in that second moto?

Antonio Cairoli: Yeah, actually this round wasn’t my best. With the knee problem and the track this morning, with the sun very low, I was struggling a lot to make time. We ended up bad with our position [Ed Note: Cairoli qualified in seventeenth]. The start in the first moto, in both races actually, was not so good. I was about ninth or tenth, so I could make some passes, but not much, because the track is also very difficult to pass on. I was like sixth and [Jeremy] Seewer was third. I was watching a little bit for the championship. Okay, second place.

Second or third does not really change much, for me, only bonus-wise, but does not really change much. If you are not winning then for me it’s already lost. Going into the second moto we were only one point apart. I said, “I need to start in front with this kind of track.” I had a very good jump and almost a holeshot. Just before the corner I saw a blue fender coming my way. I got hit from the back and my shift lever was completely off. I went off the track and tried to go back on, but I was in twenty-fifth and almost last.

With that problem… You cannot ride on this track with the second gear. It was too dangerous – so many sketchy jumps. We just gave up. Unfortunately, that’s not what we do normally. I have ridden with so many problems, but this time it was impossible. Seewer was also in front. We weren’t often on a high this year, but with my knee problem it’s actually a relief now. I can fix it and see if next year we can solve this problem and go for the last attack to the title, because we always ride for the win. That is not what we did in the last part of the season.

You mentioned something there that I kind of thought would be the situation with you and Jeremy too, actually. You want to be world champ. The bonus money is nice, with second or third, but whether you have got a silver medal or a bronze one, I guess it doesn’t really mean too much to you?

Yeah, exactly. It was not really pressure for me. Only bonuses. I never cared about money, so for me the most important thing is be healthy and be safe on the track. We tried to get a better start in the second moto. I tried to stay in front of him, but it didn’t work. It’s racing. We try to move on and try to fix this problem. Hopefully we can be back on a stronger level next year.

We haven’t spoken since Mantova, so has the knee gotten a lot worse since then? Is it still just the same level of pain, but the wear and tear with so many races has gotten to it?

No. After Mantova actually we had some treatment and it didn’t work immediately, but after Lommel (before I arrived at the first race here) it was actually feeling the best this year. It only lasted for one race because, when I won here at the first round in Trentino, I put it down a couple of times in the race and nothing happened, because I didn’t feel it. The day after there was liquid and fluid inside. I had to stay with my leg up all week – I had to ice again all the week, so it’s been a lot of trouble. We didn’t really solve the problem. We just covered for a little bit. Let’s say for ten days I felt better, but then it got worse again.

Is surgery on the cards now then? Do you know yet?

No, we don’t know about the treatment yet. For sure we had some investigation already. It’s not easy, because the problem is quite difficult to solve. I’ve seen already three or four doctors. It’s not really clear. We need more investigation.

It sounds like we are going to start at the beginning of April, so that’s five months. That’s good news to you, huh, because you can take the time and speak to more doctors? You can try to figure out what the right thing to do is, and hopefully come into round one at your best.

Yeah, that’s my goal, because otherwise it’s going to be difficult. If not one hundred percent, I want to be close to there. I think that this year I’ve been riding at 60%, especially with the last part of the racing.

What do you think about your season as a whole? It’s kind of been a tale of two halves, because you were going strong and right in the title fight up until the end of Mantova. Since then it has tailed off a bit. Ignoring the results and the bronze medal, are you happy with how things have gone at all?

Let’s say that during the first part of the season, with the two rounds we did Matterley and Valkenswaard, I was not ready at all with my shoulder. I was riding again at 60% or maybe even 50%, whatever. We managed to stay on a good result though. The lockdown was, of course for me, good, because I could resolve the problem on my shoulder. Now it doesn’t bother me at all. I started to work, because I couldn’t ride with the bike, so I started to work on more physio with running and whatever. My knee got worse though. The problem was this. I’m not satisfied, because I wanted to end the season fighting at least and not just be conserving to try and save second place. It doesn’t really count for anything for me. I didn’t really like the last part of the season. I didn’t enjoy it.

Clement has obviously called it a career now. Just talk about any memorable seasons or races you have. Is there anything that stands out between you two?

Yeah. Clement has been one of my toughest contenders, also physically because I’m not a physical rider. I don’t like to hit somebody – he was quite strong. We had good battles and quite good contact also. It was always with respect and with a mind that you go hard, but you know where to go hard and enter. I was always respectful with him and he was with me. I really enjoyed riding with him. When he won the moto last week, it was nice because I remembered a lot of battles together.