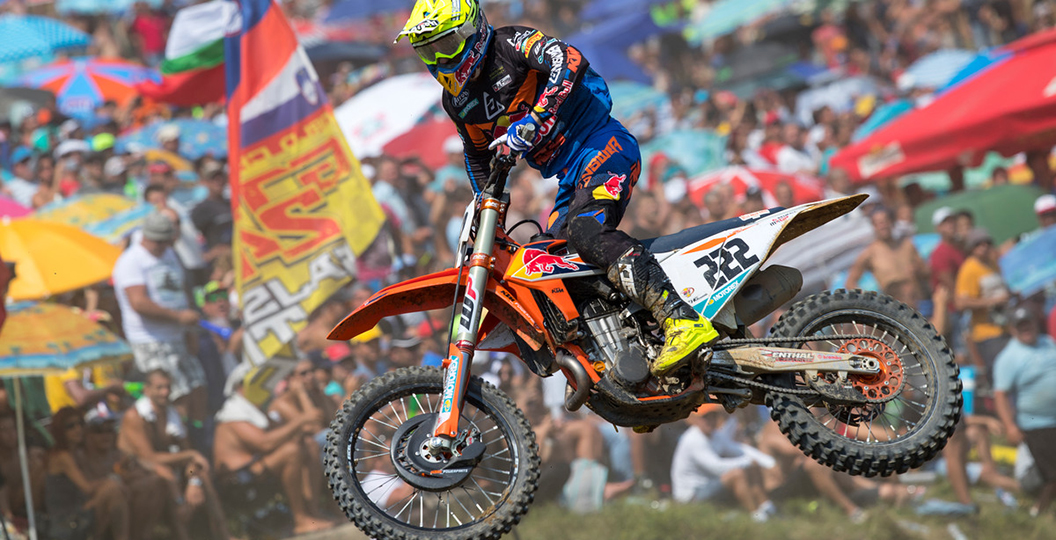 Antonio Cairoli had a difficult week, following a crash at the Grand Prix of Switzerland that left him with a knee injury, but salvaged some solid points in Bulgaria on Sunday. The title may seem as though it is slipping away at this point in the season, but the reigning champion is determined to keep on pushing until the final chequered flag waves at Imola in September.

MX Vice: This is a situation that you have been in a lot this year; coming in with an injury, not sure what to expect and just going to try to do your best. Yet again, all things considered, I think it was pretty solid. The start hurt you in the first one, obviously, but you clearly had the pace to get some solid points.

Antonio Cairoli: Yeah. It was a really difficult week, because the knee bothers me a lot. It is unstable, it is full of fluid and I do not have the whole movement of my leg. I cannot bend. I am really struggling with the first laps actually, especially on that first moto. I got a good start and then the track was a little bit wet. They put a little bit of water in some corners. I was too careful on these two corners and I dropped back to sixth or seventh already on the first lap, then before the waves section [Max] Anstie just crashed in front of me. I took his bike and I almost crashed also, so I dropped back to fourteenth or fifteenth.

I tried to come as quick as possible, but this track, like I said, is an easy track and everybody is fast. For passing it is very difficult. I do not have the full motivation with my knee. I cannot really attack so much the track. That is why I could only come until eighth, which was not for sure what I expected. Considering the week, considering the bad start, the first lap with this and that it is okay. Second moto I know I had to take a better start and I did it. I had a holeshot and a good ride, then down the hill again I slipped. I put down the feet. I needed to close the throttle and then Jeffrey [Herlings] had a free spot to pass me.

I was riding quite well, so I could follow his lines, then in some sections I was faster and some other sections he was a little bit faster. We rode quite nice all the moto, good laps. Always quite same lap times and we pulled away from Tim [Gajser], so it was okay. I am really happy. I need to be closer to him all the motos. That was my plan. When I am there I know I can follow. I just made some training now, because it is already after Indonesia that I am not training how I want. The last five or seven minutes I was a little bit tired, so he could pull a little bit away, but I am happy for this second moto.

This was maybe the fastest Sevlievo we have seen. There were not many ruts or at least deep, technical ruts. I am sure that helped your knee, because if it was deep going down the hills that would have been a nightmare. Then it also hurt you in the first race, because it made it harder to come through. Was it all a help? Did it hurt you? What did you think of the track?

Actually, it is not really one of my favourite tracks. I did not really have many wins on this track, but because like I said it is very difficult if you have a bad start. You cannot really come, compared with other tracks where with the technique you can come a little bit closer. Now everybody is fast and it is very difficult to pass. It is very not one of my favourite tracks, but overall, like I said, first moto should be better. I was not on the podium again. It was a good overall weekend because, considering my week, I am happy that I could ride and happy I could make it to good points.

You have obviously had a lot of injuries this year. Your thumb and your knee before this one. Is this the worst you have felt or have the other injuries been a little worse than this?

No, I think the thumb was bothering me more. It was always painful all the moto. The knee is just [painful] in a couple of places of the track where I need to put a little bit of weight on the peg or when I slip away, so I have to put the feet down. I think the thumb was more bothering me, because I could not train also during the week. I can start maybe riding one time before Turkey, which will be I think Thursday. Now a little bit of rest. I need to take off the fluid from my knee, because it is swelling up, so I see my doctor on Tuesday, then take off the fluid and hopefully say to me, “Okay, you can ride” and hopefully we can build up another good three races.

There is no doubt that you will be finishing out the season then. I guess with the points it is not over until it is over?

No. For sure it is like I said a lot of times, Jeffrey for sure deserves the title because he is the fastest this year. It is just if he gets hurt. It is not really what we want to beat him. We were not prepared enough. I know where to work. I know we have the speed, but we have to keep the speed for thirty-five minutes. This is the most difficult thing. For next year we try to build up a better plan. But anyway, like I said, it is not over until it is finished, so we will see. Keep believing it.

What did you think when you were following Jeffrey in that second moto? Obviously, that was the first time you had managed to get close to him. Before that he had set some amazing lap times. Were you surprised by his pace? Were you surprised that with your knee you managed to keep it quite close for a little bit?

No, not really. I know we pulled away from Tim [Gajser] very quickly, so we were riding really fast. Like I said, I had some sections where I was faster and then he had some sections of the track where he was faster. It was really a little bit like a spring all the time. I did not know, because I was finished the energy already. After twenty-five minutes I was already not really one hundred percent anymore, so I did not really know.

Maybe if he made some mistakes I could come closer and try to pass him, but the last five minutes I was done. I was not really pushing too much anymore, so I was okay with the second place. Good points. We are second in the championship and we have to try to also look for the second place if it is possible, because there are always other riders in the back who want to come. It is not only watching in front at the moment. Just trying to control the standings.

Finally, I asked you the same question with the thumb. Is this knee going to stop you from going to RedBud? Is this something that will cause you to sit down and take some rest after the last round or are you in for Italy?

I do not know. We do not really have news at the moment for Italy, because I hurt myself and I do not know. I have to see my doctor in Belgium, who I did not see yet. I only saw my Italian doctor. He has to tell me if we need to do some stuff, because my meniscus is also not one hundred percent. I have to see if I have time to do the surgery after ‘Nations or if I need to stop immediately and try to heal up as quick as possible before next season.