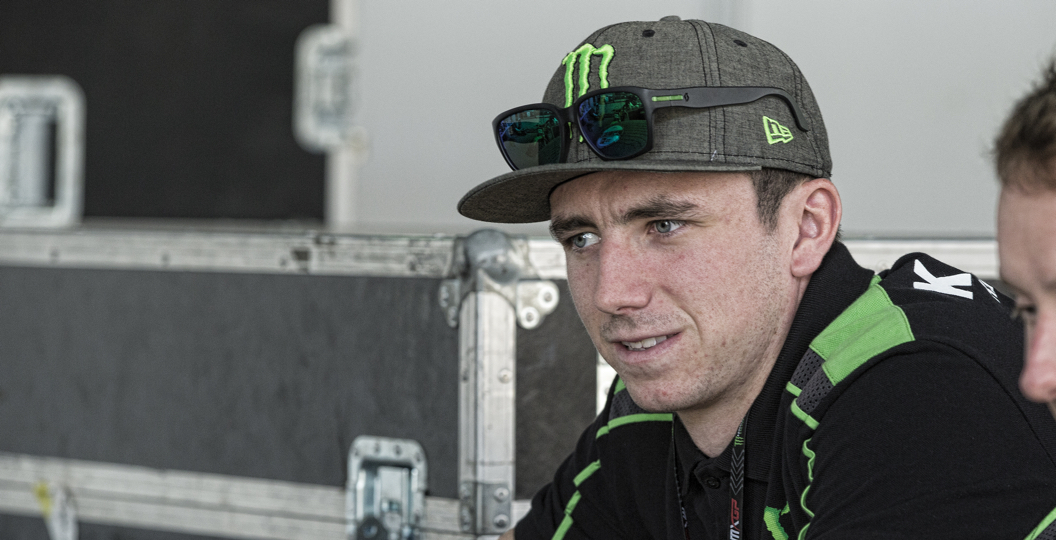 Adam Sterry, a former British champion, has been missing since April, because of a knee injury that was sustained at the Grand Prix of Europe. There was not much panic at that time, however, as he was locked into a three-year deal with Monster Energy KRT MX2 and had a home for the rest of his MX2 career. That programme is coming to an end though, if rumours are to be believed, so Sterry is working through the paddock in an attempt to find a deal for his final two years aboard a 250F.

MX Vice: Talk us through where you are now with the injury, what you have had done to get to this point and how the whole thing is going.

Adam Sterry: Since Valkenswaard, it has been about three and a half months. I had an operation. I had to wait a little bit for the swelling to go down, but not too long after Valkenswaard I had the operation. I had that done in Manchester. Harris and Ross – that is who is helping me with my physio. I’m there almost every day. Now I am in phase three of training, which is more training than physio. The knee is feeling better, so I have started cycling now. We are doing plyometric in the pool and just building the strength back up, so it is the same as the other leg. It is doing good and feeling strong.

The wrist injury that you had last year was the longest you have ever had off the bike, if I remember right. This amount of time off must have kind of hit you a bit hard?

Yeah, for sure. When I broke my wrist I think it was six weeks or something, so this is the longest I have ever had off a motorcycle. When I went and had it checked at the track at Valkenswaard, I was told that my ACL was fine and that I had just torn something small in the knee. When I went to see the knee surgeon on Monday in Manchester I was just expecting him to say that I had a little tear there, so would have to wait two more weeks and then I would be able to ride again. When you sit there with him and he says that you have done your ACL, both meniscus and a micro-fracture, so you’re going to be out for six months, it hits you in the face and you’re like, what am I going to do for six months?

It is kind of a weird one as well, right? It is not like you are in a cast and cannot move around or stuck in bed for a couple of weeks. You can get on with normal life?

Yeah, exactly. To be honest, now it feels almost normal. You would not be able to tell. It is just a little bit too weak to be able to ride. It is weird. I can do normal things. It is kind of like if you do your shoulder bad, then it is kind of the same thing. You can move your shoulder and stuff, but it is not strong enough to go back on the bike. That is how I would describe it.

It came at the worst time too, because obviously through the first few rounds you were getting to know the bike and still improving. Indonesia was really good, but then Valkenswaard looked like it was going to be the turning point. You were up there when you tagged that back wheel.

Yeah, for sure. We really struggled on the metal mesh to start with. We were finally just getting to grip with that and obviously the new bike. We had upgrades to add on later on in the year, so it was going to make more progress. When we finally got back to Valkenswaard, I really liked the sound of it. I felt like that was a turning point. It is a shame but that is what happens, isn’t it? It is motocross.

It obviously seems worse now, as you are in a position where you need to find a deal for next year. I guess it is tough, because you don’t really have results from this year to show people. Do you feel like people forget what you are capable of?

Yeah – that is it. It is hard to prove to someone what you are worth or to get a ride when you have been sat on the sofa at home watching. It is a difficult one. We’re speaking to a few people, so hopefully we can sort something out.

How did that whole thing come about? You had a multi-year deal, as far as I know. Did you see this coming? Have you been you left scrambling at the last minute? When did you find out exactly?

I don’t really want to comment too much on the team’s situation, but they let me know within enough time. I signed a three-year deal, but that is not now happening. The team is still good. They gave me everything that they promised. That is, unfortunately, how it ended, but hopefully we can sort something out.

Are you worried at all? Are things happening or is it kind of a bit quiet at the moment?

Things are happening. Again, it is slower. People don’t know too much about what’s going on or most people don’t know what’s happening yet either. It is a big waiting game at the moment. We’re making slow progress, so there is progress. Some progress is better than none.

You obviously always hear about bad news and everything. There have been a few rumors going around that you are going to have to start looking for a British-only deal. It is not going to come to that, is it? People are obviously still interested?

Yeah, I don’t think it will come to that. I think if it comes to something like that, we’ll try and do something ourselves and try and do what Dean [Wilson] did in the US.

Going back to the start of the year quickly, just talk about what it was like adapting to the Kawasaki. You obviously weren’t on a factory bike last year, but a KTM is great no matter what. It must have been a bit of an adjustment getting used to the Kawasaki, which is good in different ways?

The Kawasaki is really good, actually. I really like the handling of it. I have always been a massive fan of how the Japanese bikes handle. Obviously we have factory support, so there is a big budget there. That was it. The team had quite a big plan for the future. At the start, it was all looking good and then that’s it.

What were your goals for this year? I guess you wanted to get a podium? It wasn’t even really that far away when you got injured. You were in the top five and battling it out for those spots.

Yeah, for sure. The goal this year was podiums. Just show speed and battle for podiums each weekend. Indonesia, if we did not get suck in the mud in the first race, it could have quite easily been a podium, but that is motocross again. Then Valkenswaard was going well until I just put my leg out a little bit in the corner and the season was finished.

Is there one thing specifically that you miss about your KTM from last year or, the other way around, one thing you prefer on the Kawasaki?

Not really. I think they are both very good bikes. To start with, talking a few years ago, I felt like I struggled to turn the KTM as much, but both have progressed and both are very good bikes. The Kawasaki has really good handling – that is basically it.

You say that the knee feels pretty much normal now. Have you got a date for when you can start riding again? It is not going to hurt your preparation for next year, is it?

No. If anything, for next year we will be in a better position. I’ve already kind of had my off-season, so I’m already training for next year. My knee will be completely fine. Hopefully I can get back on the bike in November.

Obviously the injury ruled you out of the Motocross of Nations. However, from what I’ve seen, you were still on the short list. You were still involved in the discussions and even in the group chat that they have got going on. I guess that was quite a nice feeling to still be considered and valued like that?

Yeah, for sure. One of the worst parts about getting injured was that I wouldn’t be able to race in the ‘Nations. In Britain, in front of everybody, would have been a dream come true. That was one of the worst parts about getting injured, knowing that I didn’t have a chance. From everything that’s been happening in the group chat and what’s going to happen at the event, I can’t fault the way that Mark [Chamberlain] has organized it all. How professional he has gone about it by telling the riders, having meetings, discussing what needs to be better, what could be better and how we are going to do it is a really positive thing. I think for the ‘Nations, I think they have a very realistic shot of being on the podium.