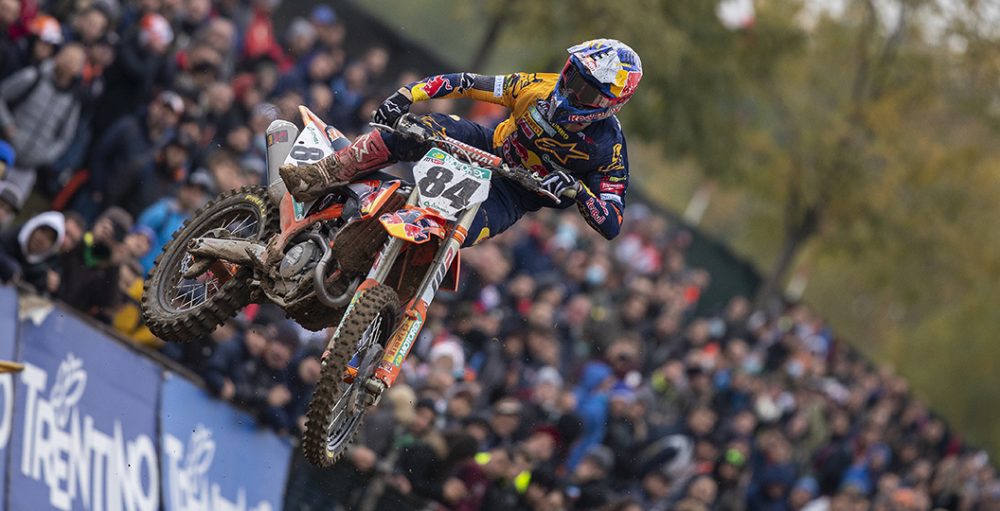 Jeffrey Herlings faced more adversity at the penultimate round of the 2021 FIM Motocross World Championship, the Grand Prix of Lombardia, as a crash on the first lap of moto one left him buried in the middle of the pack. Not only did he have to deal with that deficit, he also had a loose seat after Jeremy Seewer jumped into his bike. The crash was unfortunate, sure, but he was lucky that he was able to continue and eventually secure second place.

Seewer offered an interesting rundown of how the incident unfolded to MX Vice following the Grand Prix. “I could not do anything,” he confirmed. “I landed on him, sandwiched him. I had a quick decision to make: The moment that I saw him crashing, I could have sent it and jumped over him. The thing is, for me, it seemed 50/50 that he could save it. If he would have saved it and I had sent it then I would have just launched into him. My bike was on his, so I clearly had to go first. He tried to do something and I was like, “F**k! I try to take my bike now.” I was quite nice lifting it over his, because I could have just clutched it and destroyed his seat. I didn’t… I’m a nice guy.”

Seewer recovered to fifth in the moto, whereas Herlings got to second. Herlings went on to win moto two and the overall, so ensured that he did not lose any points to his title rival at the Grand Prix of Lombardia. The three-point deficit stands with one round to go, however, so Herlings must leapfrog Romain Febvre to clinch the MXGP title. Incidents like the one with Seewer simply cannot happen at the Grand Prix of Citta di Mantova.