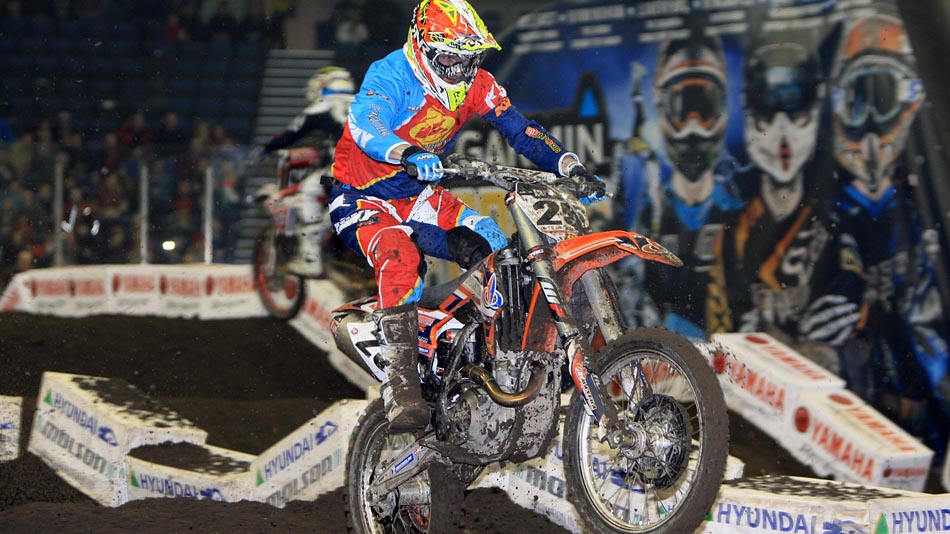 Victorious start to the Arenacross Series for Dyer and Butler

This past weekend saw the Garmin Arenacross UK series roll into the Belfast Odyssey Arena for the opening two rounds of the 2014 season. Dyer and Butler KTM arrived at Belfast looking to produce some solid results.

After all the excitement of the opening ceremony it was time for the racing to begin. The format for the Arenacross series consisted of qualification via two heat races per rider or the dreaded LCQ for the final two spots.

With the track surface being softer than normal, riding smooth was vital on the rutted course. In the heat races both riders transferred directly to the main event. Steven Clarke produced two strong rides for 4th and 2nd places respectively, while Jamie Law rode to two 5th places, even following a heavy last lap crash in the whoops in the second heat.

Next up it was time for the Main Event and as the gate dropped Clarke fired his KTM in the lead in turn one. Meanwhile Jamie started in the middle of the pack but unfortunately collided with another rider and remounted to finish in 12th place. Clarke withstood the pressure from Rombaut first and then from Whatley at the finish to take the victory and the series lead after the first round.

Saturday morning saw a revised track layout to learn before the heat races. With a full house for the Saturday night show, Clarke started the night where he finished the night before by winning the first heat and a fourth in the second heat. During the heats Jamie produced to solid results of fourth and sixth to transfer to the main.

Before the main it was time for the Head to Head which saw Steven progress into the Final. Unfortunately in the Head to Head final Steven slipped off the bike in one of the corners and had to make do with second place and 3 vital championship points.

The final race of the Saturday evening was the Main Event and yet again Steven Clarke pulled off an impressive holeshot into the whoops section, while Law got tagged by another at the end of the whoops and crashed. Law was able to recover well during the race to finish in 8th place. Just like on Friday night Clarke rode a superb race at the front until the closing laps when Frenchman Fabien Izoird closed in and passed Clarke after a small mistake, but Clarke responded to retake the lead but crashed in the process. Luckily Clarke was able to remount and finish in second place.

After the opening two rounds of the series Clarke sits in second place, just 1 point behind leader Izoird, while in 10th place in the points is Jamie Law who will be looking to improve at the third round in Birmingham.

Steven Clarke – it has been a very good weekend for me, I took the win in the opening round and then finished second in the second round. I thought that I win in the bag on the second night but I made a mistake and Izoird passed me and then I tried to pass him in the next corner and clipped the haybales and went down, but I was able to remount and finish in second. I’m happy and healthy and looking forward to the next round and trying to take the points lead.

Jamie Law – It’s been a good two rounds for me, I came here to transfer into the Main Event both nights and I did that. I feel that I was riding better than the results show, but it’s Arenacross and I need to stop making silly mistakes and then hopefully next weekend’s results will be much stronger.

Paul Hobbs (Team Manager) – It’s been a really good weekend and we couldn’t have asked for anymore. Both riders qualified for the Main Events each nights and Steven winning the first night and sitting second in the Championship is great for the team.