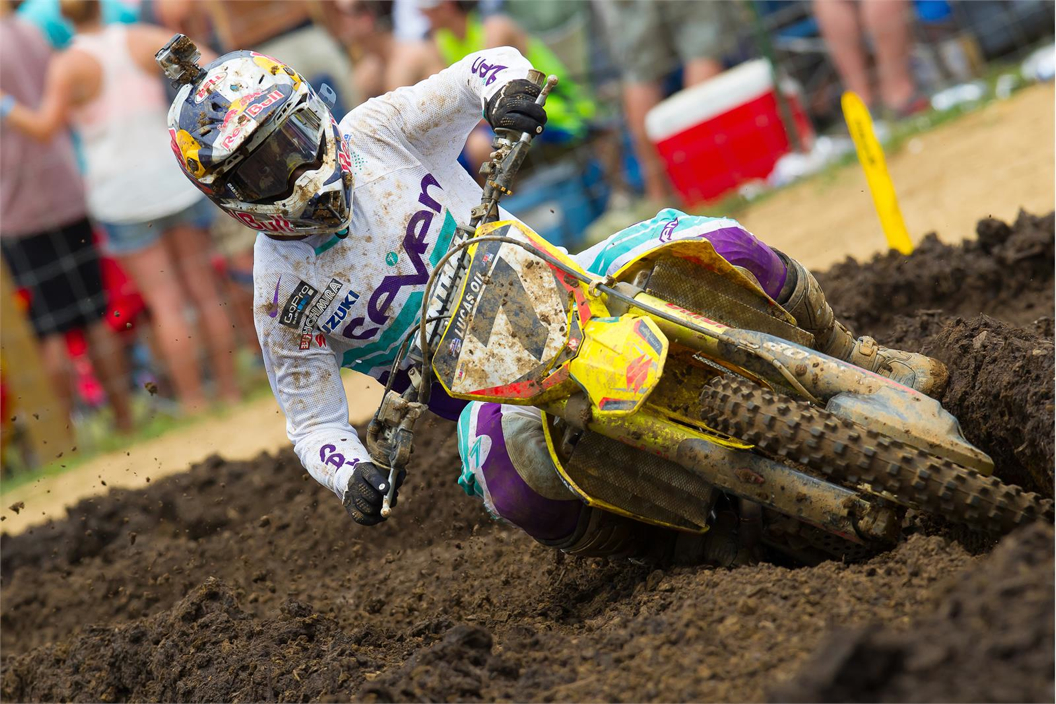 Question: Based on what you have seen so far, who do you think is going to win the 250MX title, and why?

Lewis Phillips: Blake Baggett is undoubtedly the favourite in my eyes. I’m aware that he is third in the standings, and a little way off of Jeremy Martin, but he is back! Since Thunder Valley, Blake has showcased the same speed and finesse that we saw in his title winning year, and it seems he has also found the key to consistency, which is bad news for his competition. Cooper Webb may be a dark horse, as he has quietly been there each week, and seemingly has the speed – the biggest question mark in my eyes is whether he can be a race win contender at every round, which he will need to be.

Jeremy Martin is an unknown quantity to me, which seems bizarre following his performance at the first two rounds. The series leader seems to have lost that edge that he had, as the main protaginists in the title fight have caught up to him, which must be worrying for his camp. Martin desperately needs to recapture that form as soon as possible, and establish himself as the man to beat again, before he gets swallowed up.

James Dunford: I’m really intrigued as to the way this title has developed. At the start of the season, Martin stunned me. I didn’t expect to see that much speed from him, and I don’t think anyone else did. After round four, I’d have looked crazy to bet on anyone else, but times have changed.

You can’t ignore Blake Baggett now. He’s won this title before, is on a solid (if not as good as it has been) bike, and has a good team behind him. Rumours are rife that Blake will be leaving PC at the end of this season, but that seems like an odd move to me. He’s got the experience, speed, fitness and mentality to win again. Jason Anderson has had a tough season, Cooper Webb looks fast but I don’t think he’s championship material (yet), and Justin Bogle looks to have speed, just not quite enough for the top, yet. Pourcel is coming through, but is a way off right now.

James Burfield: I’ve been super impressed with Martin this year, and his domination in the first five races really did show how much he has progressed over the past few months. I know Blake has got the upper hand at the moment, but I expect Martin to fight back at the next few rounds. He’s got a great thing going at the Carmichael farm, and having Ricky in your corner has definitely got to help you when you are looking to win a championship, so my money right now is on Martin. But with Bogle, Pourcel and Webb in the mix, it’s going to be an awesome championship.

Question: Fredrik Noren has been signed as the Muscle Milk Honda fill-in. Who do you think should have got the spot?

Lewis Phillips: It would have been very cool to see Ben Townley get the spot, although I’m not sure how well it would have gone. But, it’s always great to see a privateer get a shot, especially Noren, who has travelled all the way from Sweden and is quietly posting some impressive finishes. I am bummed for Jimmy Albertson though, as I feel he missed out on an opportunity here. If only he had been a little stronger at the first couple of rounds.

James Dunford: I actually think it’s really cool when these guys get the chance to leave privateer island (hat tip to Steve Matthes) and ride on a factory bike. We’ve witnessed Peick’s strong start to the season, and although Fredrik doesn’t quite have the speed yet, this could be his big break. The age-old privateer debate of “if only I had the bike!” is really being tested this season, so let’s cross our fingers and hopefully watch another Euro dial the bike in and get some results.

James Burfield: Part of me says this was down to who is available at the moment, and that Noren is a rider that is going ok and doesn’t have a contract. The other part of me is thinking that this is a really cool publicity thing to win the fans over. Everyone loves an underdog, and maybe Muscle Milk Honda wondered what they have to lose, after seeing what Peick has done over at RCH.  I would have liked to see Ben LaMay to have got the nod personally, but fairplay to Noren,

Question: Will James Stewart make it to every race this season, or miss a few?

Lewis Phillips: With James Stewart, you can never be sure that he will make it to every round, and with all of this controversy that is overshadowing him at the moment, I think his chances are even lower. When James’ test results from Thunder Valley come back, there is still a chance that he will get suspended by MX Sports, so that may hinder him later in the year. There is also the threat of a big crash ruling him out, and James has already had a few of them this year. But, for the sake of the sport, I hope he makes it through – Lucas Oil Pro Motocross needs him.

James Dunford: [Disclaimer: I’m part of the James Stewart appreciation society] I would really, really like to say yes, because without the current controversy, I think he would. He’s a very different man to last year and even more so to the previous year. Determination, grit and downright brilliance had all started to come together, which looked like it could prove to be a formidable package. Having said that, the WADA hearing is coming up (at some point) and I feel like something major will happen. Initially, I wasn’t as worried but hearing the latest news it sounds like a ban is going to happen, which is very disappointing, especially for such a minor offence.

James Burfield: If the ban had not come up I would have said yes, he’ll be at every round. But with a potential ban looming, it’s not looking great. If the ban does happen, I wonder if he’ll just wipe his hands with it all and retire?