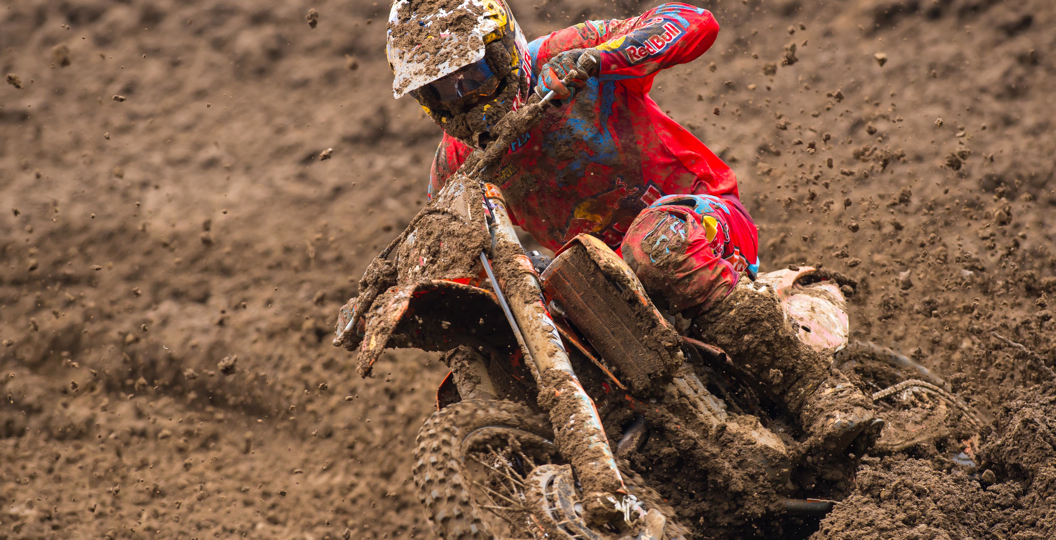 The 250MX title fight is over, but an interesting fight for second has developed. Who do you think will leave Utah with the spot; Cooper Webb, Blake Baggett or Marvin Musquin?

James Dunford: Firstly, I’ll start by congratulating JMart. I’ve got to be honest, I didn’t for one moment think he could wrap this title up – especially with one round to go, top job fella – I’ll buy you a Rockstar at the MXdN! Onto second, and this does look interesting. It’s crazy to think that Musquin could finish second considering his start to the year, but no one else has really been consistent. Baggett has looked woeful of late (he needs to leave Pro Circuit) and Cooper looks to have been off form a little – the Frenchie for me.

Jonathan McCready: I think I’ll still go with Baggett as long as it’s sunny next week! Blake can be inconsistent at times but when he is on he is really on and next week he will want to end on a high. Musquin needs more technical tracks for his talent to really shine in the US, he might just come up short for second place, his injury and slow start to the season cost him a shot at the championship, unfortunately for him. Webb has been impressive this year but similar to Baggett is prone to the odd bad moto and he might just end up fourth in the series.

Lewis Phillips: There has to be a lot on the line for all three of these guys, as I’m sure their bonuses for second and third are much higher than fourth. Honestly I think that Marvin Musquin is going to steal it. If you look at the last three rounds, I would say he has been the strongest overall, which sets him up well heading into Utah. He may need a little luck to overcome the gap, but following the inconsistent outings that the other two have had recently it shouldn’t be too hard.

When it started raining in Indiana, did you welcome it or would you have preferred the weather to not be a factor in the 450MX title fight between Ken Roczen and Ryan Dungey?

James Dunford: As much as I’d have liked everyone else to be better in the wet, it sure made for some interesting watching! The field ended up being so spread out in comparison to usual, it seemed odd. Everyone likes a mud race once in a while, but that certainly took it to a new level. At the end of the day, a champion needs to be a champion rain or shine, so on balance I think Kenny came out and showed he’s worthy.

Jonathan McCready: I welcomed it, as Ken Roczen said it’s usually sunny and flat out in the USA so it was good to see the riders have to adapt to something different. Unfortunately for Dungey he couldn’t adapt as well as Roczen, but being able to adapt is part of what makes a champion and the muddy conditions definitely favoured Roczen’s versatility and his GP experience. It definitely made the racing more interesting this weekend with different riders getting their chance to shine.

Lewis Phillips: I have seen a few people state that it is a shame that the title fight was decided by a mudder, but this thing isn’t over yet, folks and honestly, Dungey didn’t lose the title in Indiana, he lost it at the start of the year. You have to be the best in all conditions to be a champion, too; this is the outdoors – rain is to be expected! For this reason, I am quite happy that the conditions were drastically different this past weekend. Although it was a shame for the guys that own the facility, as the track looked like heaven before the rains came. But who doesn’t like a mudder once in a while?

When you look back on the season, who is one rider that has really impressed you (aside from the obvious frontrunners of course)?

James Dunford: Technically, considering he’s not a front runner at the moment, James Stewart? Okay, I’ll move on… Good question, and a tough one. Pourcel impressed me (yes, I know he’s technically a front runner, but those Oakley bomb awards can’t be ignored!), Peick has been solid, Craig on his select outings showed good pace and Shorty has been solid. Noren has been fast lately, but I’ve got to end it on Nelson –  a couple of stand out rides (don’t forget that “nearly” win), and last weekend’s victory tip the scales for me.

Jonathan McCready: Justin Bogle, he kind of won the supercross title by default after all the leading contenders got hurt, but his outdoor performances probably outweighed his supercross performances for me. Bogle was there all year battling for top five and podiums and I don’t think many people expected him to be so consistent outdoors. Bogle finally delivered on his potential this year and it should set him up for race wins next season.

Lewis Phillips: I’ve got a lot of names running through my mind right now, but following his moto win this past weekend, Jessy Nelson is at the forefront of my mind. Jessy had a so-so supercross season, but has really excelled at different points since the outdoors begun. He started off with a bang, then hit a bit of a mid-season slump, but he earned that win in Indiana! He showed real composure in the difficult conditions; it would have been so easy to get caught up in the moment. I should also tip my hat to Joey Savatgy; he has been much better than I ever imagined recently, and I certainly wouldn’t have had him on the podium at the start of the year.